Assam..... a rich, green land of rolling hills, plains and dense forests, is the gateway to the North Eastern part of India. The mighty Brahmaputra River that has its origin near Lake Mansarovar and Mount Kailash, prayed to by four religions of Hindus, Buddhists, Jains and Bonpas, charts its course through Tibet, Assam and Bangladesh. Assam, the mystic land of blue hills and beautiful rivers, is renowned for it's tea, rich flora and fauna.

Its "Big Four" include the great single horned rhinos, elephants, wild buffaloes and the tigers. Fresh water dolphins in the river and great bird like the Great Hornbills, Great Adjutant Storks and the Black Necked Cranes. These all along with, over six hundred varieties of migratory and domestic birds, other mammals like deers, apes like the Hollock Gibbons, turtles & tortoises, makes this as one of the greatest natural habitats and varieties of wildlife outside of Africa. National Geographic board members said in January, 2011 that this was the Serengeti of India.

The Brahmaputra River is the only navigable river in the world from which you can see 7400 mtrs high, snow covered Himalayan mountains. It is also the only river, apart from the River Zambezi in Africa, from which elephant, jeep and boat safaris are conducted. The visit to temples, tribal villages, monasteries, ancient palaces and tea estates gives a great "Living Cultures" experience.

Situated between 90-96 degrees East Longitude and 24-28 degrees North Latitude, Assam is bordering on the North and East by the Kingdom of Bhutan and Arunachal Pradesh. Along the South East lies Nagaland, Manipur and Mizoram. Meghalaya and Bangladesh are South, while West Bengal lies to the West. 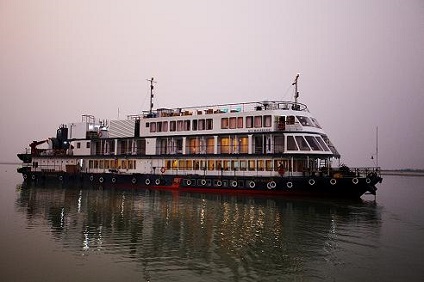 Assam..... a rich, green land of rolling hills, plains and dense forests, is the gateway to the northeastern part of India.... 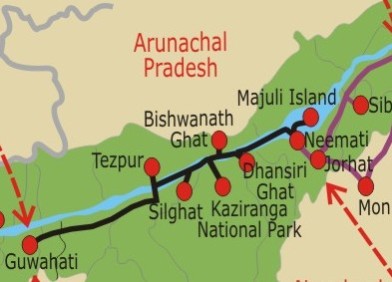 Our chefs devise local/Indian and Continental cuisine menus using locally sourced ingredients. All meals inclusive of tea and coffee served in the main indoor dining restaurant. Given advance notice, all dietary requirements can be catered for, along with the guest preferred alcoholic beverages.

It is recommended that children above the age of six years be booked as passengers. They would be the sole responsibility of the parents/guardians and must never be left unattended.