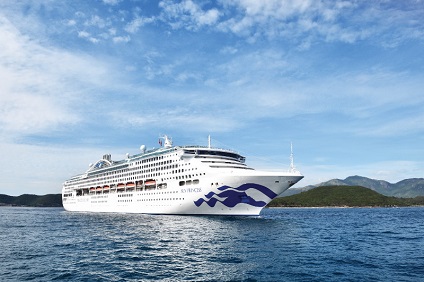 12 Night Cruise sailing from Perth to Singapore aboard Sun Princess.

Kuala Lumpur
From a lawless huddle of kampongs in the trackless jungle, Kuala Lumpur has grown into a fascinating metropolis. Steel and glass towers stand side by side with graceful stone colonial buildings and mosques adorned with slender minarets. The commercial and cultural heart of Malaysia, Kuala Lumpur (better known as KL), is a melting pot. Its population of one million is comprised of Malays, Chinese, Arabs, Hindus, Eurasians and Europeans.

Kuala Lumpur is located at the confluence of the Klang and Gombek Rivers. The city was founded in the 1850s as a tin mining outpost.

Penang
In 1786 Francis Light persuaded the Sultan of Kedah to cede Pulau Pinang - the "Isle of Betel nut" - to the English crown. Legend has it that Light persuaded his men to clear the overgrown island of Penang by firing a cannon filled with gold coins into the jungle as an incentive. The island was renamed Prince of Wales Island, and its major town was christened Georgetown after King George III. Whether the story is true or not, Penang quickly became a major trading port for tea, spices, china and cloth. Here European, Malaysian, Hindu, Arabic and Chinese cultures met, melded and flourished. Today Georgetown is a cosmopolitan city that has preserved its unique heritage and its exotic blend of cultures.

Georgetown is perhaps the best-preserved city in Southeast Asia. It boasts a European-style esplanade and a wealth of temples, mosques and Chinese clan houses. Listed as a UNESCO World Cultural Heritage Site in 2008, this virgin paradise has no shortage of cultural sights and natural scenery.

Langkawi
Langkawi comprises a group of 99 tropical islands lying off the northwestern coast of Peninsular Malaysia. The main island is known as Pulau Langkawi. The islands are shrouded with an intriguing heritage of myths and legends that feature ogres and gigantic birds, warriors and fairy princesses, battles and romance. Langkawi has been accorded the Geopark status by UNESCO, for its beautiful geological heritage of stunning landscapes, karsts, caves, sea-arches, stacks, glacial dropstones and fossils. With a geological history dating back 500 million years, the islands contain unique rock formations that stir the imagination and baffle the mind.

Phuket
Hailed as the "Pearl of the Andaman Sea," this island off Thailand's long southern coast boasts a colorful history. A crossroads for trade, Phuket has been a melting pot of Thai, Malay, Chinese and Western influences. Its importance over the past 500 years stemmed from the island's natural resources, which include tin, hardwoods and rubber. In the past half-century, Phuket has enjoyed wide popularity as one of the premier travel destinations in Southeast Asia. Travelers are drawn to the island's beaches, crystalline waters, and dramatic, forested hills.

Singapore
Singapore - the very name summons visions of the mysterious East. The commercial center of Southeast Asia, this island city-state of four million people is a metropolis of modern high-rise buildings, Chinese shop-houses with red-tiled roofs, sturdy Victorian buildings, Buddhist temples and Arab bazaars. Founded in 1819 by Sir Stamford Raffles of the fabled East India Company, the city is a melting pot of people and cultures. Malay, Chinese, English and Tamil are official languages. Buddhism, Taoism, Islam, Hinduism and Christianity are the major faiths. Singapore is an ever-fascinating island boasting colorful traditions, luxurious hotels and some of the finest duty-free shopping in the world.

Lying just 85 miles north of the Equator at the tip of the Malay Peninsula, the island was a haven for Malay pirates and Chinese and Arab traders. 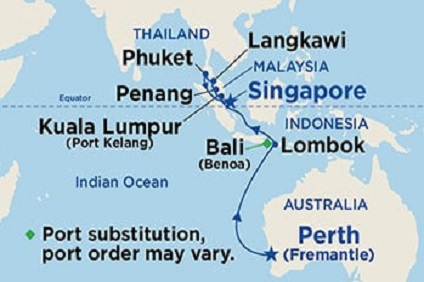 *Conditions Apply: Prices are per person, capacity controlled and listed in Australian dollars twin share including port taxes. Prices may fluctuate if surcharges, fees, taxes or currency change, and may be withdrawn at any time. Prices shown here are not shown in real time. While we endeavour to keep our pricing as up-to-date as possible, the advertised prices shown here may differ from the live prices in our booking system. The prices shown are for a cash payment. Credit card fees of up to 2.5% will apply. Offer correct as at 14Jan20 and subject to live availability at time of booking. Prices are per person twin share based on best available cruise fare, inclusive of all discounts unless otherwise stated. All offers are capacity controlled and can be withdrawn or modified at any time without notice and subject to availability at time of booking. Outside and Balcony cabins may have obstructed views and Suite cabins comprises Junior Suites, Mini Suites and any other type of suite that represents the best value for each cruise. Unless otherwise stated, onboard gratuities are NOT included. All passports, vaccinations and visas are the responsibility of the travelling guest to secure prior to departure from Australia. #Airfare, hotels and tour prices are based on 2020 prices and as such subject to change until bookable at approximately the end of May 2020. These fares/prices may change due to availability or currency fluctuations and all prices listed here are best considered `guestimates` except for cruise prices/offers. ~Specialty restaurants may incur a surcharge. ^Bonus Credit is in AU Dollars, a total per twin cabin and is non-transferrable and non-refundable. Onboard credit cannot be used at the medical centre or casino. All unused on board credit is forfeit on final night. Bonus Onboard Credit offer is subject to the discretion of Princess Cruises and may be withdrawn at any time without prior notice. To be read in conjunction with the Princess Passage Contract available at princess.com/legal/passage_contract/ which passengers will be bound by. Some cruise lines reserve the right to impose a fuel levy if the NMEX price reaches a certain level - please check with your consultant at time of booking. Cruise deposit, amendment and cancellation conditions apply. Travel agent service fees not included. Special conditions apply - please ask for full details at time of enquiry. Offer ends 12Mar20 or until sold out/withdrawn from sale. Please note only residents with an Australian address are eligible to book Australian rates in Australian dollars. This cruise package is provided by Seven Oceans Cruising, please ask your travel agent to contact us for more information. **Oceans of Offers terms and conditions: Fares are per person, in AUD, in complete twin accommodation based on the lead category for each stateroom type, inclusive of all discounts, taxes, fees and port expenses (which are subject to change). Supplements apply for other stateroom categories. Fares based on specific departure dates only. Higher fares may apply to other departure dates listed. Offer ends 12 March 2020 unless sold out prior. Princess Cruises has set aside a reasonable number of staterooms which are available at these fares. Once these staterooms are sold, fares may revert to a higher fare, but may also be discounted. Valid for new bookings and not combinable with any other offer. All offers are subject to availability, not transferable and cannot be redeemed for cash. Some oceanview staterooms have obstructed views. Best Price fare is based on the cruise fare only without any inclusions. Best Value fare is valid for the first two guests in the stateroom when booking select cruises sailing between 5-37 nights departing after 01/04/20. Exclusions include select short getaways and all World Cruise voyages. Best Value fare includes the cruise fare bundled with access to the Premier Beverage Package and Internet at a packaged rate. ^^Premier Beverage Package applies to the first 2 guests in the stateroom when aged 18 years or over (21 years on some international voyages) on the Best Value fare. Exclusions apply, see https://www.princess. com/ships-and-experience/food-and-dining/beverages/ for full details. Service of alcohol is always subject to Princess Cruises RSA Policies. Guests under legal drinking age will receive the Premier Coffee & Soda package. #On Golden Princess, Sapphire Princess and Star Princess: guests receive 5000 minutes of internet access per person per cruise across multiple devices. On Sea Princess, Sun Princess, Majestic Princess, Diamond Princess and Pacific Princess: the Premium PrincessCONNECT Internet Package applies and usage is unlimited across multiple devices in a stateroom (accessed through one device at a time only). All Medallion class ships: unlimited MedallionNet package applies, which is limited to 1 device per passenger and up to 4 passengers in the stateroom. For full conditions including usage limitations, see https://www.princess.com/ships-and-experience/ocean-medallion/medallionnet/. < Best Price 3rd and 4th guest fare based on lead stateroom when travelling with two adult twin fare paying passengers in the same stateroom, and is subject to stateroom configuration and availability. Best Value fare does not apply by default to 3rd and 4th guests, they can choose to opt into the fare. To be read in conjunction with the Booking and Passage Conditions available at princess.com/legal/passage_contract which passengers will be bound by. Travel agents may charge additional fees - check with your travel agent.