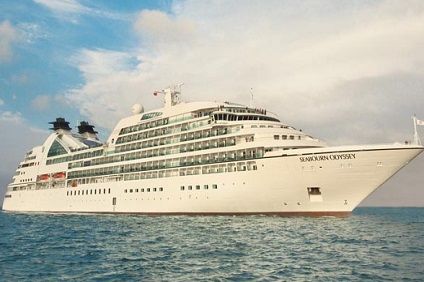 GREEK ISLAND ODYSSEY Fly, Cruise & Stay package includes:
- Return economy airfare with full service carrier from Sydney or Melbourne to Athens
- 3 nights 5 star accommodation in Athens+
- Full Day Delphi Tour with lunch - Follow in the footsteps of kings and make a pilgrimage to discover your destiny with this day trip to Delphi
- 2 Hour Dinner in the Sky - Dinner in the Sky takes you to heaven, while the nightlife of Athens “awakens”
- 14 night Greek Islands Odyssey cruise onboard Seabourn Odyssey from Athens return
- Welcome Champagne and complimentary in-suite bar stocked with your preferences
- All dining venues are complimentary, dine where, when and with whom you wish
- Complimentary premium spirits and fine wines available on board at all times
- Tipping is neither required, nor expected
- Airport taxes, Port charges and government fees

Seabourn Odyssey is the first in a new-class of ships for Seabourn that will accommodating just 450 guests in 225 luxury suites. Although, at 32,000 GRT, Seabourn Odyssey is more than triple the size of Seabourn Pride, Seabourn Spirit and Seabourn Legend, she was the smallest new ship being built by any major cruise line, and her guest capacity is just twice that of the smaller sisters, creating the highest space-per-guest ratio in the industry.

Piraeus (Athens), Greece
Piraeus has been the port for Athens since 482 BC. The busy harbor is filled with ferries and cruise ships making their way to the Greek Islands and other Mediterranean cities. The busy metropolis of Athens and its treasure trove of antiquities lie just a few miles from the port. Even as the reality of the modern city took hold, with its high-rise apartments, crowded sidewalks and bustling traffic, the beauty of the Acropolis, the outstanding museums, charming cafés, sidewalk markets and startling views come together in a cultural mosaic for all to enjoy.

Mykonos, Greece
The quintessential Greek island of Mykonos is marked by whitewashed houses, domed churches, imposing windmills, and a labyrinth of winding streets designed to disorient pirates. Everywhere there is a dash of bright, bold blue - doors, shutters and window frames, sea and sky. The harbor bustles with colorful fishing boats, vendors selling fish and locals gathered with visitors in the casual seaside cafes. The port even comes with two beloved mascots, the pelicans Petros and Irini.

Ermoupolis, Nisos Syros, Greece
Syros is an important island in the Cyclades, but rather off the tourist map. Just the sort of place we like. The town (named for Hermes) is the capital of the island group, and its airy Miaouli Plaza is a wonderful, palm-lined place to sit in a cafe and have a drink. The medieval Venetian village of Ano Syros crowns a hilltop nearby. Wander the narrow, cobblestone streets to the impressive 13th-century Agios Georgios church. Back in town, the Eastern Orthodox Church of the Assumption holds an icon by the Greek painter known as El Greco. A small archeological museum has some very fine Cycladic figures, and the Ermoupolis Industrial Museum recounts the island legacy of shipbuilding and other occupations.

Agios Nikolaos, Crete, Greece
This charming village of white houses climbing up the slopes is beautifully situated on the sparkling Gulf of Mirabello. The attractive Venetian harbor is surrounded by restaurants, outdoor cafes and clusters of shops selling everything from necessities to souvenirs. The ship docks in the center of town, and you are able to wander at will and enjoy the atmosphere of Crete's foremost resort.

Syracuse, Italy
Once home to Archimedes, Plato and Aeschylus during its height of power and prestige, Syracuse is superbly situated at the head of a beautiful bay and enjoys a mild climate.

Valletta, Malta
Occupied successively by the Phoenicians, Greeks, Carthaginians, Romans, Arabs, French and British, Malta has been of strategic importance throughout history. A British Crown Colony until 1964, Malta received the George Cross for its valiant resistance to German occupation in WWII. The island's rich heritage is reflected in the architecture of Valletta, the current capital, and Medina, the capital until 1565. In Valletta the Knights of St. John built such masterpieces as St. John's Co-Cathedral and the Palace of the Grand Masters, along with the fortifications that guard the town's magnificent harbors.

Mgarr (Victoria), Gozo, Malta
A port not often visited by cruise ships, being more accustomed to welcoming fishing boats and private yachts. Malta’s smaller sister-isle has a lot of charm to offer. Villages such as Mgarr all boast tall, elaborately carved churches, the result of a combination of fine-grained, easily carved stone, time, and stonemasons whose skill is matched only by their religious devotion. The city of Victoria was so named to honor the British queen’s Diamond jubilee.

Thira (Santorini), Greece
"Thira, the Wild Island" and "Kalliste, the Fairest One" - all terms of endearment for this seductive, volcanic Greek island in the Sea of Crete. Extraordinary for its black sand beaches and sheer limestone cliffs, Santorini also showcases remnants of the Phoenician, Spartan and Minoan cultures, which fell under the island's spell - an unvarying, irresistible lure that continues to this day. Fira, the picturesque, pedestrian-only capital, is reached from the seaport via a short cable car ride that offers thrilling views as you ascend.

Rhodes, Greece
Best known of the Dodecanese Islands, Rhodes is a fascinating architectural patchwork of her past. Here the legacy of the ancient Greeks mingles with that of besieging Turks, crusading knights, and occupying Italians. Twin bronze deer, the symbol of Rhodes, guard the Mandraki Harbor where the 100-foot Colossus is said to have stood, a wonder of the ancient world. The medieval Crusader City is dominated by the Palace of the Grand Masters, while cobbled streets lead to the bustling bazaar and a lively harbor that is a center of the international yachting scene.

Symi, Greece
Symi town harbor is tucked into one of the island’s many corrugated coves, many of which enfold sand beaches. The island is located just offshore of the Turkish coast in the Dodecanese chain near Rhodes. The harbor is fronted by ranks of unusually colorful neoclassical houses, and steps lead to the upper town of Ano Symi and the requisite Kastro. The Monastery of Archangel Michael Panormitis is an important pilgrimage site for the Greek Orthodox adherents and boasts a likewise unusually colorful and elaborate bell tower. The town has thirteen major churches and dozens of chapels, many dating to the Byzantine era of its multifaceted history. Also in the harbor is a War Memorial with a bas relief of an ancient trireme fronted by a Dove of Peace.

*Conditions Apply: Prices are per person, capacity controlled and listed in Australian dollars twin share including port taxes. Prices may fluctuate if surcharges, fees, taxes or currency change, and may be withdrawn at any time. Prices shown here are not shown in real time. While we endeavour to keep our pricing as up-to-date as possible, the advertised prices shown here may differ from the live prices in our booking system. The prices shown are for a cash payment. Credit card fees of up to 2.5% will apply. Offer correct as at 12Dec19 and subject to live availability at time of booking. Prices are per person twin share based on best available cruise fare, inclusive of all discounts unless otherwise stated. All offers are capacity controlled and can be withdrawn or modified at any time without notice and subject to availability at time of booking. Outside and Balcony cabins may have obstructed views and Suite cabins comprises Junior Suites, Mini Suites and any other type of suite that represents the best value for each cruise. Unless otherwise stated, all packages containing airfare will require full airfare and taxes within 24 hours of reservation and cancellation/amendment conditions apply. Air taxes are included in package price and are subject to change depending on departure city. +Hotels in certain cities must charge local government tax directly to guests upon checkout which cannot be collected in advance by our agency. All passports, vaccinations and visas are the responsibility of the travelling guest to secure prior to departure from Australia. Some cruise lines reserve the right to impose a fuel levy if the NMEX price reaches a certain level - please check with your consultant at time of booking. Cruise deposit, amendment and cancellation conditions apply. Travel agent service fees not included. Special conditions apply - please ask for full details at time of enquiry. Offer ends 28Feb20 or until sold out/withdrawn from sale. Please note only residents with an Australian address are eligible to book Australian rates in Australian dollars. This cruise package is provided by Seven Oceans Cruising, please ask your travel agent to contact us for more information. ^^SIGNATURE SAVINGS EVENT terms and conditions: All prices stated are per guest based on double occupance and include taxes, fees & port expenses. Fares are in Australian dollars. All savings amounts are included in the fares shown. Shipboard Credit offers are in U.S. dollars and are non-refundable, non-transferable, have no cash value, expire at the end of the cruise, may not be used in the casino and are not combinable with other shipboard credit offers. Air credit is available on select sailings for flights booked through Seabourn’s Flight Ease® program. Air credit is available to the first and second guests sharing a Suite and is non-transferable. Air must be booked no less than 30 days prior to sail date in order to be eligible for the air credit. Seats are limited and may not be available on every flight. Once air is booked, please check with the airline’s website or contact the airline directly for information regarding baggage fees and other charges. Each airline has its own baggage allowance policy. Guests are responsible for all baggage fees, including excess baggage imposed directly by the airline. Internet Packages of 300, 600 or 900 minutes of internet access are offered per guest and are only applicable to the 1st & 2nd guest in Ocean View & Veranda Suites. Unlimited Internet Package is offered on a per Suite basis and only applicable to Suite categories PH, PS, OW, SS, WG & GR. Internet service is not guaranteed. Seabourn is not responsible if internet service is unavailable. No credit or other compensation will be provided should internet service not be available. Reduced Deposit offer is valid on select sailings that are outside of penalty periods. Reduced Deposit amount is taken off of the standard deposit policy amounts. All offers are capacity controlled and may be modified or withdrawn at any time without prior notice.Other restrictions may apply. To be read in conjunction with the Seabourn Passage contract www.seabourn.com which guests will be bound by. Whilst all information is correct at time of publication, offers are subject to change or withdrawal. Carnival plc trading as Carnival Australia ABN 23 107 998 443 as agent for Seabourn. Ships’ registry: Bahamas. ©2019 Seabourn.