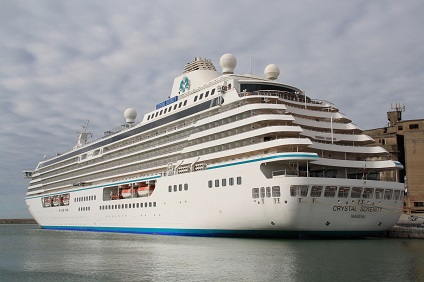 CONNOISSEUR'S COLLECTION Fly, Cruise & Stay package includes:
- Return economy class airfare with a full service carrier from Sydney to Athens return from Barcelona
- 2 nights accommodation in a 5-star hotel in Athens including breakfast+
- 3 Hour Taste of Athens Tour - Discover the traditional tastes and fresh flavours of Athens and learn all about Athens' culinary culture from a local guide
- 12 night Connoisseur's Collection Cruise onboard Crystal Serenity from Athens to Barcelona
- Fine wines, champagnes, premium spirits and specialty coffees
- Michelin-inspired cuisine and 24-hour in-suite dining
- Butler service in every suite
- Specialty~dining
- Unlimited Wi-Fi/Internet access
- Twice-daily housekeeping with nightly turndown service
- Complimentary launderettes
- Pre-paid gratuities
- Complimentary “You Care. We Care.” Voluntourism
- 2 nights accommodation in a 5-star hotel in Barcelona including breakfast+
- Half Day Barcelona Highlights Tour - Half-day excursion around Barcelona that will allow you to discover the history of the city while visiting some of the most important places in a comfortable and easy way.
- Airport taxes, Port charges and government fees

12 Night cruise sailing from Athens to Barcelona aboard Crystal Serenity.

The Parthenon, Pompeii, the Coliseum and Sagrada Familia. Adventures to Tuscany, Aix-en-Provence and the Amalfi Coast. From the white-washed homes of Santorini to the commanding palace in Monaco, the Mediterranean at its finest.

Athens,Piraeus, Greece
Piraeus is Greece's largest port and has been a gateway to the Mediterranean since 482 BC. It lies on the innermost point of the Saronic Gulf and is a short drive from Athens, the cradle of Western democracy and culture. Throughout the ages, Athens' lofty Acropolis has been a source of inspiration. The ancient ruins scattered throughout this legendary city are reminders of Greece's great cultural heritage.

Santorini, Thíra, Greece
Of all the Cyclades Islands, Santorini is often considered the most dramatic. Once an active volcano, it was known as Stongyle, or the Round Island. In about 1500 BC, the volcano erupted with such force that the center of the island literally exploded, leaving the haunting submerged crater into which Crystal sails. The island's small villages were preserved in the ashes and recent excavations have uncovered a fascinating view of everyday life from 3,500 years ago.

Santorini's dark landscape offsets its simple, yet refined Cycladic buildings, which glimmer in the sunlight. The rich volcanic soil is ideal for grapes and the local vines produce a cherished crop known for its "special volcanic taste."

Thíra, or Fira Town, is laid out along the edge of a cliff that partially forms the rim of the now extinct caldera. A picturesque site, it exudes charm and an atmosphere of leisure that can be attributed to the easy-going Greek lifestyle.

Sicily, Catania, Italy
On a fertile plain surrounded by mountain slopes and the sea, Catania, the economic center of Sicily's richest area is nestled snugly in a hollow. Once an important Greek and Roman colony, it is now a thriving commercial and industrial center. Though the city sometimes appears chaotic, it retains a certain beauty in the graceful elegance of its old buildings. Above the city rises Europe's largest volcano, mighty Mt. Etna. North, along the coast, picturesque Taormina beckons one and all.

Renowned for its serene way of life, this romantic port exudes a special magic. Its dramatic bluffs and surrounding flowered hills bid travelers welcome to a town overflowing with charm and character. It is easy to relax in this languid southern Italian atmosphere.
The sensational Amalfi Coast and the haunting ruins at Pompeii are among the region's highlights.

Rome ,Civitavecchia, Italy
Civitavecchia was founded by Emperor Trajan in the 2nd century. Today this port is noted for its fine seafood and attractive monuments. Located 90 minutes away is the Eternal City of Rome. Steeped in 2,500 years of history, Rome was for many centuries the center of Western civilization. It was both the focal point of the Roman Empire and of Christendom. Landmarks such as the Colosseum, Forum, Pantheon, Vatican, Sistine Chapel and Spanish Steps are reminders of the legacy of its rich past.

Cassis, France
Take a picture of Cassis and you have an instant work of art, colorful and painterly in the manner of the French Impressionists. Certainly, the lively fishing port has all the elements to inspire a timeless composition: vibrantly hued boats bobbing in the harbor, rugged hills carpeted with luxuriant shrubbery, a headland crowned by a rocky plateau (called Cap Canaille), and a 14th-century castle, today a privately owned hotel, overlooking it all. Take a walk from town or board a boat to discover Cassis’s renowned calanques, steep-walled inlets with turquoise waters and small beaches. Naturally, you will want to have your camera ready to memorialize these and other sights, including the old fountains and open-air markets of the village and, farther afield, acres of vineyards and pine groves.

*Conditions Apply: Prices are per person, capacity controlled and listed in Australian dollars twin share including port taxes. Prices may fluctuate if surcharges, fees, taxes or currency change, and may be withdrawn at any time. Prices shown here are not shown in real time. While we endeavour to keep our pricing as up-to-date as possible, the advertised prices shown here may differ from the live prices in our booking system. The prices shown are for a cash payment. Credit card fees of up to 2.5% will apply. Offer correct as at 13Nov19 and subject to live availability at time of booking. Prices are per person twin share based on best available cruise fare, inclusive of all discounts unless otherwise stated. All offers are capacity controlled and can be withdrawn or modified at any time without notice and subject to availability at time of booking. Outside and Balcony cabins may have obstructed views and Suite cabins comprises Junior Suites, Mini Suites and any other type of suite that represents the best value for each cruise. Unless otherwise stated, all packages containing airfare will require full airfare and taxes within 24 hours of reservation and cancellation/amendment conditions apply. Air taxes are included in package price and are subject to change depending on departure city. ~Specialty restaurants may incur a surcharge. Onboard gratuities are included and may not be removed from pricing. Cabins are based on guarantee and cabin number will not be assigned until documentation or embarkation. +Hotels in certain cities must charge local government tax directly to guests upon checkout which cannot be collected in advance by our agency. Some transfers have local speaking drivers only. All passports, vaccinations and visas are the responsibility of the travelling guest to secure prior to departure from Australia. Some cruise lines reserve the right to impose a fuel levy if the NMEX price reaches a certain level - please check with your consultant at time of booking. Cruise deposit, amendment and cancellation conditions apply. Travel agent service fees not included. Special conditions apply - please ask for full details at time of enquiry. Offer ends 31JMar20 or until sold out/withdrawn from sale. Please note only residents with an Australian address are eligible to book Australian rates in Australian dollars. This cruise package is provided by Seven Oceans Cruising, please ask your travel agent to contact us for more information. Barcelona Park Guell Istock image credit: member no 6438912 / 13336761 image 534846887.