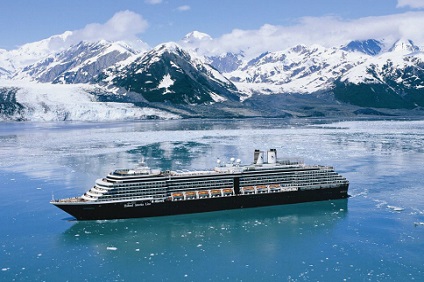 23 Night Cruise sailing from Vancouver to San Antonio onboard Westerdam.

Recently updated with new bar, entertainment and dining venues, plus completely reimagined suites, Westerdam is a fascinating destination in her own right. On board, enjoy live entertainment with Music Walk™, including Lincoln Center Stage, B.B. King’s Blues Club and Billboard Onboard. Learn culinary skills at a cooking show or hands-on workshop with America’s Test Kitchen. Enrich your travel experience at the new Exploration Central atop the ship.

Vancouver, B.C., CA
Once a trading post and a rough-and-tumble sawmilling settlement, today modern Vancouver, Canada is many things. It’s a bustling seaport, a hub for outdoor enthusiasts looking for active things to do in Vancouver, an ethnically diverse metropolis and Hollywood of the North. Hemmed in by mountains and sea, Vancouver seduces visitors with its combination of urban sophistication and laid-back attitude against a backdrop of glass towers and modern sights and plentiful green spaces.

Los Angeles
Nestled up in the hills is the Hollywood sign, marketing this city as the entertainment capital of the world. Stroll glamorous Rodeo Drive in Beverly Hills, take a drive to Malibu or soak up the beach scene on Venice's colorful boardwalk.

Huatulco, Mexico
Huatulco, situated on Mexico's Pacific Coast in the state of Oaxaca, has nine bays and 36 beaches, offering more than enough opportunities for fun in the sun. The most popular beach is La Entrega, with clean white sand and calm waters, perfect for snorkeling and swimming . . . or just relaxing. But Huatulco's attractions aren't limited to sand and surf; there are also archaeological sites to explore, rivers to raft, and waterfalls whose pools invite childlike splashing. Bird lovers, in particular, will find Huatulco to be especially captivating. The region is home to more than 225 bird species, including many rare ones and a number that are endemic to Mexico, like the Colima pygmy owl and the wildly colorful orange-breasted bunting and citreoline trogon. Bring your bird list, because you're sure to add new species to your "sighted" column. And the food in Huatulco! The food will give you plenty to write home about. The state of Oaxaca has some of the most iconic dishes in Mexico's culinary repertoire. You won't go home hungry.

Fuerte Amador, Panama
Located west of Panama City at the Pacific entrance to the Panama Canal, Fuerte Amador is a gateway to exploring the many faces of this unique Central American country. The impressive engineering of the canal itself is a wonder to behold; a quick trip to the Miraflores Locks' visitor center with its panoramic observation decks offers the chance to watch behemoth barges thread their way through the legendary manmade waterway. Just minutes from the cruise port, the recently opened Biomuseo is a Frank Gehry–designed natural-history museum dedicated to Panama's ecological marvels. And Fuerte Amador sits within easy taxi distance of Panama City, the bustling, multicultural capital metropolis where visitors can wander a conquistador-era UNESCO World Heritage Site, sip coffee in street cafés and peruse modern malls. For a rural escape, it only takes an hour or two by car to trade the city for the tropical rain forests of Soberanía National Park, where an aerial tram carries passengers through treetops, or to meet Emberá tribespeople in their traditional village along the Chagres River.

Callao (Lima), Peru
Peru's bone-dry capital (only Cairo is drier as far as national capitals go), Lima is a booming energetic metropolis built on ancient foundations millennia in the making. At first she is no looker, but scratch that parched surface below the high-rise offices and dust-settled dwellings and Lima's charms begin to shine: Strikingly preserved pre-Columbian ruins sit defiantly among modern skyscrapers, a cultural potpourri of world-class museums, sun-toasted beaches beautifully illuminated by nightly sunsets and one of the most exciting and dynamic culinary landscapes in the world.

Lima is a tale of two cities. Colonial charms abound in the city's historic center, where impressive plazas—including the cinematic 16th-century Plaza de Armas, the handiwork of Spanish conquistador Francisco Pizarro—are overseen by Baroque and neoclassical cathedrals, palaces, monasteries and remnants of ancient city walls. But a different Lima emerges in the cliff-hugging seaside barrios of Miraflores and Barranco. Miraflores, Lima's modern face, is a bustling enclave of chic restaurants, bars and nightlife, and Barranco is a bohemian resort commune flush with grand casonas converted into atmospheric hotels and eateries. One of the city's allures is navigating between the old and the new.

Coquimbo (La Serena), Chile
Coquimbo may be relatively small for a capital city (it's the seat of the Chilean province Elqui), but between its location along the Pan-American Highway and its status as an important port, Coquimbo receives quite a few domestic and international visitors. Many of them use the city as a jumping-off point from which to explore the attractions of the surrounding Elqui Valley. Reached by the Ruta de Estrellas (Route of the Stars), the valley's vineyards yield to a desert landscape that is home to approximately 70 percent of the world's astronomical observational infrastructure, including nearly a dozen observatories. Other popular out-of-town destinations include southern beach towns like Guanaqueros and Tongoy. Don't rush beyond city limits without checking out Coquimbo's own sights, though; because of its mining and port history, there's been a fair bit of global influence on local life and culture. One place where this influence is evident is the Coquimbo Mosque; while it's a recently built structure, inaugurated in 2007, it's still a testament to the long and fascinating history of this Chilean coastal town.