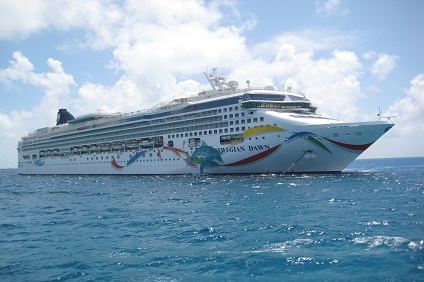 Cruise Package includes:
- 22 Night Wonders of the Mediterranean & Arabia cruise onboard Norwegian Dawn from Dubai to Rome
- Main Meals~ and entertainment onboard
- Port charges and Government fees
- Onboard gratuities

22 NIGHT WONDERS OF THE MEDITERRANEAN & ARABIA CRUISE ONBOARD NORWEGIAN DAWN FROM ROME TO DUBAI!

22 Night Wonders of the Mediterranean and Arabia Cruise sailing from Dubai to Rome onboard Norwegian Dawn.

You'll overnight in Abu Dhabi and Safaga on this 22-day inspiring voyage. Abu Dhabi dazzles with its modern buildings and white sand beaches, yet it's deeply rooted in tradition. Visit Ferrari World Abu Dhabi, the Al Ain Zoo or visit the Sheikh Zayed Mosque that holds 40,000 worshippers. If you're looking to explore ancient riches, Limassol is your gateway to Kourion and 6,000 years of history. Wander the Kolossi Castle, where Richard the Lionheart wed Berengaria of Navarre in 1191. After exploring, find a taverna and try Meze, a hearty meal of numerous small courses. One of your final ports is Athens, the heart of Ancient Greece, where the Parthenon and Acropolis still stand in magnificence. Opened in 2009, the Acropolis Museum is a modern wonder of glass, concrete and steel that houses a collection of 4,000 ancient finds.

Dubai, United Arab Emirates
Experience the blending of traditional Arab culture and modern western culture in Dubai. Gaze skyward to see the tallest building in the world, the 2,722-feet-high futuristic Burj Khalifa tower, or walk over to the impressive Jumeirah Mosque. Seek out jet-set haunts or stroll through the heart of the old city, Dubai Creek, which is home to the Dubai museum as well as the labyrinth alleyways of gold, spice and textile souks, where bargaining is part of the fun and ritual.

Haifa, Israel
Considered one of the Middle East’s most picturesque cities, Haifa offers incredible sights everywhere you turn. It is also close to holy sites – travel to Galilee, Nazareth or Jerusalem. The views from Bahai Gardens on Mount Carmel, the largest hanging gardens in the world, are incredible, and make for a superb picture spot. Peruse the boutiques on Massada Street or go to the artists’ village of Ein Hod for hand-blown glass and crafts.

Safaga, Egypt
Set on the Red Sea, Safaga is a watersports playground. Kite surfing and windsurfing rule here, but diving is also a top attraction with nearby reefs and wrecks. If sun worship is what you seek, the desert sun and black-sand beach will fast-track your sun tan. Experience the splendor of ancient Egypt on an excursion to Luxor, the Karnak Temple Complex and the 3,400-year-old Colossi of Memnon statues.

Suez Canal, Egypt
Connecting Europe and Asia, this canal through the desert challenged engineers for nearly 4,000 years. Egypt's pharaohs attempted to connect the Nile River and Red Sea but gave up, as did Napoleon Bonaparte thousands of years later. Begun in 1858, the 120-mile (193 km.) Suez Canal took 11 years to build. Unlike many other canals in the world, the Suez Canal has no locks because the terrain is so flat. The passage from one sea to the other takes only 11 to 16 hours.

Limassol, Cyprus
A strategic garrison for Richard the Lionhearted during the Third Crusade, Limassol provides many archaeological sites, as well as an array of contemporary designer shops for exploring. The island of Cyprus is also home to two ancient kingdoms - Kourion and Amathus.

Kusadasi, Turkey
Take a journey into the past in richly historic Ephesus. Once an ancient Greek city, Kusadasi was known for the famed Temple of Artemis, one of the Seven Wonders of the Ancient World. Built, destroyed, and rebuilt again through several notably historical periods, Ephesus boasts abounding ruins and archaeological excavation sites. View what remains of the Roman Library of Celsus, the Gate of Augustus, the Tomb of John the Apostle, and the Basilica of St. John, among several other ancient remnants.

Athens (Piraeus), Greece
This is the cradle of civilization, the oldest city in Europe. Not only is this city home to the Acropolis and some of the most important architectural structures and archaeological finds in the Western world, It is also a very modern city, an urban amalgam of extraordinary art, culture, cuisine and shopping.

Rome (Civitavecchia), Italy
Endless adventures await in Rome. With two and a half thousand years of history, art and culture, it is no wonder Rome is one of the most visited cities on the planet. Gaze at the masterpieces of the Vatican or walk into the past with visits to ancient relics, historic monuments and legendary museums. Or people-watch while sipping on an espresso in a quaint cafe. 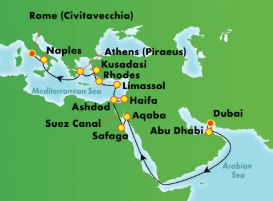 *Conditions Apply: Prices are per person, capacity controlled and listed in Australian dollars twin share including port taxes. Prices may fluctuate if surcharges, fees, taxes or currency change, and may be withdrawn at any time. Prices shown here are not shown in real time. While we endeavour to keep our pricing as up-to-date as possible, the advertised prices shown here may differ from the live prices in our booking system. The prices shown are for a cash payment. Credit card fees of up to 2.5% will apply. Offer correct as at 06Aug19 and subject to live availability at time of booking. Prices are per person twin share based on best available cruise fare, inclusive of all discounts unless otherwise stated. All offers are capacity controlled and can be withdrawn or modified at any time without notice and subject to availability at time of booking. Outside and Balcony cabins may have obstructed views and Suite cabins comprises Junior Suites, Mini Suites and any other type of suite that represents the best value for each cruise. Onboard gratuities are included. ~Specialty restaurants may incur a surcharge. All passports, vaccinations and visas are the responsibility of the travelling guest to secure prior to departure from Australia. Some cruise lines reserve the right to impose a fuel levy if the NMEX price reaches a certain level - please check with your consultant at time of booking. Cruise deposit, amendment and cancellation conditions apply. Travel agent service fees not included. Special conditions apply - please ask for full details at time of enquiry. Please note only residents with an Australian address are eligible to book Australian rates in Australian dollars. This cruise package is provided by Seven Oceans Cruising, please ask your travel agent to contact us for more information.