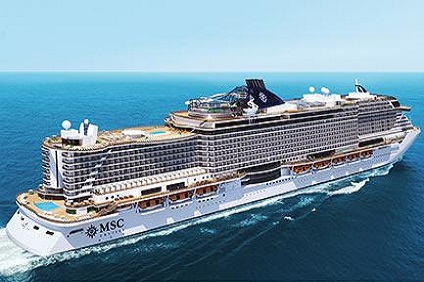 MSC Seaview is the second of two identical ships in the Seaside generation. At 323 metres long with a GRT of 154,000 tonnes, the ship will feature a maximum capacity of 5,429 guests. Inspired by a pioneering beach condo concept, MSC Seaview will bring guests and the sea closer, with special design elements that make the most of the warmer weather. Guests will be able to spend time outdoors eating, drinking and relaxing in the Mediterranean sunshine with some of the best sea views in the world. Guests will also enjoy an increased number of balcony cabins, sea views and public areas, with every element carefully planned to make the most of the sea and the sunshine.

A unique design feature of MSC Seaview is the impressive 360°promenade with glass balustrades that runs around the entire ship. This stunning public space will act as a lively recreation area where guests can stroll in the open air, eat and drink al fresco from a variety of bars and restaurants or shop in the boutiques, all the while providing spectacular sea views as far as the eye can see.

Palma de Mallorca, Spain
The port city of Palma, an MSC Mediterranean Cruises destination, lies on the south coast of Mallorca. Founded in 124 B.C., Palma is celebrated for its medieval streets, jaw-dropping architecture, and ancient fortified walls. See buildings such as the Cathedral of Santa Maria which features designs by Gaudí and one of the world’s largest stained-glass windows, or the Gothic Bellver castle with its circular centre and eye-catching towers. Explore the wonders of Palma de Mallorca on an unforgettable MSC Cruises excursion. Ride a bike or go on foot to see landmark sights across the city. Take in Palma’s most remarkable building: the 14th-century La Seu. Positioned atop the former citadel, this Gothic cathedral was constructed almost 400 years ago. Spanish traditions are kept alive at Balearic Coliseum in Plaza de Toros, a historical arena that still hosts bullfights. Or take a trip to La Almudaina, the glorious summer residence of the Spanish Royal Family.

Valencia, Spain
Formerly a Roman settlement, Valencia is a charismatic port city on the coast of Spain, and an MSC Mediterranean Cruises destination. Its marriage of modern and ancient architecture is a sight to behold – from the futuristic stylings of the City of Arts and Sciences to the 13th-centry Valencia Cathedral. Walk around its avenues and squares and soak up the city’s spellbinding energy. For restful pursuits, take in the beauty of its protected natural wonders including Albufera National Park. The City of Arts and Sciences (Ciudad de las Artes y Ciencias) is an incredible feat of architecture, fresh out of a sci-fi film! See this amazing landmark and more on a Valencia city tour. This unique MSC Cruises excursion will see you exploring this extensive museum and cinema complex, celebrated for the futuristic composition of its buildings, including the Oceanographic Museum. Here, you’ll discover species from diverse aquatic environments, such as penguins, jellyfish, sea lions, sharks, rays, and dolphins. Including on this tour is a visit to Our Lady of the Forsaken Basilica, a 17th-century wonder featuring a domed ceiling with fabulous frescoes. You’ll also enjoy a scenic coach trip through Valencia’s magnificent squares and beautiful avenues.

Marseille, France
On the spectacular coastline of the French Riviera lies Marseille, an MSC Mediterranean Cruises destination. This atmospheric port city is known for its unique mix of grit and glamour, seen in its labyrinth of streets and historical architecture. Only a few miles from Marseille’s charismatic cafes and bustling Vieux Port, stunning cities are to be found. Visit Aix-en-Provence, birthplace of Cézanne, or take in the ancient beauty of Avignon. The seaport of Marseille remains a must-see destination for its culture, colour, and atmosphere. An MSC Cruises excursion will transport you to a characterful world filled with art, architecture, and cuisine. Explore the port and its primary landmark: the Neo-Byzantine basilica Notre-Dame-de-la-Garde, constructed between 1853 and 1864. From the summit, you can take in incredible views over the city and the deep blue Mediterranean. Don’t miss a stroll along Marseille’s waterfront, past the aristocratic Borély Castle and Garden. See Longchamp Palace in the town centre before spending time in the old port.

Genoa, Italy
Genoa is a city and a seaport in northern Italy, the capital of the Province of Genoa and of the region of Liguria.Famous as the birthplace of Christopher Columbus, Genoa remains a bustling seaport. The city's Renaissance heritage is preserved in splendid palaces overlooking the harbor. The Old Quarter of Genoa, is especially enthralling for those who like to explore. It is best to travel on foot through the narrow streets (called carruggi) which are meticulously kept, as are the expansive palazzi (mansions) of medieval merchants which line them. Around the Palazzo Reale, many shops sell Turkish carpets and the best of silk. Other attractions in Genoa include the Palazzo Ducale now used for exhibitions and concerts, the Via Garibaldi art gallery and the original waterfront or Porto Antico. The waterfront is also full of atmosphere and there are many bars and restaurants where one can watch the world go by. The 16th century lighthouse, the Lanterna, which rises over 120 meters (325 steps!) above the sea, can be seen 50 kilometers away, and has guided mariners to the port for 100s of years.

Civitavecchia, Italy
Not far from Civitavecchia lies Rome, one of the most popular cities in the world and is a history lesson in itself. Key sites include the Vatican City, The Forum, the Colosseum and the ruins of the Circus Maximus. There are many museums and art galleries, with works by Raphael, Bottecelli, Pinturicchio and Belini and many more. The Vatican City has many spectacular buildings and churches to visit principle amongst which is the Sistine Chapel with its Michelangelo ceiling. It is the world's smallest independent sovereign state and also features St. Peter's Basilica was built over 1,500 years ago the Vatican Library hand the Vatican Garden. Modern Rome is a city of restaurants, open piazza's, wonderful shopping and more.

Palermo, Italy
The port of Palermo, a buzzing MSC Mediterranean Cruises destination, is the regional capital of the island of Sicily. This cosmopolitan city is known for its heavenly architecture, serious street food, and outrageously beautiful beaches. An MSC Cruises excursion to Palermo will have you marvelling at the city’s wealth of landmarks. See Politeama and Quattro Canti squares, the Palazzo d’Orléans and the remarkable Palatine Chapel. A fusion of Norman, Byzantine, and Fatimid styles, this 12th-century masterpiece features shimmering mosaics, Arabic arches, and a magnificent Muqarnas ceiling. Next, see the Norman Palace and Casa Professa, a breathtaking Baroque church. Finally, wander the Capo, the most frenzied of fish markets, before glimpsing he exterior of the Teatro Massimo opera house.

Cagliari, Sardinia
Sardinia is an Italian island celebrated for its sandy white beaches, mountainous interior, and inviting blue waters. The port city of Cagliari, an MSC Mediterranean Cruises destination, is Sardinia’s vibrant and colourful capital. Its rich past can be seen in the medieval hilltop Castello and in architectural jewels such as Bastione San Remy. Inland, archaeological wonders including the extraordinary Nuraghe are waiting to be discovered. Thousands of prehistoric stone structures known as Nuraghe characterise the landscape of Sardinia. Discover these mysterious bronze age beauties on an MSC Cruises excursion, some which date back to 18th century B.C. This captivating tour takes you to the town of Barumini and its mesmerising Nuragic labyrinth. Crowned a UNESCO World Heritage Site, you’ll explore its fascinating exteriors before venturing inside a three-storey edifice. Return to Cagliari for a tour of the sights including Parco di Monte Urpin. The park boasts panoramic views of the beautiful harbour, the Gulf of Angels, and the golden-hued walls of the ancient Castello.