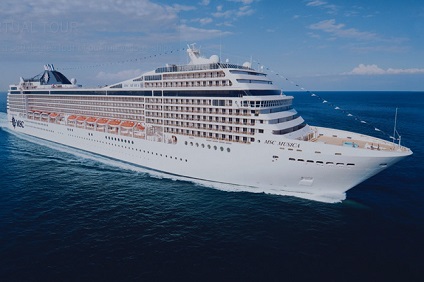 Cruises on the MSC Musica ship embody Italian sophistication and elegance. Our luxury cruise experience aboard the MSC Musica includes spacious staterooms and suites, the majority with private balconies for outstanding views. This wonderful liner offers guests a host of magnificent meeting areas and a glittering array of facilities. Be dazzled by the central foyer on MSC Musica, aglow with a three-tier waterfall and piano suspended over a crystal floor above a pool of luminous water.

Further chances to shine abound in the Crystal Lounge, the fine Havana Club cigar lounge, stylish Kaito Sushi Bar and restful Zen garden, not to mention the superb Italian dining facilities. The elegant design and spacious facilities on MSC Musica also encompass an Internet Café, library, casino and shopping arcade. And for more active pursuits, she offers a tennis court, jogging track and two swimming pools, plus a pool and play area for kids. And with MSC Musica journeying to exotic cruise destinations such as Greece, Croatia and Brazil, you will soon feel in true harmony on whichever cruise you choose!

MSC Musica is the first of MSC Cruises’ ‘Musica-class’ vessels. She became the belle of the ball in Venice on June 29, 2006 where a display of lights and colors celebrated the inauguration of MSC Musica. With Sophia Loren - the ambassador of Italian elegance worldwide - as her godmother, MSC Cruises’ MSC Musica is one of the best examples of sophistication and luxury yet.

Brindisi, Italy
Brindisi is an ancient city in the Italian region of Puglia, the capital of the province of Brindisi. In the 21st century, Brindisi serves as the home base of the San Marco Regiment, a naval brigade originally known as the La Marina Regiment. The city has plenty to offer in terms of quaint little streets, a cosmopolitan atmosphere and interesting nightlife. Brindisi has many beautiful sandy beaches which can be easily reached. The water is a pleasant temperature and is ideal for windsurfing and sailing. There are also plenty of nearby attractions such as the plateau of Le Murge, the Salentine Peninsula and the mountains, forests and beaches of the Gargano Promontory.

Piraeus (Athens), Greece
Piraeus, an MSC Mediterranean Cruises destination, has been the port of Athens since ancient times. It’s a city filled with incredible wonders including Mikrolimano Bay, Agia Triada (Church of the Holy Trinity), and the Archaeological Museum. Nowadays, Piraeus is a bustling centre with attractive waterfront cafés and restaurants, making it an ideal stop in the Mediterranean. Use it as a stepping stone to see the Acropolis and greater Athens. The majestic Parthenon stands proud among the remains of the ancient Acropolis, a citadel perched on a rocky cliff, rising 150-metres above the city of Athens. Don’t miss the opportunity to see this unique UNESCO World Heritage Site on an extraordinary MSC Cruises excursion. Begin with a climb to the top of Acropolis Hill to admire the magnificent Parthenon, the Temples of Athena Nike, and Erechtheion. Then, visit the modern Acropolis Museum with its outstanding display of archaeological finds, before heading to the Corinth Canal. After visiting the Parthenon, a UNESCO World Heritage Site, you’ll journey to Pláka, the historical quarter of Athens. Affectionately known as the ‘Neighbourhood of the Gods’, its maze of old streets is nestled around the northern and eastern foothills of the Acropolis. This MSC Cruises excursion will see you admiring a number of sites including archaeological remains and restored Neoclassical buildings. Immerse yourself in the area’s classical atmosphere before indulging in a spot of souvenir shopping. The Corinth Canal, an MSC Cruises excursion, is a narrow artificial waterway, completed in 1893. Separating the Peloponnese from the Greek mainland, the canal is a popular attraction and a grand engineering feat! A series of bridges connects the two sides of the canal, allowing for a railway line and roads to cross over. Starting with a coach ride through the bucolic Greek countryside, you’ll then enjoy a leisurely boat cruise down the canal.

Kotor, Montenegro
Kotor is a coastal town in Montenegro. It is located in a most secluded part of Gulf of Kotor. Kotor is an old Mediterranean port and major tourist destination. It has one of the best preserved medieval old towns in the Adriatic, listed with UNESCO world heritage sites. This small medieval town on the beautiful Kotor Bay is both charming and seductive. Narrow streets, contiguous houses, bulwarks, churches, cathedrals, squares, carnivals and feasts, create an environment that one cannot resist. Kotor has numerous other sights, such as Cathedral of Saint Tryphon in the old town (built in 1166), and ancient walls which stretch 4,5 km directly above the city. Sveti Đorđe and Gospa od Škrpijela islets off the coast of Perast are also among more popular destinations in Kotor vicinity.

Venice, Italy
The city of Venice sits at the top of the Adriatic Sea in the north east corner of Italy. It is considered by many to be one of the most beautiful cities in the world. The city sits on 118 small islands in the Venetian Lagoon – a salt marsh. In the 12th century Venice became a city state and its location at the top of the Adriatic made it a key naval and commercial centre as well as a flourishing art centre. Modern Venice is stunning and retains the wonderful history of this unique city. It is a city of museums, galleries, piazzas, palaces, churches and more. One visit isn’t enough to see all that Venice has to offer but visitors should try and see the Basilica San Marco and San Marco Square, the Doges Palace and the Gallerie dell'Accademia which houses some of Italy’s finest art treasures. 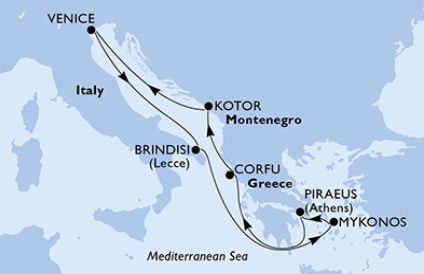