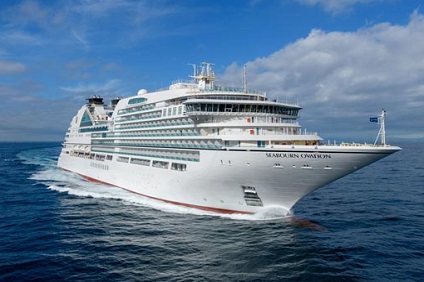 7 Night Cruise sailing from Haifa to Athens onboard Seabourn Ovation.

7 Night Cruise sailing from Haifa to Athens onboard Seabourn Ovation.

Re-Defining Ultra-Luxury Cruising...Again. As Seabourn celebrates 30 years of enriching and enhancing ultra-luxury cruising, we’re proud to introduce the next stage of our evolution. We welcome Seabourn Ovation, sister ship to the already renowned Seabourn Encore. Her arrival has crowned a fleet that is already the newest, most modern and most acclaimed at sea and will deliver a wealth of new concepts, a fresh design vision and a host of illuminating ideas to delight the world’s most discerning travelers.

As with Seabourn Encore and Seabourn Ovation, Seabourn enlisted the participation of master designer Adam D. Tihany. Recognized as one of the preeminent designers in the world, Tihany specializes in developing elegantly individual spaces for the most highly rated restaurants, hotels, resorts and spas in the hospitality industry. He is also renowned for his unique ability to realize and embody the particular personalities of his clients and the preferences of their clientele in his designs.

Haifa (Tel Aviv), Israel
Situated on the slopes of Mount Carmel, along one of the most beautiful bays on the Mediterranean coast, Haifa is Israel's primary port. It also serves as an important gateway to the biblical and historical sites of this sacred land. Although the origin of Haifa is obscure, its name appears for the first time in the 3rd century A.D. in Talmudic literature. Over the years, Crusaders, Arabs, Turks and the British occupied the city. Today, this bustling city possesses the nation's largest industries, several important museums and the respected Haifa Technical Institute. It is also the world center of the Baha'i faith, symbolized by a beautiful gold-domed shrine.

Ashdod (Jerusalem), Israel
The largest port in Israel, Ashdod is a gateway to Jerusalem, the 5,000-year-old walled city that is considered sacred to more than a third of the people on Earth. Numerous sites exist nearby, including the Jewish sacred Western Wall, and the Church of the Holy Sepulchre said to be the site of Calvary and to contain a piece of the true cross. Meander along the seaside promenade, or dip your toes in the Dead Sea waters, long known for their health benefits. Visit the Bar-Gera Museum to view a collection of art by artists who were either banned or persecuted by the Nazis and other fascist governments. The Yad Vashem Memorial Museum is dedicated to the six million Jews who lost their lives during the Holocaust.

Rhodes, Greece
Best known of the Dodecanese Islands, Rhodes is a fascinating architectural patchwork of her past. Here the legacy of the ancient Greeks mingles with that of besieging Turks, crusading knights, and occupying Italians. Twin bronze deer, the symbol of Rhodes, guard the Mandraki Harbor where the 100-foot Colossus is said to have stood, a wonder of the ancient world. The medieval Crusader City is dominated by the Palace of the Grand Masters, while cobbled streets lead to the bustling bazaar and a lively harbor that is a center of the international yachting scene.

Bodrum, Turkey
Today Bodrum is a picturesque yacht harbor filled with traditional wood-varnished sailboats, charming outdoor cafes and streets bursting with small shops selling carpets, leatherwear, jewelry and local artwork. In antiquity, it was the site of ancient Halicarnassus. Under King Mausolus, the city prospered, and in death, the king left the city its most enduring legacy, his majestic tomb, from which we derive the term "mausoleum." Only its massive foundations remain today but it was the largest tomb ever built by the Greeks and one of the Seven Wonders of the Ancient World. Models on the site recreate its form for visitors. Alexander the Great attacked the city in 334 BC, leveling all but the Mausoleum, which was later destroyed by an earthquake. When the Knights of St. John lost their castle in Smyrna in 1402, they came here. Finding the mausoleum in ruins, they used the stone to construct the Castle of St. Peter, which proudly stood sentinel to the city. Together with their fortifications on Kos and Rhodes, the Knights dominated the southeastern Aegean, running a hospital for passing pilgrims and ruling the seas as privateers in swift vessels. They remained until 1523, when Ottoman ruler, Suleyman the Magnificent, conquered Rhodes and the Knights' position became untenable. The castle still dominates the harbor and houses an archeological museum.

Cesme, Turkey
A popular holiday and resort destination, Cesme is located on a promontory on the tip of a peninsula that carries the same name. The town itself is dominated by the medieval Cesme Castle, while the back streets invite a casual stroll with their old Ottoman and Greek houses that charm passers-by. South of the castle there is an Ottoman caravanserai built in 1528 that has since been transformed into a lovely boutique hotel, and check the Greek Orthodox church of Ayios Haralambos to see the current art exhibition. Along with the historical attractions, visitors will enjoy local pleasures, such as a dip in the thermal baths followed by the culinary delights of native fruits, artisan cheeses and local wines.

Patmos, Greece
Deserted for centuries because of constant raids by pirates and the Turks, this tiny arid island was first settled in 1088 when the Emperor of Constantinople made it a gift to the monk Christodoulos Latrnos so that he could establish a monastery in honor of St. John the Divine on the site. Patmos has been a place of scholarship and religious enlightenment ever since. Today this modern pilgrimage site is a quiet respite from the tourist havens many other Greek isles have become.

Piraeus (Athens), Greece
Piraeus has been the port for Athens since 482 BC. The busy harbor is filled with ferries and cruise ships making their way to the Greek Islands and other Mediterranean cities. The busy metropolis of Athens and its treasure trove of antiquities lie just a few miles from the port. Even as the reality of the modern city took hold, with its high-rise apartments, crowded sidewalks and bustling traffic, the beauty of the Acropolis, the outstanding museums, charming cafés, sidewalk markets and startling views come together in a cultural mosaic for all to enjoy. 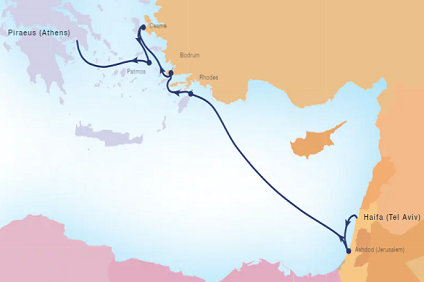