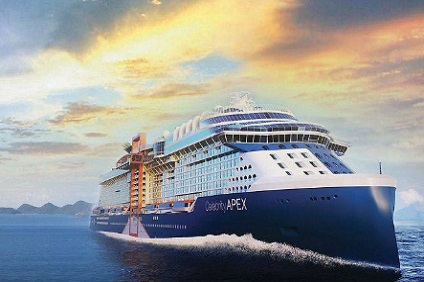 Celebrity ApexSM is the second ship in our highly anticipated Edge® series. With an innovative outward-facing design and visionary spaces that stand apart from anything else at sea (with the exception of her equally stunning sister, Celebrity Edge®, of course), Celebrity ApexSM will revolutionize the way you experience the world. Discover the unparalleled luxury of The Retreat, exclusively for all suite guests. Unwind in transformational accommodations that blur the boundaries between indoor and outdoor living. Soar above the sea on the Magic Carpet. Surrender to the carefree pleasures of the Rooftop Garden. And embark on a culinary journey through an unrivaled collection of restaurants, bars, and lounges. Celebrity Apex will sail the sparkling Mediterranean from Southampton, beginning in April 2020, and the sun-soaked Caribbean from Ft. Lauderdale, beginning in November 2020.

Barcelona, Spain
Formerly a sleepy Spanish city, Barcelona has recently been reborn as an eclectic fusion of the modern and medieval. This coastal city exudes European charm and welcomes multitudes of travelers every year. It’s a major destination with must-see architectural gems that date back some 2,000 years. You’ll encounter fascinating examples from the Roman Empire, the Middle Ages, the Modern masters like Gaudî, and many Cataluñian greats. Outstanding art museums can be found throughout the city, proudly displaying the works of world-renowned artists and countrymen, including Goya, Pablo Picasso, Salvador Dalî, and Joan Miró. For a respite from the hustle and bustle of the city center, venture to the awaiting Mediterranean Sea and all the seaside has to offer. Maybe a brisk hike in the nearby forest covered Collserola Hills or the hilltop in Montjuïc with its botanical gardens is the perfect recharge for a rollicking evening in one of the premier party capitals of the world. Round out your cruise to Barcelona dining at a tapas bar and savor a variety of delicious small dishes to share—from traditional Spanish to the more innovative.

Santorini, Greece
Here on the island of Santorini, you’ll find a classic Greek seascape—whitewashed houses accented by sea-blue roofs. This is a treasure trove for both professional and amateur archeology buffs, with sites that include tombs that date back to the 9th century and the sanctuary of Apollo. In many ways, Santorini could be considered an explosive place, being that its terraced collection of homes and windmills lie on a caldera-- a huge basin formed by an erupting volcano. The island’s volcanic past has also produced delicious grapes for excellent wines that are well worth investigating while on your Santorini cruise. Some of the best on the island can be found in Pyrgos, Megalochori, and Oia. Oia’s hilltop not only has the ancient, Minoan site of Akrotiri, but is quite possibly the best vantage point from which to witness the spectacular sunsets. And, if you have some time, take a short trip to the island of Nea Kameni for a dip in its famous hot springs. The warm dark waters are enriched with iron and manganese and considered therapeutic.

Rhodes, Greece
Rhodes, the friendliest city in the Mediterranean, is situated at the island’s northernmost point. This sunny retreat is also home to many historic sites, such as the ruins of the Temple of Venus and the medieval Street of Knights. Rhodes, pronounced ro-dos, is the largest of the Dodecanese Islands. The varied landscape with beaches, wooded areas, and ancient ruins also make this one of the most alluring of the Greek archipelago. A cruise to Rhodes wouldn’t be complete without exploring the picturesque Old Town with its winding streets and Byzantine legacy. Enter the gateways of Rhodes and step back to a time when the Knights of St. John of Jerusalem built a Christendom stronghold. Or, tour the restored Palace of the Grand Masters and the Hospital of the Knights. You can spend the day amid the chronicles of Greek history. Immerse yourself in the whitewashed romance of the archaeological site, Lindos and climb to the ruins of its ancient Acropolis for sweeping views of the village and the blue seas beyond. The island’s vibrant shops, great restaurants, and glittering clubs buzz with a happy, modern energy in contrast to the grace of its ancient history.

Ephesus (Kusadasi), Turkey
Once the capital of the Roman province of Asia Minor, this coastal town is now an archeologist’s dream. The UNESCO World Heritage ruins of Ephesus impress even those familiar with the world's other ancient cities. Though excavations have been underway for 150 years, only 20 percent of the city has been uncovered. This former Greek banking and trading center is rich with historic sites, including the Great Theater, the Temple of Hadrian, and the Temple of Artemis, one of the Seven Wonders of the Ancient World. On your Europe cruise, check out the the Celsus Library — built in 117 A.D.— made up of towering columns highlighted by the statue of the goddess of wisdom.

Mykonos, Greece
Mykonos is known for its whitewashed villages sprinkled with blue and jade green. It's also famous for its sophisticated nightlife. The most popular island in the Cyclades is bustling with activity, awash in beautiful alleyways, and home to alluring sandy beaches.

Athens, Greece
Athens brought the world drama, history, poetry, and philosophy. Once home to the world's most powerful and civilized empires, Athens is now the world's foremost archaeological playground. The towering columns of the Parthenon still stand in homage to the virgin goddess Athena. The Parthenon sits atop the Athenian Acropolis and watches over the city where it can be seen from just about anywhere in Athens. Make it a point to visit the incredible Acropolis Museum on your cruise to Athens. The joint effort between two architects, one American and the other Greek, this outstanding building was completed and opened to the public in 2009. It focuses primarily on the Greek period dating to 5 B.C., considered to be the apex of art, culture, and philosophy in ancient Greece, but it also has artifacts from the Bronze, Roman, and Byzantine Ages. There’s even a Plexiglas walkway from which an excavated section of an old Athenian neighborhood can be viewed. In addition to an abundance of historical riches, modern Athens has plenty on offer—from scenic beaches to restaurants with superb Mediterranean cuisine and bustling central markets.

Valetta, Malta
In addition to a number of significant works of art, this town is known for the many fortifications built by the Knights of Malta, who for years helped care for European pilgrims and crusaders en route to and from the Holy Land. The walled city of Valletta was founded in 1565 by the Knights of St. John and it remains a masterfully preserved medieval treasure. From the glittering baroque interior of the Co-Cathedral of St. John to the charm found wandering the old cobbled avenues, it’s no wonder this tiny city has earned World Heritage status. Hidden among the foreboding fortresses and decorative masterpieces is a city with growing appreciation for contemporary design, exciting, culinary offerings, and burgeoning nightlife scene.Maltese cuisine is a fusion of Mediterranean dishes and influences with touches of French and Sicilian. Fresh seafood and the Maltese wines from the distinguished local vineyards are always on the menu. Stroll along the cobblestone streets of Mdina to see its medieval churches, cathedrals, and palaces. Experience two Maltese treasures: The Blue Grotto and Marsaxlokk village. Or, set off on a Maltese sightseeing adventure beginning at Valleta’s Upper Barrakka Gardens. It’s a wonderfully small capital that’s bursting with stories. Valleta is a place you’re sure to create a few stories of your own on your Valletta cruise.