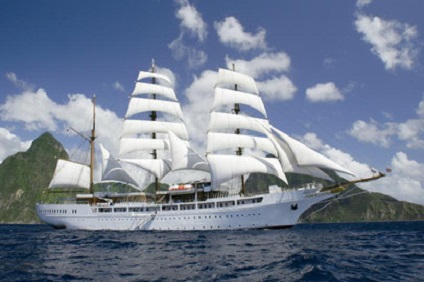 In February 2001 the SEA CLOUD II turned fantasy into reality:
In the harbor of Las Palmas, godmother Sabine Christiansen broke a bottle of champagne across the bow of the gleaming white barque and proclaimed: “I christen you the ‘SEA CLOUD II’”.

Like no other ship, she combines the timeless elegance of windjammers of past with the highest safety standards and the luxurious comfort of modern cruise ships.

Sailing romantics will be fascinated while on board, where the 29,600 sq. feet of sails is set by hand..

What makes the SEA CLOUD II special is her unusual bounty and expanse for a sailing ship. You have almost limitless possibilities on the four decks to do exactly as your heart desires.

Las Palmas/Gran Canaria
With its black volcano almost 2,000 metres (6,561 foot) high and endless white beaches along the coastline, the island of Gran Canaria displays a huge variety of landscapes. A "continent in miniature" with rugged rock formations, dense pine forests, dry valleys and reservoirs in the interior, lush vegetation in the north, shimmering dune landscapes in the south and weirdly shaped cliffs in the west. Almost half the island has been registered by UNESCO as a Biosphere Reserve. The capital, Las Palmas, is no less colourful, with its port and history stretching back 500 years. The showpiece of this historic old town is the magnificent Santa Ana Cathedral.

Santa Cruz/Tenerife
Even from afar you can see the impressive panorama with Tenerife's landmark, Mount Teide. Its peak is the highest in Spain at 3,718 metres (12,200 foot) and is often covered in snow. The Las Cañadas National Park, a UNESCO World Heritage Site, is a high volcanic plateau at the foot of Teide, surrounded by a circle of rock that rises up steeply. Volcanic activity has created strange-looking rock formations here which are adorned with a huge range of colours and seem like a unique synthesis of nature's art. In contrast to this are the fertile valleys of the north, a barren, almost desert-like south and the island's vibrant capital city, Santa Cruz.