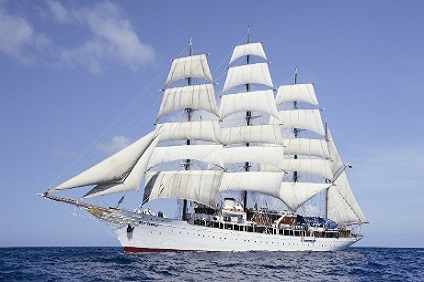 The SEA CLOUD’s life story is more thrilling than some novels. She was built in 1931 in Kiel at the request of a Wall Street broker. It was his wife, Lady Marjorie Post, who shaped the SEA CLOUD’s character.

After the ship’s sale in 1955, there were several dark chapters in the history of the once glamorous private yacht – until she was bought in 1978 by a group of Hamburg-based shipowners and businessmen and given a new life.

The SEA CLOUD is truly a queen of the seas. Since her construction as a private yacht in 1931, her elegant appearance and magnificent interior have inspired awe.

Today the four-masted barque is at home on the world’s oceans as a cruise ship extraordinaire. Those who have sailed with her in the Mediterranean, the Caribbean, or perhaps across the Atlantic, return to her again and again.

Her special charm is simply irresistible !

Highlights of this cruise include:

Las Palmas/Gran Canaria
With its black volcano almost 2,000 metres (6,561 foot) high and endless white beaches along the coastline, the island of Gran Canaria displays a huge variety of landscapes. A "continent in miniature" with rugged rock formations, dense pine forests, dry valleys and reservoirs in the interior, lush vegetation in the north, shimmering dune landscapes in the south and weirdly shaped cliffs in the west. Almost half the island has been registered by UNESCO as a Biosphere Reserve. The capital, Las Palmas, is no less colourful, with its port and history stretching back 500 years. The showpiece of this historic old town is the magnificent Santa Ana Cathedral.

Philipsburg
St. Maarten is one of the most rewarding stops for a cruise-ship passenger. The island is divided between French St. Martin in the north and Dutch St. Maarten in the south. Each side manages to retain its own distinct flavor. The Dutch side (Sint Maarten) is a lively destination of white sand beaches, casinos, historical sites, shopping venues and lot of nightlife. Most ships dock in Philipsburg, the capital of Dutch St. Maarten.

Philipsburg fills a narrow stretch of land between Great Bay and the Great Salt Pond. Two main roads cut across the length of Philipsburg--Front Street and Back Street. Front Street, the main thoroughfare, is lined with duty-free shops offering everything from Italian leather goods and Japanese cameras to native crafts. Narrow alleyways lead in either direction to arcades and courtyards filled with flowers. Visitors will also find examples of traditional West Indian architecture, including characteristic pastel-colored houses with second-story verandas looking out over the street. Front Street's most prominent landmark is the Courthouse, built in 1793. A grand white wooden structure topped with a cupola, it now serves as St. Maarten's courthouse. Also on Front Street is the Simartin Museum, which gives visitors an excellent introduction to local history.