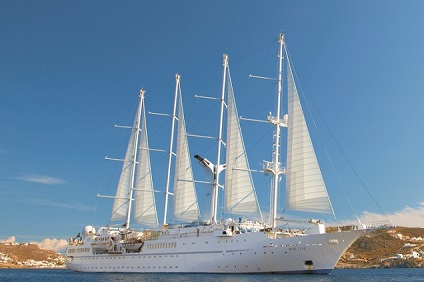 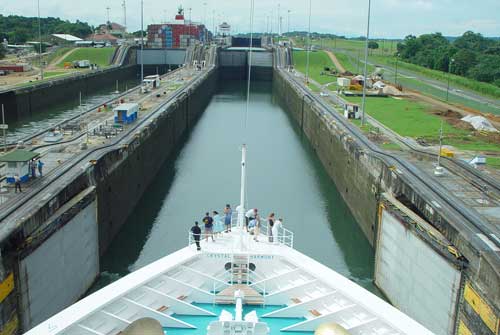 Venture into lush and pristine rainforests and explore forgotten relics of the Spanish Empire during this 15-day cruise from Costa Rica to the Bahamas. Ride horseback to a mountain summit surrounded by an extensive Costa Rican rainforest near Quepos. Glide your kayak past twisted mangrove roots as you seek out curious bottle-nosed porpoises in an estuary near Puerto Jimenez in Costa Rica. Watch shipping traffic and learn about deadly diseases and the daunting construction challenges confronting French and American engineers as you experience a guided daytime transit of the Panama Canal. Browse handcrafted wares and cluttered, colorful stalls amid the numerous shops nestled inside the imposing Las Bóvedas, a 200-year-old former Spanish dungeon renovated into a shopping arcade in Cartagena, Colombia. Kick back in a rustic bamboo raft during a guided tour of rural traditions and Jamaican living on the Rio Grande River near Port Antonia.

Puerto Caldera, Costa Rica
Absorb Costa Rica’s magnificent biodiversity by adding a land package to your cruise. Venture to the Monteverde Cloud Forest, where 300-year-old trees and orchids form a spectacular backdrop to resplendent quetzals, tapirs, monkeys, sloths, and other rainforest residents. Or to Tortuguero National Park, one of the most remote places in Costa Rica, known for being a primary nesting site of endangered green turtles.

Quepos, Costa Rica
This former banana-exporting town is your base camp for a day of rainforest adventure. Walk along trails that weave up to waterfalls or soar high above the jungle floor surrounded by wildlife. Then grab your camera for a walk through Manuel Antonio National Park, with its lovely beaches, easy trails, and exuberant animal life.

Isla Parida, Panama
Located within a Nature Preserve of 50 islands, and part of Chiriqui Marine National Park lovely Isla Parida boasts magnificent white-sand beaches, one of which is over 1,300 feet long. The crystal clear waters stay at 82 degrees year round and are filled with marine life. This island is close to some of the best big game fishing of marlin, sailfish, tuna and jacks in the world. There are numerous hardwood trees like teak, mahogany, and eucalyptus, and fruit trees like mango, banana and coconut trees. Wildlife here includes white-faced and howler monkeys, parrots and toucans. Here you will be treated to a delicious barbecue hosted by Windstar on a secluded beach that faces the Pacific Ocean.

Balboa / Fuerte Amador, Panama
One of the entrances to the Panama Canal on the Pacific side, Balboa/Fuerte Amador was founded in 1519 and is a short distance from Panama City.  In 2012 Balboa was ranked #1 in Latin America in the category of world's busiest container ports. Sightseeing highlights include the colonial homes, the Administration Building, the Goethais Memorial, the Prado, and the local handicraft markets of traditional Panamanian crafts.

Panama Canal
At nearly 51 miles long and connecting two oceans with a vast “highway of water,” the Panama Canal easily earns its reputation as the Eighth Wonder of the World. Experience a once-in-a-lifetime thrill as your ship is raised, then lowered 85 feet to sail gracefully through three massive locks that transport you from the calm Pacific Ocean to the shimmering waters of the Atlantic.

Colón, Panama
Untouched beaches, lowland rainforests, and elaborate colonial architecture lie just beyond the commercial center of Colón. There are plenty of things here to satisfy virtually every interest — from snorkeling in impossibly blue Caribbean waters to sunbathing on gold-sand beaches, exploring ancient ruins, or admiring the massive locks on the other side of the formidable Panama Canal.

Cartagena, Colombia
Welcome to the sparkling city of Cartagena, where the gold and jewels of the Spanish Main awaited shipment across the Atlantic. No pirate could resist, nor will you be able to when you visit this historic city. The Old Town, a UNESCO World Heritage Site, is surrounded by 400-year-old walls and contains a plethora of churches, fortresses, and restored colonial mansions. Outside the walls are more treasures: Climb the massive Castillo de San Felipe to investigate its maze of hidden tunnels, or shop for the perfect emerald.

Nassau, Bahamas
The capital city of the Bahamas is known for its beautiful beaches, offshore coral reefs, and excellent diving and snorkeling. Climb the 66 steps that connect Fort Fincastle to downtown Nassau and see the 600-foot-tall Queen’s Staircase carved out of solid limestone. Or find the John Watling’s Distillery of barrel-aged rums before strolling the Straw Market full of all types of island-themed souvenirs.