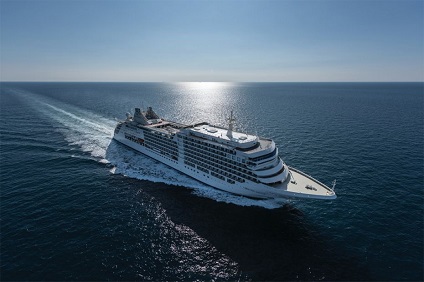 7 Night Cruise sailing from Barcelona to Lisbon aboard Silver Moon.

7 Night Cruise sailing from Barcelona to Lisbon aboard Silver Moon.

Viva Espagna! Cartagena, Malaga, Mallorca … this journey reads like a who’s who of Iberia. And every facet of Spain’s multiple personalities come alive with each destination. Be tempted by tapas in Barcelona’s culture, enjoy Palma’s oozing glamour, Valencia’s futurism, even Cadiz’s Moorish charm. And yet the country just keeps on giving. Once you have been satiated by Spain, an overnight in lovely Lisbon is waiting for you.

Barcelona
The infinite variety of street life, the nooks and crannies of the medieval Barri Gòtic, the ceramic tile and stained glass of Art Nouveau facades, the art and music, the throb of street life, the food (ah, the food!)—one way or another, Barcelona will find a way to get your full attention. The capital of Catalonia is a banquet for the senses, with its beguiling mix of ancient and modern architecture, tempting cafés and markets, and sun-drenched Mediterranean beaches. A stroll along La Rambla and through waterfront Barceloneta, as well as a tour of Gaudí's majestic Sagrada Famíliaand his other unique creations, are part of a visit to Spain's second-largest city. Modern art museums and chic shops call for attention, too. Barcelona's vibe stays lively well into the night, when you can linger over regional wine and cuisine at buzzing tapas bars.

Valencia
Valencia is a proud city. During the Civil War, it was the last seat of the Republican Loyalist government (1935–36), holding out against Franco’s National forces until the country fell to 40 years of dictatorship. Today it represents the essence of contemporary Spain—daring design and architecture along with experimental cuisine—but remains deeply conservative and proud of its traditions. Though it faces the Mediterranean, Valencia's history and geography have been defined most significantly by the River Turia and the fertile floodplain (huerta) that surrounds it. The city has been fiercely contested ever since it was founded by the Greeks. El Cid captured Valencia from the Moors in 1094 and won his strangest victory here in 1099: he died in the battle, but his corpse was strapped into his saddle and so frightened the besieging Moors that it caused their complete defeat. In 1102 his widow, Jimena, was forced to return the city to Moorish rule; Jaume I finally drove them out in 1238. Modern Valencia was best known for its frequent disastrous floods until the River Turia was diverted to the south in the late 1950s. Since then the city has been on a steady course of urban beautification. The lovely bridges that once spanned the Turia look equally graceful spanning a wandering municipal park, and the spectacularly futuristic Ciutat de les Arts i les Ciències (City of Arts and Sciences), most of it designed by Valencia-born architect Santiago Calatrava, has at last created an exciting architectural link between this river town and the Mediterranean. If you're in Valencia, an excursion to Albufera Nature Park is a worthwhile day trip.

Cadiz
More than a hundred watchtowers gaze out across the waves surrounding this ancient Andalusian city. Sprinkled with evocative cobbled side streets, you’ll explore 3,000 years’ worth of history, while stumbling across palm-tree lined plazas of shaded coffee sippers. Cadiz claims the mantle of Western Europe’s oldest city, and every piece of architecture - and every wrong turn - offers a chance to discover fascinating new tales. Founded by the Phoenicians in 1100BC, Christopher Columbus used the city as a base for his exploratory, map-defining voyages of 1493 and 1502. The port grew in importance and wealth as Cadiz’s strategic location close to Africa’s northern tip helped it blossom into a centre for New World trade. Catedral de Cádiz, is a display of the city’s wealth and importance, looming spectacularly over the Atlantic’s waves, with cawing seagulls sweeping between its twin bell towers. Inside, treasures from the city’s trading exploits in the West Indies and beyond - which helped fuel the growth of this historically prosperous city – are on display. Enveloped by ocean on almost every side, Cadiz has something of an island feel, and you can cool off from southern Spain’s unrelenting sunshine on the sweeping golden sand beach of Playa Victoria. The two towers of the new El Puente de la Constitución de 1812 mark a contemporary landmark in this most ancient of cities, in the form of a spectacular new road bridge. Torre Tavira, meanwhile, is the most famous of Cadiz’s army of watchtowers, and the highest point in the city. Reach the top for a view of the ocean fringing the city’s expanse, and to learn about the towers - constructed so trading merchants could survey the harbour from their lavish homes. The Central Market is a chaotic place of bartering, where flashing knives dissect fresh fish. Stop in at the orbiting bars to enjoy tapas, freshly prepared with the market’s produce.

Lisbon
A glorious mosaic of beauty, freedom and authenticity, Portugal’s capital is a stirring artwork of a city. Known for the seven hills it spreads across, and its stirring fado music, Lisbon is a pastel-coloured blend of houses and beautiful tile artworks - and this creative city strikes a perfect harmony between natural and manmade beauty. Stroll along Alfama's steep, cobbled streets as you explore one of the city’s oldest neighbourhoods - where each house and door could be its own photograph. Look for the decorative tiles, with the distinctive blues and whites of Azulejo ceramics, and visit the dedicated museum to learn more. Afterwards, wind up to São Jorge Castle, where views out across Lisbon’s red rooftops unravel. Just one of many majestic viewpoints, you can also seek out Miradouro da Graça for perhaps Lisbon's finest panorama, with the copper-coloured suspension bridge stretching over sparkling water beyond the sea of buildings. The elegant Tower of Belém rises in the Tagus estuary and is a historic defender of these shores. The grand, carved cloisters of Jerónimos Monastery spread out close by, and there's another UNESCO recognised location close by at Sintra, where a colourful town is set amid thick gardens and towering mountains - capped by the royal Pena Palace. Later, relax and take a quick break to drink Ginjinha, a cherry liqueur made from chocolate cups instead of coffee. Lisboetas have a sweet tooth, and the famous Pastel de Nata's crumbling pastry and caramelised-custard topping is the essential accompaniment to any coffee stop.