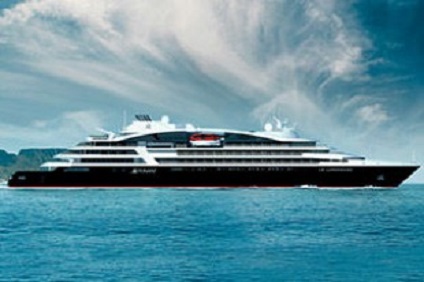 9 Night cruise departing from Dunedin to Auckland onboard Le Bellot.

9 Night cruise departing from Dunedin to Auckland onboard Le Bellot.

On this cruise, PONANT invites you to discover New Zealand, a unique destination with a multitude of natural treasures.

Set sail aboard Le Bellot for a 10-day cruise from Dunedin to Auckland.

You will first discover Dunedin. The Edinburgh of New Zealand is a lively student city, with a rich Scottish Heritage.

The Banks Peninsula will reveal wonderful landscapes of lush hills and rugged coasts during your calls in the bays of Lyttleton and Akaroa, two ancient flooded volcano craters.

In Picton, you will discover the Marlborough region, famous for its vineyards and its submerged valleys.

You will also sail to Wellington, the capital of New Zealand. This ancient site of the Maori people, as demonstrated by the Te Papa Tongarewa Museum, perfectly combines local traditions and bustling nightlife.

Le Bellot will then call at White Island, a volcanic island with an unreal atmosphere, between lunar landscapes and steam emanating from the numerous fumaroles.

Before disembarking in Auckland, you will be able to explore the many treasures of Tauranga: volcanoes, hot springs, geysers, rivers and gorges, and lakes that range in colour from deep blue to orange-tinged.

Surrounded by the blue waters of the Pacific, the twin islands of New Zealand are the promise of an incredible mosaic of contrasting panoramas.

Dunedin
Dunedin is New Zealand's oldest city and is often referred to as the Edinburgh of New Zealand. This city of the south, wears its Scottish heritage with pride. The city contains some of the best preserved Victorian and Edwardian architecture in the Southern Hemisphere. The picturesque Silverpeaks hinterland to the North West provides a picturesque backdrop and The Otago Peninsula, which lies within the city boundaries, has internationally renowned wildlife reserves, including the only mainland breeding colony of Northern Royal Albatross.

Akaroa
Set on the east coast of South Island, Christchurch is New Zealandﾒs second-biggest city. You can soak up its easy-going atmosphere in one of the many parks and gardens that give Christchurch its nickname ﾓthe garden cityﾔ, or dally a while in Cathedral Square to see how the city is transforming itself after the earthquakes of 2010 and 2011. Attractions such as the International Antarctic Centre and Christchurch Gondola ride are as popular as ever, while pop-up cafes, the Cardboard Cathedral and community art projects showcase the citizensﾒ resilience. The beautiful port of Akaroa, where ships dock, is about 90 minutesﾒ drive from Christchurch on the Banks Peninsula

Picton
A must-see entry point to South Island, Picton is a little coastal town girded by gentle hills, located on the south side of the Queen Charlotte inlet. The cafés and restaurants which border the charming waterfront give a very lovely view of the fjord. You can also decide to get some height above sea level, and walk in the surrounding areas. However, Picton is above all an opportunity to explore the unique Marlborough fjords. This interweave of submerged valleys, making numerous different navigable routes, are among the most beautiful natural wonders of New Zealand.

Wellington
Crowned with gentle green hills, Wellington harbour is located in the far south of North Island. This city offers a charming pell-mell of traditional and modern cultures, bestowing on the New Zealand capital, a unique atmosphere, at once friendly and avant-guard. Where some sites, like the large National Te Papa Tongarewa museum, reflect the city’s Maori past, others, like the many cafés and restaurants, affirm the inhabitants’ incredible lust for life.

Napier
On the east coast of North Island, south of Hawke’s Bay, you’ll find Napier. Mostly destroyed by an earthquake in 1931, reviving from its ashes in less than two years, it grew into a magnificent Art Deco style city, very in-vogue at the time. With its pure lines mixed with traditional Maori designs, the singular New Zealand character of this city will intrigue you. You’ll discover all this extraordinary architectural heritage as you take a stroll the city. Wine lovers will be able to taste some of the best wines from the region, which is famous for its vineyards.

White Island
Located in the Bay of Plenty, White Island is an active volcano which has been built up by continuous volcanic activity over the past 150,000 years. It is possible to walk inside the main crater and experience nature's immense power, as gas and steam burst up from far below the Earth's crust. The smell of sulphur and the noise of steam emanating from the many fumaroles makes for an amazing sensory experience. The island has also been identified as an important bird area because of its breeding colony of Australasian Gannets. Depending on the level of volcanic activity and sea state, guests will have the opportunity to land on White Island and take a guided walking tour through the crater and around the ruins of the old sulphur mine.

Tauranga
Located to the north of Rotorua, Tauranga stretches the length of the Bay of Plenty, sheltered from the ocean by the island of Matakana. This coastal city boasts a flourishing economy thanks to its port, and is a pleasant and pretty town with a peaceful, relaxed feel. The seafront area is contemporary and lively, dotted with cafés and restaurants. The town centre reveals more picturesque charms, while the surrounding area is packed full of natural delights. Travel on to the town of Rotorua to visit the Wai-O-Tapu Thermal Wonderland: a fantastic opportunity to experience an absolutely exceptional geothermal phenomenon.

Auckland
Auckland is New Zealand’s largest, most populated and busiest city. Located on an isthmus linking the peninsula of Northland to the expansive North Island, it seems to float between land and sea. It is one of the few cities in the world to have two separate harbours : Manukau Harbour on the Tasman Sea and Waitemata Harbour on the Pacific Ocean. You will understand why Auckland is known as the city of sails when you see the forest of masts in the marina. The 328 metre-high Sky Tower offers splendid views of the city. Surrounded by dormant volcanoes such as Mt Eden, Auckland is noted for its abundant nature and magnificent black-sand beaches. A blend of Maori, European and Asian cultures give the city a vibrant atmosphere.