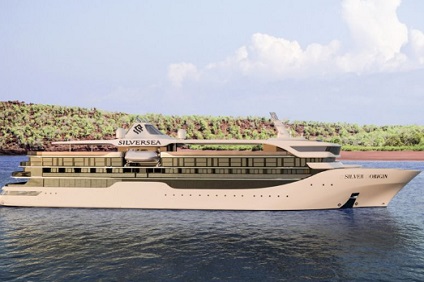 Much more than a destination, discover the islands’ heritage as a living museum for all humanity. Get to know the Galápagos’ inhabitants - from the red-footed, blue-footed and Nazca Boobies, to marine iguanas and sea lions - just a part of what you’ll experience on this voyage. Every corner of this central/northern itinerary will inspire you just as it inspired Charles Darwin almost two centuries ago.

Bahia Darwin, Genovesa
At Genovesa Island the ship tucks into Darwin Bay, an ancient volcanic crater now flooded by the sea. Zodiacs land on a picturesque sandy beach where Galapagos sea lions often rest on the fine, white sand. Explorations along the shore may reveal marine iguanas looking like prehistoric dinosaurs in miniature. By heading inland a short distance visitors could encounter seabirds of all shapes and sizes nesting in the vegetation. Scores of immature Red-footed Boobies perch on branches within an arm’s reach of the path. In addition, watch for Great Frigatebirds and Yellow-crowned Night Herons along the walk.

Bahia Sullivan, Santiago
The lava fields of Sullivan Bay on Santiago Island will inevitably remind visitors of the surface of the moon. As brilliant red Sally Lightfoot crabs scuttle along the black volcanic shores, learn about the formation of the islands through geological forces from your guides. The lava flows here are just over one hundred years old and date back to 1897. The lava took on a rope-like appearance and geologists have adopted a Hawaiian word, pahoehoe, as the technical name for this kind of volcanic rock. After walking the exposed rocky terrain, it is a welcoming sensation to return to the sandy beach and get ready for a swim or a snorkel.

Rabida
Rabida Island has received accolades for being one of the most exotic spots on earth and while it is small in size, the island is dramatic in scale. Rugged red cliffs rise from the sea and Zodiacs land onto a beach of dark red sand colored by iron ore. Ghost crabs and Galapagos sea lion pups often rest on the russet sands. Further inland, the rusty sand gives way to shrubby coastal vegetation dominated by prickly-pear cactus. Common Cactus Finches feed on the yellow flowers while Darwin finches and lava lizards skitter across the path in search of food.

Punta Suarez, Espanloa
Punta Suárez lies at the western point of Española, the oldest island in the Galápagos. Sheer cliffs provide superb thermals for seabirds and you may spot Swallow-tailed Gulls, Nazca Boobies and Blue-footed Boobies on the breeze. The largest seabird to nest in the Galapagos Islands is the Waved Albatross. These ocean wanderers can be seen seasonally here from April through December, when pairs reunite on Española, going through an elaborate pair-bonding display. Mockingbirds, doves, and occasional Galápagos Hawks can also be seen on the point, along with sea lions and colorful marine iguanas.