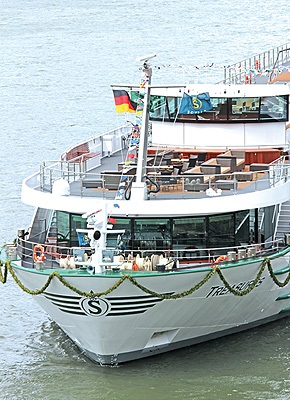 Our River Rhine cruise explores five countries from Switzerland to the Netherlands aboard ms Grace, ms Inspire or ms Treasures plus three nights in the historic Italian fashion capital of Milan and a visit to glamorous Lake Como.

Highlights include: Milan – three nights at Hotel Principe di Savoia, a historic landmark in the heart of the city; Lake Como – a private boat ride on Lake Como, a visit to Isola Comacina for lunch at a famed trattoria, and a visit to Bellagio. Basel or Zurich – your choice of Swiss city walking tours in either Old Town Basel, a cultural mecca, or fashionable lakeside Zurich. Riquewihr – a walking tour of this tiny Alsatian wine village where French and German cultures blend; featured on the list of “The Most Beautiful Villages in France.” Heidelberg – Germany's original university town, including a guided visit to legendary Heidelberg Castle. Wiesbaden – discovering a city that's grown around one of Europe's oldest spa towns. Linz am Rhein – a picturesque town lined with colorful half-timbered houses. Dusseldorf – spend an afternoon exploring this riverside center of art and fashion. Amsterdam – lunch aboard a private canal boat cruise. Tauck Exclusive experiences include a special evening at Schloss Biebrich, a restored Baroque palace on the bank of the Rhine in Wiesbaden.


Amsterdam
Amsterdam, the capital of The Netherlands is built around a concentric network of canals spanned by over 1000 bridges making canal cruises one of the most attractive ways of viewing the city. Many of the houses date back to the 17th century. These narrow-fronted merchants' houses are characterised by the traditionally Dutch ornamented gables.

Dusseldorf
Dusseldorf is the capital city of the German state of North Rhine-Westphalia and centre of the Rhine-Ruhr metropolitan region. It is one of the economic centers of Western Germany and is located along the River Rhine in the densely populated Rhine-Ruhr metropolitan area. The city is famous for its nightlife, carnival, events, shopping and for fashion and trade fairs.

The city of Dusseldorf was largely destroyed in World War 2, and there are very few old buildings left. However the Old Town was rebuilt according to historic plans on its foundation walls, which make it look like a real historic town. Today the old town is a popular shopping mall and at night and weekends turns into the so-called “longest bar of the world”. Within one square kilometer, you will find about 260 bars, coffee shops and snug brewing houses. 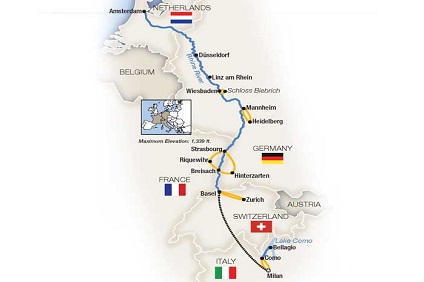