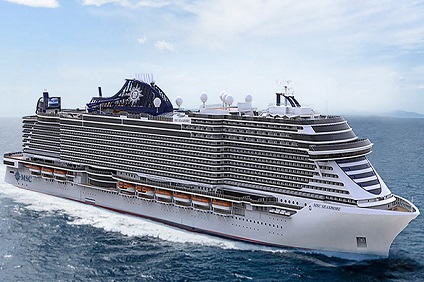 Same number of decks but new spaces and more powerful engines.
The innovative MSC for Me technology provides an enhanced onboard experience and the guests on board MSC Seashore will have the chance experience the world’s first digital cruise assistant, Zoe.

Genoa
Genoa is a city and a seaport in northern Italy, the capital of the Province of Genoa and of the region of Liguria.Famous as the birthplace of Christopher Columbus, Genoa remains a bustling seaport. The city's Renaissance heritage is preserved in splendid palaces overlooking the harbor.

The Old Quarter of Genoa, is especially enthralling for those who like to explore. It is best to travel on foot through the narrow streets (called carruggi) which are meticulously kept, as are the expansive palazzi (mansions) of medieval merchants which line them. Around the Palazzo Reale, many shops sell Turkish carpets and the best of silk.

Other attractions in Genoa include the Palazzo Ducale now used for exhibitions and concerts, the Via Garibaldi art gallery and the original waterfront or Porto Antico. The waterfront is also full of atmosphere and there are many bars and restaurants where one can watch the world go by. The 16th century lighthouse, the Lanterna, which rises over 120 meters (325 steps!) above the sea, can be seen 50 kilometers away, and has guided mariners to the port for 100s of years.

Barcelona
Barcelona is the second largest city in Spain and the capital of Catalonia. It is located on the shores of the Mediterranean and enjoys a mild climate all year round.Barcelona is one of Europe’s largest and most successful ports and one of the world’s leading cities in art and architecture.

From the modern cruise terminal at the docks you will need a taxi or tour to see the artistic beauty of this unique destination, credited to the talents of Joan Miro, Pablo Picasso, Antonio Gaudi, Jose Clara and others. Stroll the mosaic-paved Ramblas, the city's social hub, with open-air cafes, street entertainers and flower displays. See its unique Catalonian cultural heritage in the ancient Gothic Quarter, the surrealistic architecture of Antonio Gaudi and some outstanding museums.

Marseilles
Marseille is the second-largest city of France and forms the third-largest metropolitan area, (Paris and Lyon are larger). Located on the Mediterranean Sea, it is France's largest commercial port and the capital of the Provence-Alpes-Côte d'Azur région,

The Old Port or Vieux-Port is the main harbour and marina of the city. It is guarded by two massive forts (Fort St Nicolas and Fort Saint Jean) and is one the main places to eat in the city. Dozens of cafés line the waterfront. The Quai des Belges at the end of the harbour is the site of the daily fish market.