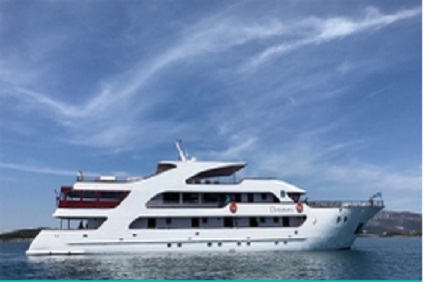 7 Night Cruise sailing from Dubrovnik to Split aboard one of Katarina Lines Premium Superior ships.

7 Night Cruise sailing from Dubrovnik to Split aboard one of Katarina Lines Premium Superior ships.

Saturday DUBROVNIK - ŠIPAN or SLANO (L)
Departure from Dubrovnik harbor Gruz at 13:00h, lunch is served during a cruise along the Dalmatian coast down to the one of the Elaphite islands - Šipan, or small village Slano on the mainland. Both are peaceful fishermen's villages where you can experience the fantastic sunset. Overnight in the port.

Sunday ŠIPAN or SLANO - MLJET - KORČULA (B,L)
After breakfast we continue our journey towards the island and national park Mljet. Lunch on board. Free time to enjoy the salt lakes in the National Park and enjoy the sun and sea on this tranquil island. The large lake is inside the National park, and in the middle one can visit an old abbey and church, or just use a canoe to roam around lakes in the National park. Bicycles can also be hired to cycle around the paths surrounding the lakes. We continue to the island of Korčula where we arrive in late afternoon. Join our guided tour of Korčula (included on Premium Superior). Surrounded by ancient walls and fortified bastions Korčula’s old town is very well preserved with its layout and structure dating back to 13th century. Overnight in port.

Monday KORČULA - VIS (B,L)
Early in the morning we cruise towards the little Biševo island to visit the Blue cave, a magnificent natural phenomenon. As sometimes weather conditions can be very unpredictable, the possibility of our visit will depend on those conditions, however you will be notified of this by the crew. Entrance to Blue Cave is to be paid on the spot (approx. EUR 14.- per person). We continue towards the island of Vis, which has unique geographical position and was once a strategic harbour for the Yugoslav navy – it was closed to the public until recently. Because of this very isolation, Vis retained a special charm of ‘the Mediterranean as it once was’ which makes it really interesting to see. Overnight in the town of Vis, situated on the northern side of the island, developed near the remains of ancient Issa, the first urban centre in Croatia. If interested, visit the remains of the Roman thermal place, City museum or simply take a walk enjoying the views of the beautiful villae rusticae situated along the waterfront. For those wandering to see more – rent a car or scooter and explore this wonderful island on you own.

Tuesdey VIS - HVAR (B,L)
Our next destination is the tiny island of Šćedro near the island of Hvar where we have time to relax and refresh in the clean, crystal blue sea. Departure for Hvar after lunch followed by optional guided tour (included on Premium Superior). Hvar is the longest island in the Adriatic. Here there is the magnificent, Renaissance cathedral with its original tower; also the oldest community theatre in Europe which was founded here in 1612. Hvar Town offers plenty of restaurants, bars cafes and clubs, open long into the night. Hvar is often referred to as the sunshine and jet-set island.

Wednesday HVAR - BOL - MAKARSKA (B,L)
Leave Hvar and continue our cruise towards the island of Brač, more precisely to the town of Bol, best known for its famous Zlatni rat beach (Golden horn), a natural phenomenon that with its specific form dominates the other beaches of Croatia. Directional winds and waves cause the shape of the beach to often change. After the swimming break or short walk around the village we continue towards Makarska with it's Mediterranean feel. During a stroll you will discover numerous churches and other architectural and cultural sites. Overnight in port.

Thursday MAKARSKA - PUČIŠĆA - OMIŠ (B,L,CD)
Early in the morning we continue our trip towards Pučišća, a typical Mediterranean place, situated on the northern side of the Brač island at the bottom of the deep bay. It is cradle of the world’s famous stone of Brač. There is a possibility of visiting a stone-masonry workshop, one of the few stone masonry workshops left in Europe. We continue to Omiš, a picturesque town surrounded with steep rocky mountain cliffs, where the river Cetina flows into the Adriatic sea, ideal for river rafting on the streams of the Cetina river. Omis has a famous heritage of piracy! Overnight in port where we will have Captain's dinner on board.

Friday OMIŠ - SPLIT (B,L)
Departure for our last destination, the town of Split, a city where the old town and Diocletian's Palace are under UNESCO protection. Diocletian's palace is 1700 years old and the Emperor chose this spot for his retirement villa. On arrival join our guided tour of Split with an English speaking guide (included on Premium & Premium Superior). Overnight in Split.

Saturday SPLIT (B)
After an early breakfast say goodbye to the crew and all your new friends! 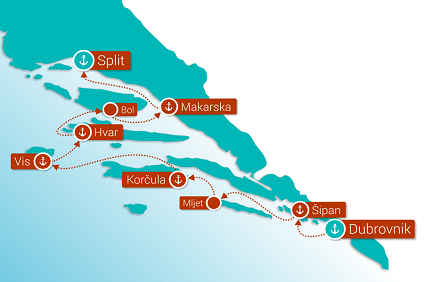