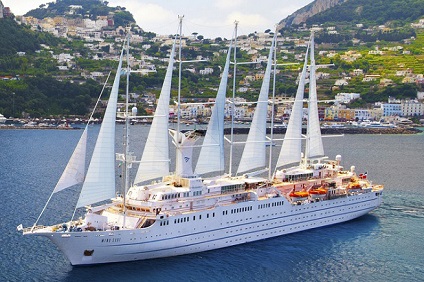 Roam between the broken monoliths and columns in the Roman Forum, Western Civilization’s former epicenter. Gaze across Catania’s umber-hued, terracotta-tiled skyline to the steaming summit of Mount Etna as you sample authentic Sicilian dishes like densely textured handmade pasta topped with aromatic variations like sundried tomatoes, golden-brown dried grapes, fresh basil and minced garlic. This exquisite cruise around Italy’s Apennine Peninsula is abundant in opportunities to explore the lesser-known landmarks and narrow ancient streets of sleepy villages throughout the central Mediterranean. Sip citrus-sweet limoncello from frosty glasses while locals haggle over the proximities of their bocce balls on nearby gravel courts. Land at the tiny port of Lipari in the Aeolian Islands north of Sicily, and explore a Norman Castle built in medieval times, or master the art of Sicilian-style pizzas as you combine local ingredients into your own culinary creation. Step inside the cool and shady Romanesque splendor of Kotor Cathedral in Montenegro, or venture to the nearby pedestrian-only village of Perast and sample sweets recreated from Baroque-era recipes. Capture the Old World ambiance of Split’s Diocletian Palace in the right light during a hands-on photo tour with an award-winning international photojournalist. Your delightful journey concludes in Venice among romantic gondolas and exquisite Italian architecture, where you can reflect on your cruise memories as you float canals or search for last-minute souvenirs small, family-owned artisan shops featuring handcrafted glassware and ornamental metalwork.

Venice, Italy
No other sea approach in the Adriatic raises goose bumps like Venice. On your luxurious home-away-from home, you arrive already equipped with a sense of what it’s like to live in the city that’s neither land nor water. Add your own sigh to the Bridge of Sighs, sip a spritz al bitter as you plot your agenda, and let the water taxis do your navigating unless you don’t mind getting lost. Not such a bad prospect, with serendipitous discoveries around every corner.

Split, Croatia
Split welcomes you with open arms, Mediterranean style, and a bustling harbor lined with busy cafés. Beyond, looms stately Diocletian’s Palace in the center of town. Within the palace walls, a majestic cathedral soars, surrounded by polished marble streets lined with every type of tempting shop. If you’re longing for a quiet respite, head for the western end of town for an easy stroll through a verdant mountain park.

Dubrovnik, Croatia
While larger ships pass by, we anchor right beyond the famous walled city so you can admire its beauty with every glance. Tender ashore and step right into Old Town where no cars are allowed, just eons of history. Capture the exhilarating views on your camera — and in your memory. End your day at the Buza Café (if you can find it) watching bold divers leap off the cliffs into the crystalline sea.

Kotor, Montenegro
This is one of Montenegro’s most beautiful bays, and the approach offers one breathtaking fjord-like view after another. Just when you’ve reached your fill of blues and greens, the bright red rooftops of the medieval town come into view. Now the real fun begins. The charming streets of Old Town remain car free, filled with 12th century Baroque palaces and Romanesque churches. For a fresh perspective climb to the fortress on the hill for a breathtaking vista.

Giardini Naxos, Italy
Known for its beaches, amazing panoramic view of the bay and surrounding hills, and its small, but bustling fishing port, Giardini Naxos attracts many visitors. The seafront is lined with hotels, pubs, restaurants and pizzerias. Your Destination Discovery Event here will feature a family-run winery with Sicilian wine tasting and lunch. And you’ll have time for an optional tour to the amazing archaeological ruins in Taormina including the amphitheater still used today.

Rome, Italy
2,500 years of history are woven into the fabric of modern Rome. You can feel it in the glory of the Sistine Chapel in the Vatican. Or as you wander sidestreets that open onto piazzas, fountains, Bernini sculpture, and elegant courtyards. Famous treasures are legion in Rome: the Colosseum…the Forum…St. Peter’s Cathedral…the Trevi Fountain…the Spanish Steps. Take time out between sights to do as the Romans do: enjoy a three-hour lunch, shop, people-watch, or savor the best gelati in the world.

Catania, Italy
In this fascinating city nestled at the foot of Mount Etna you’ll find a thriving downtown that is not only the active city center, but a historic UNESCO World Heritage Site, combining the best of ancient and modern city style. Your options are as wide as your imagination. Explore the temperamental volcano that has reshaped the city many times, visit the beautiful setting of Taormina where stunning views and beautiful antiquities vie for your attention or the UNESCO site of Tantalica. If you prefer, explore the ancient city of Syracuse, called by Cicero himself “the most beautiful of all,” and another UNESCO site.

Gozo, Malta
Pretty Xlendi Bay lies on the west coast of Gozo, an island long thought to be the mythical Ogygia of Homer’s Odyssey. In the story, Calypso fell in love with Odysseus and held him captive for seven years.. The reputed Calypso Cave is just one of several intriguing caves on the island. There’s also Caroline’s Cave, a natural grotto that was once a private swimming hole for nuns. Surprisingly for such a small island, Gozo is home to the oldest freestanding temples in the world, the Ggantija Temples, nestled among the rolling green hills. You should also visit the Citadella, a small, fortified town that houses the island’s Cathedral, the Museum of Archaeology, the Folklore Museum, and the Old Prisons.

Valletta, Malta
Malta’s capital city, a UNESCO World Heritage Site, is among the world’s smallest, yet definitely most charming. Graced with the paintings of Caravaggio and kissed by beautiful shorelines, you’ll find photographic icons at almost every turn. Not to be missed is a visit to the stately Palazzo Parisio to glimpse the enchanting lifestyle of Malta’s nobility. Our stay here also allows the exquisite romance of an evening walk through the beautiful lanes of Mdina, Malta’s enigmatic “Silent City.”

Porto Empedocle, Italy
Here you’ll find what are widely acclaimed as the best, ancient ruins in the entire Mediterranean. Imagine the wonders of Athens, of Ephesus, of legendary Olympia itself. Then imagine them all in one place, at Agrigento, a UNESCO World Heritage Site. As you wander the verdant ridge overlooking the Mediterranean you will be transported to the 5th and 6th centuries. The irresistible scent of olive, almond, and eucalyptus trees will entice you back to the present. This is one of the world’s most beautiful sites.

Amalfi, Italy
The town of Amalfi lies at the mouth of a deep ravine surrounded by dramatic cliffs and coastal scenery. As part of the Amalfi Coast, it has been designated a UNESCO World Heritage Site and is an important tourist destination. The whole region is famed for its lemons, which are about double the size of other lemons, and the production of the limoncello liqueur. An optional tour can take you to the UNESCO archaeological areas of Pompeii, Positano and Ravello. 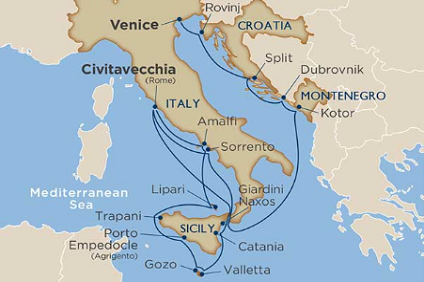