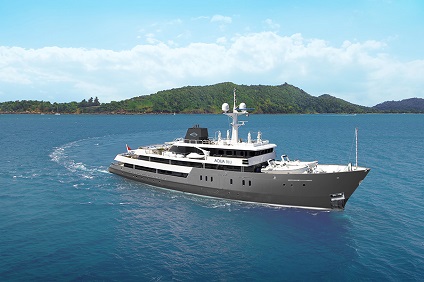 At almost every turn, the mesmerising turquoise and blue hues of Raja Ampat’s waters constantly jostle for your attention and beckon you to dive down and under. Located at the heart of the Coral Triangle, the region is known to house every kind of underwater habitat imaginable; pristine reef flats, secret bays, swift channels, deep drop-offs, shallow seamounts, mangroves, marine lakes and protected coral gardens are just a sample of the types of marine habitats that can be found in the roughly 20,000 square mile region.

As a result of the sheer diversity of underwater habitats, Raja Ampat is a thriving subterranean metropolis that houses more than 1,500 species of tropical marine fish (about 50% of all known species) and more than 600 species of coral (nearly 75% of all known species of reef-building corals). Cape Kri in the Dampier Strait notably holds the world record for the most number of species counted in a single dive (374 in total).

Nature’s underwater splendor isn’t defined with sheer numbers alone. Raja Ampat also happens to be in the middle of a major cetacean migration route and aggregation site where various whales and dolphin species have been sighted. Of great significance is also the fact that the region is the meeting point of the Indian and Pacific Ocean called the Indonesian Throughflow, where a six inch (15cm) average height difference between these two oceans creates an immense exchange of water carrying millions of aquatic eggs and larvae that spawn to life or serve as a vital source of food for marine animals.

At the same time, the cooler water from deep sea trenches and basins has also played a part in Raja Ampat’s stunning biodiversity. These environments offered marine life shelter from glacial water in the ice ages, and today offers natural protection against rising sea temperatures that have resulted in the bleaching of other relatively unprotected coral habitats including the Great Barrier Reef and the Maldives. Endowed with natural geological defenses, Raja Ampat is truly Mother Nature’s last frontier.

Aqua Expeditions’ Raja Ampat cruise aboard the Aqua Blu cruise ship sails every year from December through to February, the best season to discover the region. The cruise sets sail on 7-night itineraries, departing from the city of Sorong.

Come sail with us on the Aqua Blu and experience one of the world’s most rewarding marine expeditions.

Sorong Harbour
Arrive at Sorong to a warm welcome. Board Aqua Blu and cruise to Gam Island as the sun sets.

Gam Island, Waisai & Kabui
Awake to the beauty of Gam Island. Early morning trekking at Gam and Waisai. Tour Kabui and Karst in the afternoon on tenders, or visit a local village and bat cave on foot.

Cape Kri - Arborek
Rise in the morning to birdsong and explore the soft sandy coastline of Cape Kri on foot before a short cruise to a dive site that holds the world record for species spotted in a single 90-minute dive. Snorkeling is also highly rewarding. Sail to Arborek Island for dinner.

Wayag
Watch the magnificence of Pulau Wayag’s limestone islets and lagoons unveil before your eyes as the sun rises. Climb to the top of Mount Pindito for a bird’s eye view of the stunning surroundings and attempt to spot rare birds of paradise before making the lagoons and reefs your home for the day. Arrival at Aljui bay and round off with dinner by the sea.

Aljui Bay & Pulau Pef
Visit a pearl farm in Aljui Bay before cruising to Pulau Pef and Yangello for snorkeling and watersports in the afternoon. Explore hidden lagoons and karst limestone islets aboard our tenders or kayaks. Arrive at Dayang Island for dinner.

Dayang Island
Embark on a morning trek with our guides to look for birds of paradise in the lush forest. Dayang island is known for plenty of marine life, especially manta rays. Snorkeling is excellent at Wai along the bordering reef systems. For adventurous divers, explore the sunken wreckage of a WW2 P47D fighter plane and the beautiful reefs and sea-mounts of Tapok.

Birie Island
Arrival in Birie, a group of islands, bays and lagoons that lie just off the coast of north Batanta. Discover mangrove-fringed bays and plenty of wildlife en route to the spectacular waterfall in Batanta mainland is a must. Ship will cruise eastwards towards Sorong during dinner. 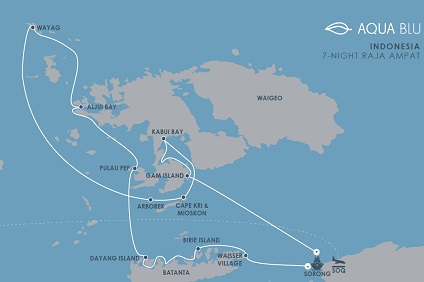