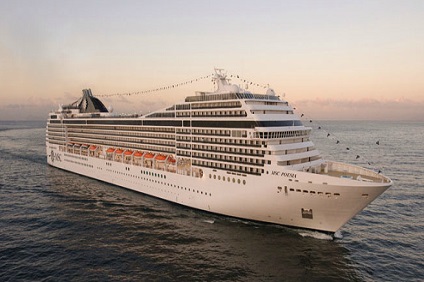 MSC Poesia is an innovative cruise ship with elegant style that brings traditional craftsmanship to creative designs. Step aboard and you’ll enter a refined world of comfort, from the spectacular foyer waterfall to the Zen Garden, authentic Japanese Sushi bar and opulent MSC Aurea Spa wellness centre with steam room, sauna and divine massages to pamper body and mind, it’s the perfect place to unwind.

There are many sports and fitness activities available on board, including a basketball court, tennis court, shuffleboard, state-of-the-art gym and minigolf. Kids and teens are equally well served, with their own clubs and parties, a dedicated Stone Age and Dinosaur Play Area, stunning video games and even a DJ disco! Plus there are naturally all the resort amenities you could wish for, including 3 swimming pools, 4 whirlpools and a giant poolside cinema screen.

The gourmet cuisine on board brings you specialities from around the world, but retains its Mediterranean heart, rooted in the values of the Italian slow food movement. With MSC, every succulent dish is freshly prepared with care by our skilled chef’s from prime quality ingredients.

The varied lounge bars offer similarly refreshing originality and authenticity, from the Grappolo d’Oro wine-tasting bar to the Mojito cocktail bar and sumptuous design of the cigar room.

Whether a family holiday, luxury treat or romantic escape, MSC Poesia is a ship that offers a truly inspiring cruise experience.

Barcelona, Spain
Barcelona – Spain’s second city, and the self-confident capital and port of Catalunya – vibrates with life, and there’s certainly not another city in the country to touch it for sheer style, looks or energy.

A cruise excursion to Barcelona city centre will take you to discover its world-class art museums and its fashionable designer restaurants, bars, galleries and shops. And in Antoni Gaudí’s extraordinary church of the Sagrada Família and the world-famous boulevard that is the Ramblas, you have two sights that are high up on any Mediterranean cruise sightseeing list.

A holiday in Barcelona can start with the Ramblas, and then dive straight into the medieval nucleus of the city, the Barri Gòtic. But there are plenty of other central old-town neighbourhoods to explore too, from La Ribera – home to the celebrated Museu Picasso – to funky El Raval, where cool bars, restaurants and boutiques have mushroomed in the wake of the striking contemporary art museum, MACBA.

Even if you think you know these heavily touristed neighbourhoods well, there’s always something else to discover during an MSC excursion – tapas bars hidden down alleys little changed for a century or two, designer boutiques in renovated old-town quarters, bargain lunches in workers’ taverns, unmarked gourmet restaurants, craft outlets and workshops, fin-de-siècle cafés, restored medieval palaces and neighbourhood markets.

On Passeig de Gràcia there is Gaudí’s Casa Batlló, designed for the industrialist Josep Batlló: the stone facade hangs in folds, like skin, while on the rooftop sprout the celebrated mosaic chimneys and a little tower topped with a three-dimensional cross.

The mountain of Montserrat stands just 40km northwest of Barcelona and it’s a popular trip out from the city. Once there, you can visit the basilica and monastery buildings which fan out around an open square, and there are extraordinary mountain views from the terrace.

Rome, Italy
The port of Civitavecchia is one of the largest in Italy and is, of course, a destination of MSC Cruises in the Mediterranean. Civitavecchia enjoys a millenary history due to its coves along the coast, which offered a perfect shelter for vessels, making it a natural port long before cruise ships sailed the seas, and in fact the port was known to the Romans as Centumcellae.

During your holiday in Civitavecchia you can easily visit its centre on foot. Amongst the most important monuments to visit are the Forte Michelangelo, built by Bramante in the 16th century, the ancient walls of the old port, where there is a fountain in travertine marble by Vanvitelli, and the Rock, an inexpugnable fortress that has been looming over the city and port for over a thousand years.

In Piazza Vittorio Emanuele II, Civitavecchia’s main square, one can admire the majestic baroque cathedral dedicated to St. Francis, built at the end of the 18th century on a smaller church which could no longer host a rapidly growing community.

Piazza Leandra, set in the historic centre, is a typical Italian piazza with a fountain in the centre, dedicated to Leandro, an elderly seaman of the Middle Ages who convinced his fellow citizens to settle on the Mediterranean coast in spite of the incursions by Saracen pirates.

There are a host of bars and restaurants for a taste of seafood cuisine, from poached baby octopus to fried rocket to stuffed squid or the pizza alla civitavecchiese with anchovies and garlic. The Taurine Baths, of the even more ancient Etruscan period, are a grand archaeological site just a few kilometres outside the city, a site that we recommend to the cruiser with a passion for ancient history.

Indeed “La Superba” (The Superb), as it was known at the height of its authority as a Mediterranean superpower, boasts more zest and intrigue than all the surrounding coastal resorts put together.

During a holiday to Genoa you can explore its old town: a dense and fascinating warren of medieval alleyways home to large palazzi built in the sixteenth and seventeenth centuries by Genoa’s wealthy mercantile families and now transformed into museums and art galleries. You should seek out the Cattedrale di San Lorenzo, the Palazzo Ducale, and the Renaissance palaces of Via Garibaldi which contain the cream of Genoa’s art collections, as well as furniture and decor from the grandest days of the city’s past, when its ships sailed to all corners of the Mediterranean Sea.

The Acquario di Genova is the city’s pride and joy, parked like a giant ocean liner on the waterfront, with seventy tanks housing sea creatures from all the world’s major habitats, including the world’s biggest reconstruction of a Caribbean coral reef. It’s a great aquarium by any standards, the second largest in Europe by capacity, and boasts a fashionably ecology-conscious slant and excellent background information in Italian and English.

Just 35 km south of Genoa, there’s no denying the appeal of Portofino, tucked into a protected inlet surrounded by lush cypress- and olive-clad slopes. It’s an A-list resort that has been attracting high-flying bankers, celebs and their hangers-on for years, as evidenced by the flotillas of giant yachts usually anchored just outside. It’s a tiny place that is attractive yet somehow off-putting at the same time, with a quota of fancy shops, bars and restaurants for a place twice its size.

Marseille, France
Are you ready to find your way around Marseille on an MSC Mediterranean cruise?
When cruising southern France, you have to know that Marseille is the most renowned and populated metropolitan area in the country after Paris and Lyon. When you alight from your MSC cruise ship, the cafés around the Vieux Port, where glistening fish are sold straight off the boats on quai des Belges, are wonderful spots to observe the city’s street life.

Particularly good in the afternoon is the north (Le Panier) side, where the terraces are sunnier and the views better. The best view of the Vieux Port is from the Palais du Pharo, on the headland beyond Fort St-Nicolas, or, for a wider angle, from Notre-Dame-de-la-Garde, the city’s Second Empire landmark atop the La Garde hill. To the north of the Vieux Port is the oldest part of Marseille, Le Panier, where, up until the last war, tiny streets, steep steps Mediterranean introduction and houses of every era formed a vieille ville typical of the Côte.

You can enjoy many MSC cruise excursions from the Vieux Port. Were it not for the great metropolis of Marseille, just 30 km south, Aix-en-Provence would be the dominant city of central Provence. Aix is more immediately attractive, a stately and in parts pretty place that’s traditionally seen as conservative.

Capital of the Catholic Church during the early Middle Ages and for centuries a major artistic centre, Avignon remains another unmissable excursion. Low medieval walls still encircle Avignon’s old centre, as it nestles up against a ninety-degree bend in the Rhône river. Their gates and towers restored, the ramparts dramatically mark the historic core off from the formless sprawl of the modern city beyond.