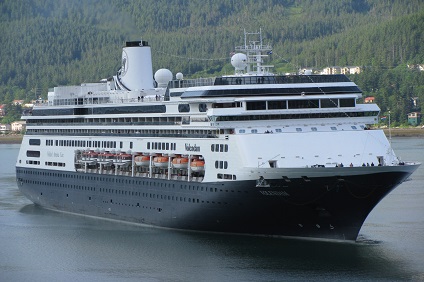 Elegant and spacious, Volendam takes her décor cues from the garden. Her grand public spaces are graced with floral fabrics and tapestries, as well as huge vases of fresh floral arrangements. While on board, explore the wonders of nature in BBC Earth Experiences. Enjoy a cooking show or hands-on workshop with America’s Test Kitchen. Relax with a spa treatment at the Greenhouse Salon & Spa. Or dine in one of our selection of fine restaurants.

Ft Lauderdale, Florida, US
Port Everglades, the port for Fort Lauderdale is the world's premier cruise port with more home-ported ships and cruise lines than any other port in the world.

Philipsburg, Sint Maarten
This Leeward island has been famously bisected into French and Dutch territories since 1648, and is referred to both as Saint Martin and Sint Maarten. In their respective capitals—Marigot and Philipsburg—there are ancient stone forts and candy-colored buildings lining winding streets. The Dutch side has a slightly larger population but is a bit smaller, at 34 square kilometers (13 square miles), versus the 53-square-kilometer (20-square-mile) Saint Martin.

On the French side, there are cafés serving café au lait and pain au chocolat and sidewalk bistros offering chilled rosé and savory crepes. A variety of luxury shops and cosmopolitan boutiques beckon to sophisticated shoppers who love a good bargain—the entire island has no sales tax.

Castries, Saint Lucia
So you think you've "done" the Caribbean? St. Lucia kindly asks you to think again. With mountain peaks, plunging valleys, lush rain forests, historic sites, tropical flora and fauna and the world's only drive-in volcano, this island of 165,000 residents is more than just pretty palm-fringed beaches along a turquoise sea—though there happen to be plenty of those, too. No wonder France and England battled for nearly 200 years to control this sun-kissed island. Wayfarers arriving these days have less nefarious plans and want only to preside over St. Lucia's legendary natural wonders and eco-adventures. Choose a heart-thumping hike up the Pitons—named a UNESCO World Heritage Site in 2004—or a treetop tram ride over the flower- and bird-filled rain forest. Humdrum may be hard to find, but there are plenty of warm welcomes from friendly locals. The island's eclectic culture and history are shared daily through the Creole patois spoken in markets and on street corners, in the French names of colorful fishing villages and in savory recipes infused with African, French and Carib heritage. And have we mentioned the sublime sunsets? Some Caribbean islands really do have it all.

Willemstad, Curacao
The capital of Curaçao, Willemstad, is almost as old as a more famous Dutch settlement—it was founded in 1634, just 10 years after New Amsterdam, later called New York. But while the Dutch control of New Amsterdam was relatively brief, Curaçao remains a part of the Netherlands to this day. Its historic center is a unique mixture of Dutch architecture and Caribbean pastels, its gabled row houses overlooking Sint Anna Bay, a waterway dividing the city in two and connecting the Caribbean to the protected Schottegat Bay. The entire historic center of Willemstad has been recognized as a UNESCO World Heritage Site. While Willemstad's legendary days of yore can be explored at institutions like the Kura Hulanda and Curaçao Maritime Museum, this is a vibrant, living city too. Highlights of this multicultural melting pot might include a stop at its floating market and a visit to a curaçao distillery to taste the famous local liqueur. Natural wonders await as well: Some of the Caribbean’s most stunning diving and snorkeling spots are here. Finally, a meal in Willemstad will let you experience the diversity of the island through the surprising flavors of its cuisine, which reflects European, Caribbean and Latin American influences.