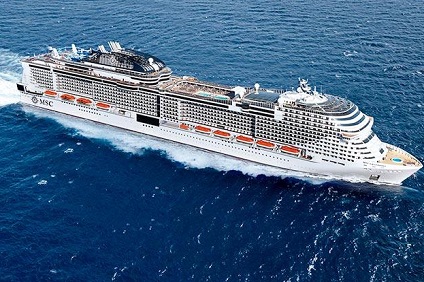 Building on the success of the Meraviglia Class, she offers even more public space than her sister ships, along with a series of exciting innovations.

Cirque du Soleil, a world leader in live entertainment, has created 2 brand new shows exclusively for MSC Grandiosa, which you can enjoy in a high-tech lounge while savouring a superb culinary experience. And if you choose the Aurea Experience, you’ll appreciate the pleasures of flexible dining and unlimited drinks in a dedicated restaurant.

Barcelona, Spain
Barcelona – Spain’s second city, and the self-confident capital and port of Catalunya – vibrates with life, and there’s certainly not another city in the country to touch it for sheer style, looks or energy.

A cruise excursion to Barcelona city centre will take you to discover its world-class art museums and its fashionable designer restaurants, bars, galleries and shops. And in Antoni Gaudí’s extraordinary church of the Sagrada Família and the world-famous boulevard that is the Ramblas, you have two sights that are high up on any Mediterranean cruise sightseeing list.

A holiday in Barcelona can start with the Ramblas, and then dive straight into the medieval nucleus of the city, the Barri Gòtic. But there are plenty of other central old-town neighbourhoods to explore too, from La Ribera – home to the celebrated Museu Picasso – to funky El Raval, where cool bars, restaurants and boutiques have mushroomed in the wake of the striking contemporary art museum, MACBA.

Even if you think you know these heavily touristed neighbourhoods well, there’s always something else to discover during an MSC excursion – tapas bars hidden down alleys little changed for a century or two, designer boutiques in renovated old-town quarters, bargain lunches in workers’ taverns, unmarked gourmet restaurants, craft outlets and workshops, fin-de-siècle cafés, restored medieval palaces and neighbourhood markets.

On Passeig de Gràcia there is Gaudí’s Casa Batlló, designed for the industrialist Josep Batlló: the stone facade hangs in folds, like skin, while on the rooftop sprout the celebrated mosaic chimneys and a little tower topped with a three-dimensional cross.

The mountain of Montserrat stands just 40km northwest of Barcelona and it’s a popular trip out from the city. Once there, you can visit the basilica and monastery buildings which fan out around an open square, and there are extraordinary mountain views from the terrace.

Marseille, France
Are you ready to find your way around Marseille on an MSC Mediterranean cruise?

When cruising southern France, you have to know that Marseille is the most renowned and populated metropolitan area in the country after Paris and Lyon. When you alight from your MSC cruise ship, the cafés around the Vieux Port, where glistening fish are sold straight off the boats on quai des Belges, are wonderful spots to observe the city’s street life.

Particularly good in the afternoon is the north (Le Panier) side, where the terraces are sunnier and the views better. The best view of the Vieux Port is from the Palais du Pharo, on the headland beyond Fort St-Nicolas, or, for a wider angle, from Notre-Dame-de-la-Garde, the city’s Second Empire landmark atop the La Garde hill. To the north of the Vieux Port is the oldest part of Marseille, Le Panier, where, up until the last war, tiny streets, steep steps Mediterranean introduction and houses of every era formed a vieille ville typical of the Côte.

You can enjoy many MSC cruise excursions from the Vieux Port. Were it not for the great metropolis of Marseille, just 30 km south, Aix-en-Provence would be the dominant city of central Provence. Aix is more immediately attractive, a stately and in parts pretty place that’s traditionally seen as conservative.

Capital of the Catholic Church during the early Middle Ages and for centuries a major artistic centre, Avignon remains another unmissable excursion. Low medieval walls still encircle Avignon’s old centre, as it nestles up against a ninety-degree bend in the Rhône river. Their gates and towers restored, the ramparts dramatically mark the historic core off from the formless sprawl of the modern city beyond.

Indeed “La Superba” (The Superb), as it was known at the height of its authority as a Mediterranean superpower, boasts more zest and intrigue than all the surrounding coastal resorts put together.

During a holiday to Genoa you can explore its old town: a dense and fascinating warren of medieval alleyways home to large palazzi built in the sixteenth and seventeenth centuries by Genoa’s wealthy mercantile families and now transformed into museums and art galleries. You should seek out the Cattedrale di San Lorenzo, the Palazzo Ducale, and the Renaissance palaces of Via Garibaldi which contain the cream of Genoa’s art collections, as well as furniture and decor from the grandest days of the city’s past, when its ships sailed to all corners of the Mediterranean Sea.

The Acquario di Genova is the city’s pride and joy, parked like a giant ocean liner on the waterfront, with seventy tanks housing sea creatures from all the world’s major habitats, including the world’s biggest reconstruction of a Caribbean coral reef. It’s a great aquarium by any standards, the second largest in Europe by capacity, and boasts a fashionably ecology-conscious slant and excellent background information in Italian and English.

Just 35 km south of Genoa, there’s no denying the appeal of Portofino, tucked into a protected inlet surrounded by lush cypress- and olive-clad slopes. It’s an A-list resort that has been attracting high-flying bankers, celebs and their hangers-on for years, as evidenced by the flotillas of giant yachts usually anchored just outside. It’s a tiny place that is attractive yet somehow off-putting at the same time, with a quota of fancy shops, bars and restaurants for a place twice its size.

Naples, Italy
Naples is a large, sprawling Mediterranean port, with a centre that has many different focuses just waiting to be discovered on an MSC Mediterranean cruise excursion.

No trip to Naples is complete without visiting the area between Piazza Garibaldi and Via Toledo, roughly corresponding to the old Roman Neapolis (much of which is still unexcavated like in many other Italian cities).

The old part of Naples – the centro storico – is formed by the main streets of Via dei Tribunali and Via San Biagio dei Librai (the latter also known as “Spaccanapoli” as it literally splits Naples in two), which still follow the path of the ancient Roman roads. This is much the liveliest and most teeming part of Naples, an open-air kasbah of hawking, yelling humanity that makes up in energy what it lacks in grace. But it’s the city’s most intriguing quarter, and a must-see on any cruise to Naples. The Duomo is a Gothic building from the early thirteenth century (though with a late nineteenth-century neo-Gothic facade) dedicated to the patron saint of the city, San Gennaro.

MSC Mediterranean cruises also offer excursions to Pompeii. One of Campania’s most important Roman commercial centres – a moneyed resort for wealthy patricians and a trading town that exported wine and fish – the eruption of Mount Vesuvius in AD 79 in effect froze the town’s way of life as it stood at the time.

Trips can also be taken to the island of Capri, place of legend, home to the mythical Sirens and a much-eulogized playground of the super-rich in the years since – though now it has settled down to a lucrative existence as a target for day-trippers from the mainland.

Definitely worth a visit, but these days the origins of much of the purple prose may be hard to find.

Messina, Italy
Messina may well be your first sight of Sicily, and – from your MSC holiday cruise ship – it’s a fine one, the glittering town spread up the hillside beyond its sickle-shaped Mediterranean harbour.

On a shore excursion you can discover Messina’s most important monument, the Duomo, which epitomizes the city’s phoenix-like ability to re-create itself from the ashes of its last disaster. It’s the reconstruction of a twelfth-century cathedral erected by Roger II, one of a series of great Norman churches of Sicily that include the sumptuous cathedrals of Palermo and Cefalù. The Duomo’s detached campanile, or bell tower, claims to be the largest astronomical clock in the world, and puts on its best show at noon every day, when a bronze lion (Messina’s ancient emblem) unleashes a mighty roar over the city that can be quite alarming if you’re not expecting it!

Just back from the Duomo, the truncated section of the twelfth-century Chiesa Annunziata dei Catalani squats below pavement level, and is Messina’s only surviving example of Arab/Norman church-building.

When you are cruising the Mediterranean Sea with MSC Cruises, the most obvious excursion from Messina is to the almost too charming hill town of Taormina, spectacularly located on a rocky bluff between the Ionian Sea and the soaring peak of Mount Etna, whose summit with its bleak lava wilderness is one of the most memorable landscapes Italy has to offer.

Once the beloved retreat of poets and writers, Taormina is now the most illustrious resort on the entire island, captivating its visitors with its famous ancient theatre, grand hotels and engaging small-town charm.

Valletta, Malta
The UNESCO-protected port of Valletta, the capital of the island of Malta, is one of the must-see stops for every Mediterranean cruise of merit.

You can admire this port, constructed in the second half of the 16th century by the Frenchman Jean de la Valette and moulded by the religious and military Order of Saint John of Jerusalem, from your MSC ship even before disembarking. The over 300 monuments rising in little more than half a square kilometre make this a place with one of the greatest density of historical attractions to visit during a cruise, not mentioning other attractions such as its beaches, seaside locales and restaurants.

An excursion to the island can start right from its capital, Valletta, which enchants the cruise-goer with its famous Maltese balconies, which decorate the facades of houses in its old quarter. Surrounded by a multitude of churches, which the islanders assure are as many as the days of the year, the St. John’s Co-Cathedral is one of Malta’s biggest tourist attractions.

The National Museum of Archaeology, on the other hand, hosts prehistoric artefacts found on the island. By the Grand Harbour, one can visit the underground passages of Auberge de Castille and the beautiful Baracca Gardens, which overlook the harbour; at night, when the city gates would close, its porticoes served as shelter for travellers. To get a taste of the life of Malta’s ancient nobility, visit Casa Rocca Piccola.

A 16th century Palazzo now the residence of the 9th Marquis De Piro, it has period furnishings and has a bomb shelter built for protection against bombings during the Second World War. The set of the film Popeye can still be seen from Malta’s largest beach, as well as the Sanctuary of Our Lady of Mellieha with a fresco of the Blessed Virgin Mary with Christ; according to tradition, Saint Luke, who was shipwrecked on the island with Saint Paul, is the author of this Byzantine-style fresco.