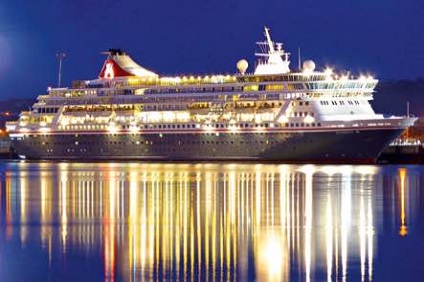 Get closer to jaw-dropping wintertime scenes and revel in the seasonal beauty of northern Norway, with visits to three incredible destinations in Europe’s northernmost region. You’ll have opportunities to see stunning landscapes that sparkle in the snow and enjoy an array of authentic Arctic experiences, while the icing on the cake will be the chance to witness the astounding Northern Lights.

Spending four consecutive days exploring Arctic Norway, at the most magical time of year to visit the region, will be a simply unforgettable experience. Stepping ashore at Narvik, you’ll have opportunities to marvel at the frozen splendour of majestic, snow-covered mountains on exhilarating husky sledding and snowmobiling excursions. The Polar Park, where you can encounter native wildlife including bears, lynx and wolves, is within your reach here too. Stopping overnight in Alta, considered one of the best places on earth to see Aurora Borealis, could be the highlight of your holiday. With luck on your side, you may be fortunate enough to see Mother Nature’s remarkable light show illuminate the clear night sky with dancing ribbons of colour. There will be time to immerse yourself in Alta’s authentic Sami culture; see the UNESCO-listed rock carvings of Hjemmeluft at the fascinating Alta Museum; and even visit the unique Sorrisniva Igloo Hotel.

Spending a day in Tromsø will also afford an opportunity to uncover the abundant attractions of a city known as the ‘Gateway to the Arctic’. Take time to explore and you’ll find everything from Neoclassic architecture to the Mack Brewery and the iconic, iceberg-shaped Arctic Cathedral. Be sure to ride a cable car up Mount Storsteinen here – the views of Tromsø and its breathtaking winter scenery from the top are not to be missed. Elsewhere, en route to and from Norway’s Arctic north, you’ll also visit Molde and Ålesund. Perhaps begin your time in Norway with a ride on the picturesque Rauma Railway or a journey along the Atlantic Road, regarded one of the world’s greatest roads; and before returning home, make the most of your time in Ålesund to admire the town’s pretty art-nouveau architecture and take in the panoramas available from atop Mount Aksla.

Molde, Norway
Depending on your preference, Molde is the town of roses or jazz. Sitting alongside the Romsdalfjord, the town benefits from rich, fertile soil and a mild climate and the town’s gardens - both public and private - are full of flowers, especially roses. In the market square is a statue of the Little Rose Seller.

Every July, Molde hosts a famous jazz festival, which takes over the whole town, with many of the concerts being held in the Romsdal Museum. This is one of the biggest folk museums in Norway, with over fifty historic buildings including farmhouses, smokehouses and a small chapel. On Town Street are local town houses from the pre-war period. The Fisheries Museum is also in the open air, with old houses, fishermen’s shacks, a school and even a cod-liver oil factory.

Moldemarka - a vast recreational hiking area located just north of Molde city centre - is one of the most popular attractions with locals and visitors alike. Famous for the Molde panorama - a magnificent view of over 222 mountains, lush green hills and the North Atlantic Ocean - Moldemarka has a network of easily accessible paths and is easy to climb, hike and ski all year round.

A drive along the incredible Atlantic Road - an 8 kilometre stretch of road that links Molde and Kristiansund - is breathtaking experience, and one that's not-to-be-missed during your time here. The twisting, rising and falling road passes through beautiful rocky coastlines, over the sea and through vast hills and mountains. Featuring some unbelievable architecture and mind-blowing bridges, a drive along this amazing stretch of tarmac was once called the world’s best road trip by The Guardian.

Alta, Norway
As one of the best places on earth to witness the Northern Lights in winter, and experience the sensation of the Midnight Sun in summer, Alta is a truly magical destination. Originally inhabited by the indigenous Sami people, the area has a fascinating cultural history. Rock carvings in nearby Hjemmeluft are believed to date from around 4,200 to 500 BC. Now a UNESCO World Heritage site, the carvings on display in the Alta Museum are evidence of the existence of human activity in the far north during prehistoric times.

Alta needed rebuilding after WWII, so the buildings of this northern Norwegian port are relatively new; notable architecture includes the Northern Lights Cathedral. A particular highlight is the Sorrisniva Igloo Hotel. Everything inside and outside the hotel is made of ice, and is open to visitors from January until it melts away in spring.

The head of the Altafjord, where the Altaelva runs through the town, is said to have the best salmon fishing in the world. It’s still possible to see the fish leaping up the river, despite the construction of the 100m Altadammen in the 1970s.

Tromsø, Norway
The island city of Tromsø is one of northern Norway’s true delights. Rich with neo-classical architecture, the city known as the ‘Gateway to the Arctic’, contains the largest number of wooden houses in Northern Norway, and its old world charm makes it a real joy to explore.

A major cultural hub above the Arctic Circle, Tromsø is famed as a viewing point for the colourful Northern Lights that often light up the night sky. The city’s most recognisable landmark is the must-visit Arctic Cathedral. Built in 1965, the cathedral’s distinctive iceberg-shaped design was inspired by the landscapes of Northern Norway and features a beautiful glass mosaic.

The many museums and galleries in the city include the Perspektivet Museum – set in a neo-classical building built in 1838 that has exhibits from Tromsø’s past, plus the Art Museum of Northern Norway and the Mack Brewery. Tromsø is also home to Polaria, an Arctic aquarium that is popular with locals and tourists alike. The aquarium’s tanks are full of Arctic fish species, and the friendly bearded seals always delight the visiting crowds.

Tromsø, and the stunning landscapes that surround it, are best viewed from the top of the Storsteinen Mountain, which stands 420 metres above sea level. Accessible via cable car, the peak is easy to reach and one of the most popular spots on the edge of the city. 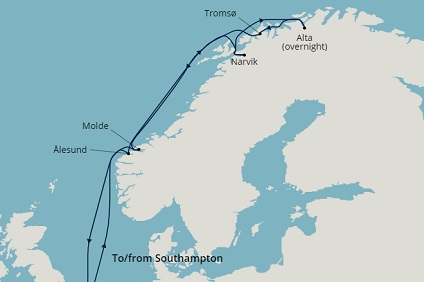