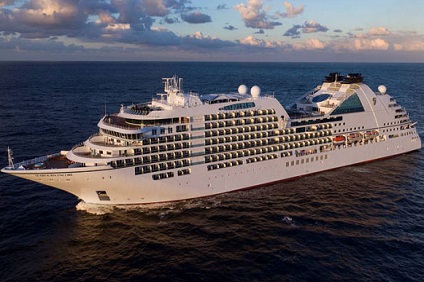 7 Night cruise sailing from Rome to Barcelona onboard Seabourn Encore.

7 Night cruise sailing from Rome to Barcelona onboard Seabourn Encore.

Seabourn Encore is as strikingly beautiful and as excitingly innovative as any Seabourn has ever debuted. It will crown a fleet that is already the newest, most modern and most acclaimed in the ultra-luxury segment. Modeled on the award-winning trio of ships introduced with Seabourn Odyssey in 2009, Seabourn Encore represents another welcome stage in the evolution of small-ship cruising, which Seabourn pioneered and has consistently expanded and enriched.

To further advance its mission with Seabourn Encore, Seabourn enlisted the participation of master designer Adam D. Tihany. Although the architecture of Seabourn Encore is not radically different from Seabourn’s other three ships, Tihany’s vision is present throughout the ship. There is a new softness and a curvaceous elegance to his designs that reflect a noticeably bespoke aesthetic. The vessel exudes ultra-luxury with design elements often found in private yachts. Nautical visual elements are employed with an exceptional intelligence and sophistication. And, true to his vision, Tihany has enriched the entire ship with an impressive array of unexpected surprises and subtle transformations for guests to continually discover and delight in --- but those, as he so wisely says, are not meant to be described, but rather to be discovered.

Civitavecchia (Rome), Italy
Originally built by Emperor Trajan who had a villa here, Civitavecchia has flourished as a major port for Rome since the 13th century. Today it is an important ferry terminal and for many travelers the gateway to the Eternal City, Rome. The Renaissance fortifications that surround the harbor area were begun by Bramante and completed by Michelangelo in 1535.

Livorno (Florence/Pisa), Italy
Livorno is the gateway to the region of Tuscany, which as Goethe once observed, looks like Italy should. Fortunately for today's visitor not much has changed in the two centuries since the German poet was himself a tourist in Toscana. The remarkable wealth of beauty here mellowed to a golden patina by history and tempered by the hand of man, awaits. Everywhere there is history, from the Etruscan stronghold of Fiesole, to the Roman colony of Volterra to the Renaissance splendor of Florence, Pisa, Sienna and San Gimignano. If the landscape evokes a sense of the familiar it is because the great masters have used it as a backdrop for their great works. Michelangelo and Leonardo da Vinci were archtypal Tuscans and Renaissance men who headed an extensive list of geniuses who lived, worked and created within a single period of time.

Portofino, Italy
Portofino is a charming, popular resort village on the Italian Riviera, a favorite with artists and seasoned travelers. Situated on a beautiful bay, the surrounding mountains covered with dense vegetation of olive and cypress trees, form a unique setting of incomparable beauty. The ship will anchor in the bay and tenders will transport you to this tiny resort village, which is closed to vehicle traffic. Everything is concentrated around a small square offering an opportunity to stroll around on foot, shop, or just relax at one of the many open-air cafes.

Bandol, France
There is a reason this town is called the ville tranquille in French. Bandol is tucked into a sheltered bay around the corner from busy Marseille, and possesses a quiet charm that is a blessing on the Cote d’Azur. Its beachy side, along the Anse de Renecros, is the ticket for a swim or relaxation. Shoppers can browse the designer shops along the quai de Charles De Gaulle. Take in the morning market in Place de la Liberte. Or, for a special treat, take the seven-minute boat ride to the Ile de Bendor just offshore, a car-free enclave purchased in the 1950s by the Ricard family of pastis fame. Ogle the huge bottle collection at the Exposition des Vins et Spiritueux. Then sample some of the famous red and rose wines of the Bandol appellation, perhaps those grown on nearby Embiez.

Palamos, Spain
Located at the foot of the mountains on Spain's rugged Costa Brava, Palamos boasts seven superb beaches, Iberian archeological remains from the year 6 BC, and the Church of Sant Esteve on the beach. Highlighting the town center is its 16th-century cathedral.

Barcelona, Spain
Barcelona, the capital of Catalonia, is said to have been founded by the Phoenicians, and was once the rival of the powerful states of Venice and Genoa for control of the Mediterranean trade. Today, it is Spain's second largest city and has long rivaled, even surpassed Madrid in industry and commerce. The medieval atmosphere of the Gothic Quarter and the elegant boulevards combine to make the city one of Europe's most beautiful. Barcelona's active cultural life and heritage brought forth such greats as the architect Antonio Gaudi, the painter Joan Miro, and Pablo Picasso, who spent his formative years here. Other famous native Catalan artists include cellist Pau Casals, surrealist Salvador Dali, and opera singers Montserrat Caballe and Josep Carreras. Barcelona accomplished a long-cherished goal with the opportunity to host the Olympics in 1992. This big event prompted a massive building program and created a focal point of the world's attention.