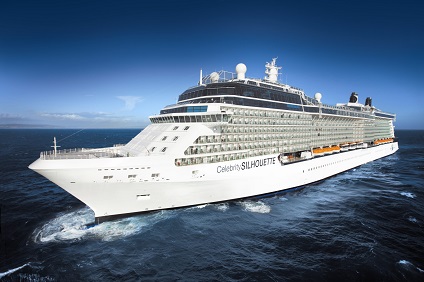 The Celebrity Silhouette® is impressive, with chic upgrades to the iconic Lawn Club we've provided more space to relax, and socialize in the fresh sea air, plus the Lawn Club Grill offers an interactive outdoor grilling experience. After a day of adventure unwind in your own cabana-styled haven at The Alcoves. Inside, embark on a culinary adventure at Qsine® where food and wine are ordered from an iPad® menu. 85% of the ship's luxurious staterooms are enhanced by sweeping veranda views. We've created an extraordinary vacation experience. Again.

Southampton, England
Southampton, England- Southampton is a bustling port city bursting with history, as well as shopping opportunities, great restaurants, and superb pubs. Located on England’s southern coast, the area has a deep connection with WWII, having been used as a staging area for the attack on D-Day. It’s also well-known to be the home port of the Queen Mary 2. Today, the city is largely defined by its universities and retail shopping. The real sightseeing, however, happens when you use this port as a jumping off point for attractions found outside, yet relatively close to the city. For instance, London is but a little over an hour away by train. You can also take a ferry to the Isle of Wight, an English holiday favorite with 25 miles of coastline, sand dunes and dramatic white cliffs. While on your Southampton cruise you can also visit the nearby, quaint town of Windsor where you can visit the many boutiques of High Street or enjoy a tour of historic Windsor Castle.

Oslo, Norway
Sail across the Oslo Fjord and you sail back in time to 1050 A.D. This capital city’s lavish history can be uncovered at the Viking Ship Museum and the Kon-Tiki Museum. Cross the drawbridge to the formerly impenetrable Akershus Castle and meander through the famous Vigeland Sculpture Park before returning to the present day.

Copenhagen, Denmark
Whether strolling through blooming flowers in Tivoli Gardens, witnessing the changing of the guard at Amalienborg Palace, or touring Kronborg Castle—the setting of Shakespeare's Hamlet—it's easy to see why Copenhagen grew to become the capital of Denmark. And, if you believe all the survey reports about this cheerful city, not only will you find yourself in one of the most cosmopolitan Nordic capitals on this Copenhagen cruise, but you’ll be elbow to elbow with some of the happiest locals on Earth.

With picturesque townhouses splashed in more color than a box of crayons, this delightful Dutch destination has a real flair for design. As you amble through the streets of Copenhagen you may begin to experience ‘hygge’-- a concept of gentle, soothing coziness, and comfort that’s infused in the lifestyle and culture. The quaint cobblestone streets, scenic landscapes, and charming cafes will attest to the country’s dedication to this concept of welcoming warmth and kindness. Relax on a short boat ride down its waterways passed scenic landmarks old and new. And, depending on the time of year, you may just catch many of the exhibits and works of art on public display in the city parks, gardens, and zoos.

Helsinki, Finland
Occupying a peninsula and several islands, this capital city's stunning structures surround some of the most spectacular bays you could ever hope to find. Stroll down broad, tree-lined streets, or take in the amazing neo-classically designed architecture in Senate Square.

St. Petersburg, Russia
Although reportedly built to resemble such Western cities as London, Paris, and Vienna, one look at St. Petersburg's regal palaces and vast public squares is enough to tell you that it is truly in a class of its own. This grand city has always been entrenched and largely defined by its proximity to water. The Neva River snakes and bisects this city at every turn, necessitating the building of some 342 bridges to navigate pedestrian, motorist and boat traffic.

Dubbed ‘The Venice of Russia’, there’s a wealth of history and culture to experience on a cruise to St. Petersburg, Russia. As a central location for the world’s greatest works of art, St. Petersburg has few rivals. The Russian Museum, where the city’s greatest works are housed, is a must visit as it spreads out over 4 lavish palaces still intact from its Tsarist past.

Peter the Great, of whom the city gets its namesake, sought to make St. Petersburg the imperial seat of Russia and a showcase city built largely by the best European architects that money could buy and his vision is still very much preserved throughout every inch of this memorable city. If you’re in St. Petersburg in June, you’ll be able to catch the city's famous "white nights," when the boundless night sky is never completely dark.

Tallinn, Estonia
Tallinn has remained remarkably unchanged since its founding in 1154 A.D. The preservation of this city’s old world charm enables visitors to enjoy architectural marvels of centuries past, such as the soaring towers of Toompea Castle and the exquisite Russian Orthodox Cathedral. The exception is the delightfully modern pink Parliament building, visible from Palace Square. With a boisterous nightlife, Tallinn stands as one of the most exciting cities of the former Soviet Union. Here, ancient church spires and baroque architecture intermingle with modern glass buildings that echo the many influences and cultures that have left their imprint throughout the centuries. There are so many amazing sites to explore on your Tallinn cruise. Visit the imaginative Estonian Open-Air Museum, where ancient structures are arranged among the trees complete with actors in period garb. People watching doesn’t get much better than what you’ll find in Town Hall Square and if it’s animals you’d rather observe, visit the Tallinn Zoo where over 350 different species are housed.

Berlin (Warnemunde), German
The district of Warnemunde in Rostock sits at the mouth of Warnow River which flows into the Baltic Sea. This charming seaside town is just about three hours north of Berlin and serves as the perfect access point to the capital city. Berlin shines with a free spirit, mystique and a penchant for good times. Once a city divided, Berlin is now united, bringing together cultures and languages from throughout the world. There’s so much to discover on a Berlin cruise. Berlin literally rose from the ashes to become one of the most alluring cities in the world. Visit the UNESCO world heritage site, Museumsinsel (or Museum Island) in the city center. This wonderful group of museum buildings together hold around 6000 years of art and cultural history. Stand at the famous Checkpoint Charlie and walk along the remnants of the Berlin Wall. Enjoy the rollicking beer gardens, fabulous restaurants, incredible music and fascinating arts scene all wrapped in a laid-back sensibility.