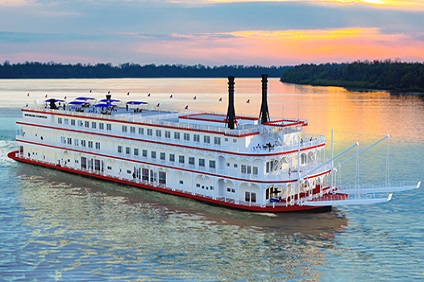 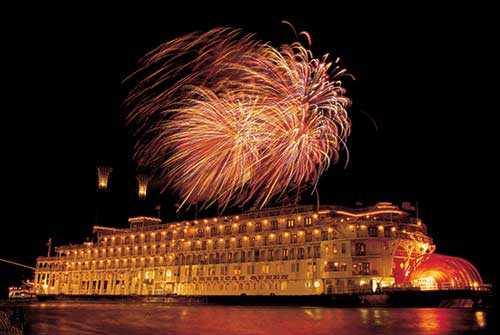 7 Night Cruise sailing from Memphis to Alton aboard American Countess.

7 Night Cruise sailing from Memphis to Alton aboard American Countess.

Day 2: Leisurely River Cruising
There is always plenty to do between dawn and dusk on the river and today is the perfect day to enjoy the many public spaces and activities that are available to you onboard. Gaze at the beautiful landscapes and small river towns as you mingle with fellow guests and discuss the unique aspects of river life. If you fancy a moment for yourself, retreat to The Library adorned with bookcases stocked with an imaginative selection. Take hold of a literary classic, curl up on a plush chair in a cozy corner and relish every moment of serenity. Our fitness facility, Card Room and Grand Lobby offer a more stimulating day on the river for those who wish to indulge in more energy-infused activity. However you wish to spend your day, make it your own and revel in every moment.

Day 3: New Madrid, MO
New Madrid was founded in 1776 by Spanish Governor Esteban Rodríguez Miró who welcomed Anglo-Saxon settlers but required them to become citizens of Spain and live under the guidance of his appointed impresario, Revolutionary War veteran, Colonel William Morgan of New Jersey. Some 2,000 settled in the region. In 1800, Spain traded the territory to France in the Third Treaty of San Ildefonso, who promptly sold it to the United States in the Louisiana Purchase. The city is remembered as being the nearby location for the Mississippi River military engagement, the Battle of Island Number Ten, during the Civil War. The city is famous for being the site of a series of over 1,000 earthquakes in 1811 and 1812, caused by what is called the New Madrid Seismic Zone. Today, explore this quaint river town that will surely steal the hearts of all guests.

Day 4: Paducah, KY
Paducah embraces their harmonious history between the European settlers and the Padoucca Indians native to the area. The city is located at the confluence of the Ohio and the Tennessee Rivers and because of this, it is often called the Four-Rivers Area due to the proximity of the Ohio, Cumberland, Tennessee, and Mississippi Rivers. This prime location has played a major role in Paducah’s history, as transportation was easily accessible – the economy was strong and travelers were frequent!

Day 5: Cape Girardeau, MO
Nestled along the western banks of the mighty Mississippi River lays the city of Cape Girardeau, Missouri. It’s a community rich in history and heritage. For more than 250 years, people have been drawn to Cape Girardeau and the river on which it lies. Stroll along the riverfront, where the passion that led Mark Twain to write so eloquently about Cape Girardeau in Life on the Mississippi, the inspiration that Gen. Ulysses S. Grant used to lead with firm conviction as he took command of the Union Army in the historic downtown, and the warmth and hospitality that community founder Louis Lorimier extended to Lewis and Clark while on the journey of a lifetime as they set forth on their Corps of Discovery to explore the Louisiana Purchase will be prominent.

Day 6: Chester, IL
Known as the “Home of Popeye”, Chester, Illinois is a city rich in history and pop culture. Because creator and writer of Popeye, Elzie Crisler Segar, was born here, the famous characters starred in the show will be seen showcased frequently throughout the town. Stop at the Popeye Character Trail to view granite statues of the characters overlooking the Mississippi or check out America’s only Popeye museum and gift shop to take home a souvenir to remind you of your visit to Chester! Spend the day exploring the unique history as you walk through luxurious homes, historical buildings, and museums!

Day 7: St. Louis, MO
St. Louis, Missouri, famously referred to as the “Gateway City,” is known for its diverse neighborhoods and the different cultures and traditions each one brings forth. The iconic city was founded in 1764 by French explorers who settled on the east side of the Mississippi, claiming the land as their fur trading post. In 1803, the city’s name began to spread as the beginning point for the famous Louis and Clark Expedition. The city is typically associated with its 630-foot stainless steel monument, the Gateway Arch, which stands proud on the banks of the Mississippi River to symbolize the westward expansion of the United States.

Day 8: Alton, IL (St. Louis, MO)
In its early days, Alton was a bustling river town, much larger than Chicago. Alton was built on industry - flour mills, quarries, brick making, pottery making - and relied on the Mississippi River. The “Steamboat Era” played an important role of the growth of Alton, and riverboat traffic can still be seen from the riverfront up and down the mighty Mississippi River.