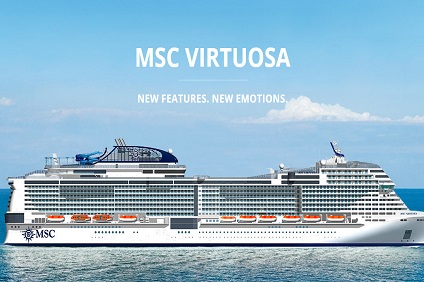 MSC Virtuosa’s namesake comes from the word virtuoso, meaning someone highly skilled in music. Each deck will, in fact, be named after a different musical instrument. This new cruise ship will be one of the two largest in MSC Cruises’ fleet, along with her sister ship MSC Grandiosa. One of the highlights of MSC Virtuosa’s onboard entertainment will be the two brand new Cirque du Soleil at Sea shows, created exclusively for MSC Cruises’ guests.

Civitavecchia (Rome), Italy
Discover the culture and colour of Civitavecchia, an MSC Mediterranean Cruises destination. This Italian gem is an enjoyable flight from many European and non-European cities. Celebrated for its 16th-century Michelangelo Fort, ancient Taurine Baths, and marble Vanvitelli fountain, the port is a convenient starting point for visiting Rome, Italy’s regal and romantic capital. Not far from Civitavecchia lies Rome, one of the world’s most distinguished cities. Be entranced by its many architectural wonders including the famous Colosseum. An ancient amphitheatre in the centre of the capital, built between 70 and 80 AD, this UNESCO World Heritage Site was commissioned by Roman Emperor Vespasian to entertain more than 50,000 people! On this MSC Cruises excursion, you’ll take a peek inside the arena, imagining the gladiator fights and mock sea-battles that took place at its centre. Then, visit the Roman Forum and the Palatine Hill, a short walk from the amphitheatre. The Trevi Fountain is an icon of Rome, a Baroque beauty uniting architecture, sculpture, rocks, and water. Admire the spectacle on an MSC Cruises excursion and see this 18th-cenury landmark close-up. Showcasing mythological figures, including Triton on a shell-shaped chariot, the Trevi Fountain is an Italian masterwork. This landmark structure has featured in films such as La Dolce Vita and Roman Holiday. A journey to Rome isn’t complete without a visit to Vatican City, located in the heart of the Italian Capital. Pick an MSC Cruises excursion to see St. Peter's Square, St. Peter's Basilica, the Vatican Museums, and the Sistine Chapel. If you arrive in Rome on a Sunday, you’ll be able to attend the Pope's noon Angelus Prayer. Or enjoy a guided tour of the Vatican Museums which houses works by Da Vinci, Caravaggio, van Gogh, Dali, Picasso, and Gaugin.

Genoa, Italy
Genoa is a city and a seaport in northern Italy, the capital of the Province of Genoa and of the region of Liguria.Famous as the birthplace of Christopher Columbus, Genoa remains a bustling seaport. The city's Renaissance heritage is preserved in splendid palaces overlooking the harbor. The Old Quarter of Genoa, is especially enthralling for those who like to explore. It is best to travel on foot through the narrow streets (called carruggi) which are meticulously kept, as are the expansive palazzi (mansions) of medieval merchants which line them. Around the Palazzo Reale, many shops sell Turkish carpets and the best of silk. Other attractions in Genoa include the Palazzo Ducale now used for exhibitions and concerts, the Via Garibaldi art gallery and the original waterfront or Porto Antico. The waterfront is also full of atmosphere and there are many bars and restaurants where one can watch the world go by. The 16th century lighthouse, the Lanterna, which rises over 120 meters (325 steps!) above the sea, can be seen 50 kilometers away, and has guided mariners to the port for 100s of years.

Valletta, Malta
Valletta and its suburb town of Floriana are perched on the steep Sciberras peninsula jutting out into Malta's two deep natural harbours, Grand Harbour and Marsamxett Harbour. Valletta is the Islands' fortress city. Founded by the Knights of St John in 1566, it is known as the 'city built by gentlemen for gentlemen' ; a 16th century architectural masterpiece. Valletta is very much a working, capital city; a bustling cultural centre and the administrative and commercial heart of the Islands. Walking around Valletta, you'll come across an amazing number of historical sites, squares, courtyards, gardens and any number of cafés to visit. The city is a delight to shop in: narrow side streets are full of tiny shops selling antiques, maps, books, prints and jewellery.

Barcelona, Spain
Barcelona is the second largest city in Spain and the capital of Catalonia. It is located on the shores of the Mediterranean and enjoys a mild climate all year round.Barcelona is one of Europe’s largest and most successful ports and one of the world’s leading cities in art and architecture. From the modern cruise terminal at the docks you will need a taxi or tour to see the artistic beauty of this unique destination, credited to the talents of Joan Miro, Pablo Picasso, Antonio Gaudi, Jose Clara and others. Stroll the mosaic-paved Ramblas, the city's social hub, with open-air cafes, street entertainers and flower displays. See its unique Catalonian cultural heritage in the ancient Gothic Quarter, the surrealistic architecture of Antonio Gaudi and some outstanding museums. Sights of interest include the Columbus Monument, the Cathedral of Santa Eulalia (1298 to 1454), the Maritime Museum, Picasso Gallery, La Sagrada Familia (Gaudi's unfinished cathedral), Palau Guell (Gaudi mansion) and the Olympic stadiums.