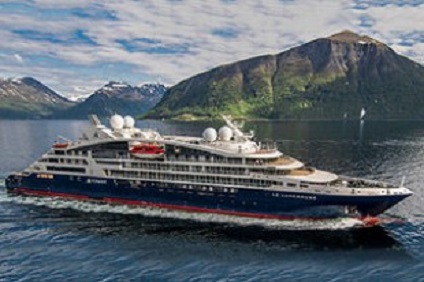 16 Night cruise departing from Cairns to Darwin onboard Le Laperouse.

16 Night cruise departing from Cairns to Darwin onboard Le Laperouse.

Join Sarina Bratton AM, Asia Pacific Chairman, for an extraordinary adventure along the north coast of the island of New Guinea. A brand-new 17-day expedition cruise brimming with cultural encounters and spectacular landscapes from Cairns to Darwin aboard Le Lapérouse.

Setting sail for Papua New Guinea, the world’s second largest island and a fascinating land home to no fewer than 1,200 ethnic groups.

Your call at Tufi will undoubtedly be one of the highlights of your voyage. Dubbed the “Scandinavia of the Tropics”, you will be charmed by the picturesque vista of Fiords and lush mangrove forests where you will be welcomed by Papuan tribes keen to share their culture and art with you.

In the village of Kopar, situated at the mouth of the Sepik River, you will be welcomed with cultural performances and will witness life in a traditional village.

As you voyage across Western New Guinea you will experience the spectacular Cenderawasih Bay, with an unforgettable opportunity to swim with whale sharks.

Further west, spend time in the Bird’s Head Seascape at the heart of the famous Coral Triangle with some of the highest coral biodiversity on the planet.

Before disembarking in Darwin, you will experience the ‘Spice Islands’ – the Moluccas, visiting the charming Banda Neira, offering rich colonial history and a snorkelling possibility.

CAIRNS
Washed by the Coral Sea, the harbour town of Cairns is located on Australia's north-east coast. The seafront esplanade is a popular place for locals and visitors to walk, swim and picnic under the shade of swaying palm trees. The hills surrounding Cairns form the gateway to the Queensland Rainforests, proclaimed a UNESCO World Heritage site for their fauna and flora from the Gondwana era.

ALOTAU
Alotau became the provincial capital of Milne Bay in 1969 and today has a population of approximately 16,000. It serves as our port of entry into Papua New Guinea. Missionaries, miners, pearlers, Japanese and American warships have all contributed to the History of Milne Bay. Perhaps the most significant history surrounds the Battle of Milne Bay. It was here that the invading Japanese army suffered their first land defeat in the Pacific War in 1942. A memorial park at the battle site commemorates the event. The local people are warm and welcoming resulting in one of the most relaxed, secure and easy-going towns in Papua New Guinea. Join your expedition team for a tour taking in the town markets and WWII memorials.

TUFI
Often described as the “Scandinavia of the tropics”. The spectacular Tufi “fiords” plunge over 90 metres deep and rise over 150 metres vertically above the water making for a spectacular backdrop. The traditional way of life plays an important role amongst the villagers with many living in isolated areas along the coast of Cape Nelson and on the slopes of Mount Trafalgar. The area is known for its production of tapa cloth, made from the bark of the paper mulberry tree and skilfully decorated. Guests will travel into the ancient mangrove forests of the Fiords to witness one of the most colourful traditional performances in all of Papua New Guinea. There is also the opportunity to swim and snorkel in the clear waters of Kamoa Beach.

TAMI ISLAND
The Tami Islands (Kalal, Wanam & Idjan) are a small group of uplifted coral atolls, with two main villages on the two larger islands and many smaller reefs and cays. In the centre is a beautiful, crystal clear blue lagoon with abundant marine life and stunning coral formations. The islands, located in Morobe Province not far from the town of Finschaffen are seldom-visited. Tami Islanders are renowned artisans and are most famous for their intricately decorated bowls.

MADANG
Madang Township was once known as the "prettiest town in the South Pacific". Its peninsula setting is a show-place of parks, waterways, luxuriant shade trees and sparkling tropical islands. The diverse geographical nature of Madang province is reflected in the 170 different languages that are spoken. This diversity is showcased in the Madang festival with its colourful displays of “sing sings” performed by numerous cultural groups from across the Madang Province. Join your expedition team for a tour to the local village of BilBil, famous for the production of clay pots. You will also be treated to a number of cultural performances showcasing the local customs, costume and dance of the coastal, midland and highland communities.

KOPAR
The people of the Sepik region speak more than 250 languages and are knitted together in systems of trade and cultural interaction. Kopar village’s location at the mouth of the Sepik river makes it an important trading point for surrounding villages. Here the crocodile is worshiped as the water spirit. As is custom in all Sepik societies, the men's house is the place where important decisions regarding the village are made, where boys are initiated and become men and ceremonies to please the spirits are performed. Guests will be welcomed ashore with a ceremony and cultural performance, including the famous “dragon dance.” There will be an opportunity to walk around the village of Kopar to experience traditional life in the lower Sepik.

JAYAPURA, PAPUA
Jayapura City is the provincial capital of Papua province, Indonesia. It is a modern industrial city contrasting markedly with the surrounding hinterland where Papuan tribes live a subsistence lifestyle. The vast majority of Jayapurans are transmigrants from western Indonesia who control most of the industry and economics of the region. Guests have the opportunity to visit the Loka Budaya Museum with its vast collection of Papuan artefacts before leaving the city behind, and travelling to the traditional village of Asai on Lake Sentani. Here you can enjoy a cultural performance and witness life in a traditional Papuan village. Asai is famous for its production of Tapa cloth.

CENDERAWASIH BAY
Cenderawasih Bay is located at the western end of New Guinea Island, south-east of the Bird's Head Peninsula. Covering more than 1.4 million hectares the bay is home to an abundant array of uninhabited islands, pristine coral reefs and the world’s largest fish, the Whale Shark. Over the years the whale sharks have learnt the habits of local fishermen who catch baitfish at night in nets lowered from fishing vessels known as "Bagans”. The Whale Sharks are now regular visitors feeding on the baitfish that spill from the nets at the surface. Cenderawasih Bay is part of the Bird’s Head seascape, the centre of marine biodiversity at the heart of the coral triangle. There are also the remains of World War II shipwrecks and aircraft in the bay.

BIRD'S HEAD SEASCAPE
Situated off the northwest tip of the Bird's Head Peninsula on New Guinea Island, The Bird’s Head seascape, comprises over 2,500 small islands, cays, and reefs. These islets are a picture postcard setting with their white sand beaches and rainforest-topped Karst islands sprouting like mushrooms from a turquoise sea. They are also famous for their exceptional sea fauna. According to Conservation International, the diversity of marine life is greater than any other area sampled in The Coral Triangle, making the region home to the richest coral reef ecosystems in the world. Your ship will spend some time in the region to take advantage of the multitude of in – water experiences that await.

BANDA NEIRA, MALUKU ISLANDS
From age-old traditional cultures and ancient vestiges, to coral reefs and lush green jungle… The attractions of the remote Banda archipelago seem endless. Better known as the legendary “Spice Islands” of the Ancient World, these small volcanic landmasses were the fabled prize of colonial powers for more than four centuries. Every colonial power of significance fought for control of these ten small islands that today have become largely forgotten. Walking the streets of Banda Neira is a surreal experience as your eyes are drawn to the eclectic mix of Portuguese, Dutch and British architecture, the remnants of a rich and tumultuous history. It is without doubt the most historically significant and interesting of all the “Spice Islands”.

DARWIN
Darwin is located in Australia’s Northern Territory which is also known as the “Top End”. It is the capital city and the most populated town of the Northern Territory. Darwin is a beautiful tropical city, a melting pot of people and cultures, over 50 different cultures live and work side by side that prides itself in its unique and friendly laid-back lifestyle. Discover the new Parliamant House opened in 1994, a magnificent example of tropical architecture and Admiralty House declared heritage place, a tropical-style home elevated on stilts that has survived two cyclones and numerous air raids. You will also enjoy the bustling waterfront on the Timor Sea.