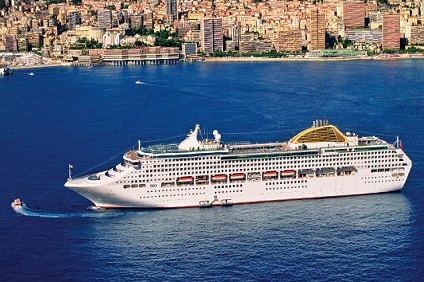 Discover the Mediterranean’s fascinating diversity
From cosmopolitan Cannes and elegant Valletta, to picturesque Santorini and historic Florence (tours from Livorno), you can see so many sides of the magical Med on this summer escape.

Athens, Greece
The Acropolis - 'High City' - will always be the top attraction from Athens cruise port Piraeus. With its 2,500-year-old Parthenon, temple to Poseidon and Athena, Odeon of Herodes Atticus and Theatre of Dionysus, it quite literally stands out as an oasis of calm in the frenetic Greek capital.

As part of the major revamp the city had for the 2004 Olympics, 400 modern buildings were cleared from the ancient meeting place next to the Acropolis, the Agora, which was then restored and linked by walkways to the Acropolis, Hadrians Arch, the Academy of Plato and the Monastery of Daphne.

Other nearby ancient sites include the Roman Tower of the Winds and the Hill of the Muses where Socrates is said to have drunk hemlock. Below the Acropolis is the fun place to shop or barter, eat moussaka or Greek salad, drink wine or ouzo and, of course, to people-watch: the 3,000-year-old Plaka.

Santorini, Greece
When you arrive by sea, there is no confusing the island of Santorini. Dazzling white houses cling to the edge of vertical, rocky cliffs against azure blue waters. The most southern of the Cyclades islands, it is surrounded by Thirasia and Aspronisi, which were once part of a large volcanic island. Considered by many to be the site of the "Lost City of Atlantis", this magical little island glimmers from the fading sun as many watch its decent from the numerous bars and cafés at the water's edge.

Heraklion, Greece
The proud city of Heraklion is the modern capital of Crete, largest and most ruggedly beautiful of the Greek Isles.Just along the coast, you'll find the scrupulously renovated remains of Knossos, the Palace of King Minos and the island's capital under the Minoans. Here, the endless maze of salons, staircases and courtyards gave rise to the legend of the Labyrinth, housing the evil Minotaur at its heart. See the legend come vividly to life!

Rhodes, Greece
You will feel as though you have stepped back in time when you cruise right up to Rhodes' magnificent walled Old Town - the largest inhabited medieval town in the whole of Europe. This magnificent place has made the island the most popular tourist destination in the Dodecanese. 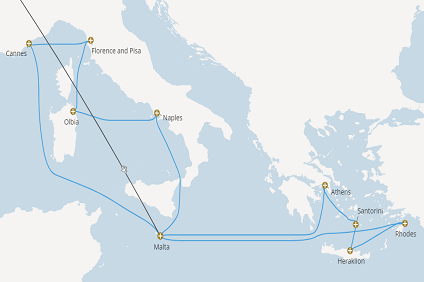