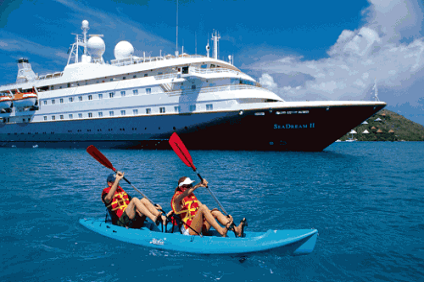 San Juan
San Juan, founded in the 1520’s by Spanish settlers, is both the largest city and the capital city of Puerto Rico. A territory of the Unites States, Puerto Rico is comprised of the large main island as well as five smaller islands, including the popular islands of Vieques and Culebra (both ports of call on select SeaDream voyages). SeaDream docks in Old San Juan, the oldest part of the city. Parts of this historic port city are still surrounded by stone walls dating back to the 1500’s. Narrow cobblestone streets, small shops, and points of interest like Cathedral of San Juan Bautista make this charming city a great place to stroll. Guests sailing into or departing from San Juan will enjoy views of Castillo de San Felipe del Morro, a mid- 1700’s Spanish fortress. San Juan Luiz Munoz Marin Airport is approximately a 30-minute drive to the port in Old San Juan. Currency in Puerto Rico is USD.

Honeymoon Beach, Water Island
Water Island is a very small island located just of Crown Bay St Thomas within the United States Virgin Islands group. The main attractions on this gem are the beautiful beaches, Honeymoon Beach is the most popular. Guests can also visit the plantation ruins and Fort Segarra, an underground fort partially constructed by the U.S. during World War II. For the certified divers scuba diving at Supermarket Reef in Limestone Bay is fantastic. SeaDream anchors off Water Island and offers service directly to Honeymoon Beach.

Cruz Bay, St John
Two-thirds of St. John Island has been dedicated as a national park and is the most virgin of the U.S. Virgin Islands. It is blessed with many beautiful beaches and bays, fine anchorages and verdant hills. Enjoy the day with snorkeling trip to Trunk Bay with its underwater guided trail, or join our kayaking land adventure. Ask your Club Director for a guided hike to Caneel Bay stopping at beautiful Honeymoon Beach for a quite swim. Rental Cars are available should you want to explore on your own or you could borrow a SeaDream Mountain Bike for independent exploration.

Sandy Ground
This British Overseas Territory is becoming more popular due to the incredible resort options as well as world recognized beaches and amazing golf. SeaDream offers an opportunity to tee off, swim with dolphins or for the energetic, bike around the island with the Captain or Club Director. Naturally, we will also offer water sports while we are anchored off Sandy Ground.

Marigot
Marigot is the main town and capital on the French side of Saint Martin. The city of Marigot is perhaps the most French in spirit of all the cities in the Caribbean. Colonial houses stand beside cafés and bistros, pastry shops and luxury boutiques, and in many ways, it looks just like any of the French market towns you might expect to find in Europe. At the southern end of town by the harbor is Marina Port la Royale. This area includes elegant stores with the latest in European designer fashion and fine jewelry, all duty and tax-free. The entire city is only four streets wide, so it is very easy to get around. Marigot was named the capital during the reign of King Louis XVI, who built Fort St. Louis on a hill near Marigot Bay. Today, that building is the most important in the city. SeaDream anchors off Marigot and offers several yachting land adventures as well as the possibility to play with the toys at the marina.

Saba
This Caribbean paradise is a special municipality of the Netherlands. Due to this fact, Saba is actually the location of the tallest, or highest point/elevation of the Netherlands, even though it is a few thousand miles away from its European homeland. With an estimated local population of just over 2,000 people, Saba is now primarily supported by tourism, and is known for a concentration on “eco-tourism”. This includes diving, hiking, and climbing its mountainous terrain. The island is so small that there is only 1 main road, and its airport is well-known for having one of the shortest commercial runways in the world. The island’s intimate size, picturesque Red rooftops and lush vegetation make it a perfect port to call on during your special Caribbean yachting vacation.

Gustavia
Perhaps our most treasured destination in the Caribbean! This small island belonging to the French West Indies has so much to offer our SeaDream guests. Incredible shopping only steps away from the pier. Incredible beaches, resorts, restaurants and activities both day and night. SeaDream has created various land adventures for you to discover the island from sea or land. Ask one of the officers to take you on a hike or bike ride around the island. Another great activity here is to simply relax and watch all of the incredible yachts arriving and departing just off your SeaDream yacht.

Soper's Hole, Tortola
This marina on Tortola's West End retained its quaint charm while being a center of activity and voted the best marina in the BVIs. Soper's Hole imparts a great sense of place and physical intimacy and is considered one of the most picturesque marinas in the Caribbean. SeaDream is offering several land adventures including, snorkeling, scuba diving, land rover safari and swimming with the dolphins. For guests wanting some extra activity, ask the Captain or Club Director to set up a bike ride to Road Town along the coastal road. For guests wanting to simply shop or explore the marina, we suggest checking out Pusser’s Landing along with the cute boutiques.

Norman Island
Norman Island is located at the southern tip of the British Virgin Islands. It could very well be the very same island reputed to be the inspiration for Robert Louis Stevenson's pirate novel Treasure Island. It is said that the island was named after a pirate who purchased it at some point during the early 18th century. The island is uninhabited and privately owned by Dr Henry Jarecki. Its area is about 600 acres (2.4 km²), and it is about 2.5 miles (4 km) long. A large harbor is known as "The Bight" offers one of the most protected anchorages in the area. Guests will enjoy some great hiking opportunities as well as snorkeling and scuba diving. Another attractive option may be to check out the Willie T that is generally anchored in the harbor or simply have a beverage at the Pirates Bight Bar.

White Bay, Jost van Dkye
The BVI’s barefoot island and home of the "Painkiller" drink. Population depends on the month – typically 250-300. This is another SeaDream destination where you may be served Champagne and Caviar in the surf followed by a beach barbecue lunch. A hike is always offered to guests to visit the famous Foxy’s Bar at Great Harbour (hopefully, the boutique is open) or you can stroll a few meters down the beach to the Soggy Dollar Bar. Snorkeling equipment is provided as well as some of our water toys!