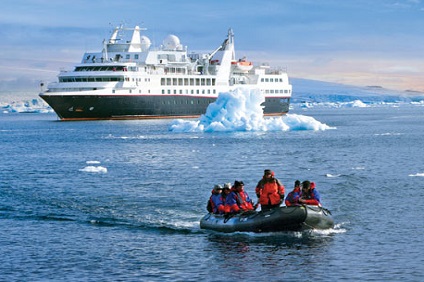 13 Night Cruise sailing from Reykjavik to Halifax aboard Silver Explorer.

13 Night Cruise sailing from Reykjavik to Halifax aboard Silver Explorer.

Lined with picturesque fishing villages, dramatic fjords and mountains, and sweeping sea vistas framed by a rocky coastline, the route of the Norse is exceptional. Experience the beauty of the fjords, the majesty of the marine wildlife not to mention the incomparable scenery and learn a life lesson provided by Mother Nature. Zodiac trips and expert leaders make this voyage a fully immersive experience.

Reykjavik
Sprawling Reykjavík, the nation's nerve center and government seat, is home to half the island's population. On a bay overlooked by proud Mt. Esja (pronounced eh-shyuh), with its ever-changing hues, Reykjavík presents a colorful sight, its concrete houses painted in light colors and topped by vibrant red, blue, and green roofs. In contrast to the almost treeless countryside, Reykjavík has many tall, native birches, rowans, and willows, as well as imported aspen, pines, and spruces.Reykjavík's name comes from the Icelandic words for smoke, reykur, and bay, vík.

Skjoldungen
Located on Greenland’s relatively rarely visited rugged east coast, Skoldungen Fjord has enchanting scenery with towering mountains tipped with snow, ice-scraped valley sides and sculptured icebergs in shades of white and blue. At the top of the fjord one can easily see the retreating state of the Thrym Glacier. The U-shaped fjord offers spectacular scenery and as an extra perk, it is not uncommon to see whales in the fjord.

Nanortalik
Nanortalik lies in a scenic area surrounded by steep mountainsides and is Greenland’s tenth-largest and most southerly town with less than 1500 inhabitants. The town’s name means the “place of polar bears”, which refers to the polar bears that used to be seen floating offshore on summer’s ice floes. Nanortalik has an excellent open-air museum that gives a broad picture of the region from Inuit times to today. Part of the exhibition is a summer hunting camp, where Inuit in traditional clothing describe aspects of their ancestor’s customs and lifestyle.

Qaqortoq
The largest town in southern Greenland, Qaqortoq has been inhabited since prehistoric times. Upon arrival in this charming southern Greenland enclave, it's easy to see why. Qaqortoq rises quite steeply over the fjord system around the city, offering breath-taking panoramic vistas of the surrounding mountains, deep, blue sea, Lake Tasersuag, icebergs in the bay, and pastoral backcountry.

Louisbourg
Louisbourg, Nova Scotia, is a thriving seaport located on the eastern tip of Cape Breton Island. French settlers first arrived in Louisbourg in 1713, using the island as a base for their lucrative cod fishery. Soon, the town became one of the busiest harbours in North America and an important trading outpost and military hub. They named it Louisbourg, in honour of King Louis XIV. The fortress was built to defend against the threat of a British invasion. After two major attacks, the fortress was destroyed in the 1760’s.

Halifax
Surrounded by natural treasures and glorious seascapes, Halifax is an attractive and vibrant hub with noteworthy historic and modern architecture, great dining and shopping, and a lively nightlife and festival scene. The old city manages to feel both hip and historic. Previous generations had the foresight to preserve the cultural and architectural integrity of the city, yet students from five local universities keep it lively and current. 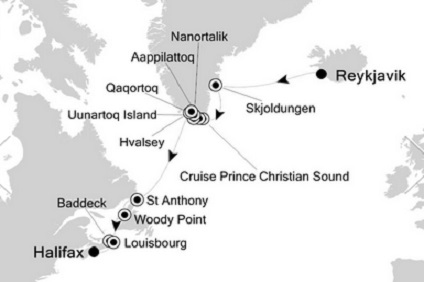 BONUS SAVINGS 2020 TERMS AND CONDITIONS ^Prices listed are based on Early Booking Bonus fares and are cruise-only per guest unless otherwise noted, based on double-occupancy and are correct at time of printing. Availability of all suite categories cannot be guaranteed. Fares for single guests are available upon request. Additional restrictions may apply. *Bonus Savings offer amounts are per suite based on twin share maximum savings and single occupancy bookings will only be eligible for half of the displayed amount, offer is valid on new, individual bookings made between 4 January, 2020 and 28 February, 2020. Guest benefits from an extra savings per suite, valid on all categories, on select cruises 2020 and 2021. Guest is eligible for up to AU$500 savings per suite with a maximum of AU$1,000 savings per suite. Savings amount varies by voyage. Savings applied to cruise fare at checkout. Cancel and re-books do not qualify. Single supplements will apply and vary by voyage. Offer is combinable with Air offers, Venetian Society and Early Booking Bonus promotional offers. Combo Voyages are for the offer only on qualifying segments. The Offer may not be combinable with dedicated deals or any other offer, promotion or price code unless otherwise specified. Offer is subject to availability; capacity controlled and may be withdrawn at any time without notice. 10% Early Booking Bonus Offer valid on new, individual bookings made between 4 January 2020 and 28 February 2020 on voyages departing from 1 July 2020 onwards. Guests will receive 10% savings on the Silver Privilege fare for select voyages if full payment is received no later than 28 February 2020; full payment includes the cruise fare and any outstanding balances on the booking (air, hotels, transfers and land programs). Offer not valid for Full World Cruise. Bookings made before or after the promotional period will not qualify for the savings. Other restrictions apply. Please refer to www.silversea.com/terms-and-conditions for full terms and conditions of the following programs: Mediterranean Air Offer, Northern Europe Air Offer, Australia and New Zealand Air Offer, Antarctica All-inclusive Offer, Arctic All-inclusive Offer, and Asia/Far East Air Offer. All Land Adventure fares are subject to change and are not guaranteed until payment is received in full by Silversea. All Land Adventures are non-transferable and non-refundable for any reason, within 90 days of sailing and are recommended to guests 18 years or age and older. Our local operator reserves the right to substitute other sites if local situations, including holidays and weather, require. Silversea shall have no obligation or liability of any kind to guests for the business practices, acts or omissions in connection with or arising out of arrangements with independent contractors, including but not limited to airline carriers, ground-tour operators, and hotels since they are neither agents for nor employees of Silversea Cruises. Silversea’s liability does not extend beyond the vessel. All fares, savings, offers, itineraries, and programs are subject to change without notice. Voyage highlights, excursions, and enrichment programs are subject to change and/or cancellation without prior notice. All information contained herein is accurate and in effect at the time of publication. Silversea reserves the right to correct any errors and omissions and to cancel any offered product or service in the event of such error or omission. Additional restrictions may apply.