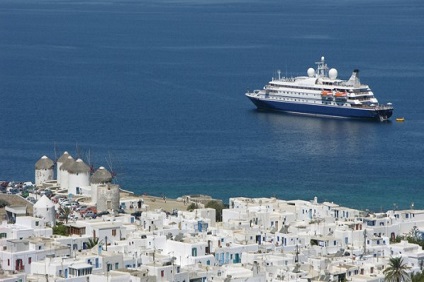 7 Night Cruise sailing from Barcelona to Malaga aboard SeaDream I.

7 Night Cruise sailing from Barcelona to Malaga aboard SeaDream I.

Let’s face it! Some vacations at sea can be boring. But a holiday with SeaDream Yacht Club is something new. Unstructured! Unexpected! A casual, free-form holiday with plenty of room for personal choice.

We are not a cruise line. Quite simply, yachting is different from cruising. Yachting has an open casual ambience. Cruising does not. Yachting provides guests the ability to fulfill their dreams at their own pace without having to stick to a rigid fixed schedule. With yachting it’s no clocks, no crowds, no lines, no stress.

Our twin mega yachts, SeaDream I and SeaDream II offer seven-day Caribbean and Mediterranean sailings. The elegant twins call at smaller yacht ports. There’s lots of water sports activity. “Water Toys” including wave runners, kayaks, snorkel gear, Sunfish and Zodiacs for water skiing. If you feel lazy you can snooze on deck in private Balinese sun beds---designed for two. Fun under the sun or indoors. And dining with SeaDream is superb whether you are in our main Dining Salon or up on deck in our Topside Restaurant. In short, the SeaDream twins offer guests the ultimate in the elegant, but, oh so casual yachting lifestyle. An intimate, friendly, comfortable, romantic yachting experience where you can always expect the unexpected.

Barcelona
Barcelona, a Unesco Awarded City, is the second largest in Spain. It was the 12th-most-visited city in the world, and 4th most visited in Europe after London, Paris, and Rome. Especially remarkable is the work of architect Antoni Gaudi, which can be seen throughout the city. His best-known work is the immense but still unfinished church of the Sagrada Familia, which has been under construction since 1882 and is still financed by private donations. Completion is planned for 2026. SeaDream almost always docks downtown at the World Trade Center and is steps away from the famous boulevard of La Rambla. SeaDream has several land adventure options for you, view voyages for the various activities to participate in.

Palma de Mallorca
Situated on the southern coast of Mallorca, the largest city in the Balearic Islands archipelago is Palma. Mallorca’s cultural and economic hub is the 12th largest urban area in all of Spain. Palma has an area of 21.4 square kilometers, housing half the population of Mallorca and despite being compared to Barcelona and Florence, it is twinned with Naples, Italy. In 1983, Palma officially became the capital of the Balearic Islands. Originally founded by General Quintus Caecilius Metellus as a Roman camp in 123 B.C.E., the island of Mallorca was a part of the Tarraconensis province of Spain. The Romans established two ports, Pollentia to the northeast and Palma in the south. Palma was utilized as a port for Africa, while Pollentia was used for Roman cities in the northwest Mediterranean. Prior to the Muslim conquest and downfall of the Western Roman Empire, existed a period where the Byzantine Empire was on Mallorca. Due to the lack of documentation, the nature of this presence is unknown, but for the 10th century to 1229 A.D., Palma was under Islamic control as “Medina Mayurqa”. When James I of Aragon captured Palma in 1229, it was given municipality as “Cuitat de Mallorca”, and maintained as the capital of the Kingdom of Majorca. Perpignan and Palma became a joint capital of the Kingdom once James I of Aragon passed away. From 1229 onward, the foundations of Mallorcan society began to flourish, although various war-like events would soon take place. In 1391 began an anti-Jewish movement that forced the Jewish people to flee, convert, or be killed – actions that would ultimately be reinforced in the Inquisition. While the Revolt of 1450 was occurring, it was farmers that were then harassed. A river that divided the city would eventually spur social and economic issues as an Upper and Lower town of the city would be established. Mallorca was on the decline by the 16th century, and became a haven for pirates by the 17th century. Finally, the War of the Spanish Succession ended and destroyed the Crown of Aragon in 1714 when Barcelona fell. The city would eventually begin to thrive again as Charles III of Spain allowed commercial activity to bounce back by removing interdiction of commerce with the Spanish colonies in America. Once Algeria became occupied by France, fear of Maghredi attacks were eliminated, allowing further economic expansion with new maritime routes surfacing. Since 1950, Mallorca has become a prime tourist destination, growing from 600,000 visitors in 1960 to 19.2 million visitors by 2001. Tourists can view the old city, Arab baths, Palma Cathedral, Bellver Castle, or simply indulge in the beautiful Playa de S’amarador. For a glorious, picturesque scene of mountains, be sure to visit the Serra de Tramuntana and explore the UNESCO location overlooking the sea.

Ibiza
Ibiza town is the largest city on this 3rd largest Balearic Spanish Island. It lies 79 kilometers (49 miles) off the coast of Valencia, in eastern Spain. Ibiza has become famous for its incredible nightlife and the electronic music that originated on the island. This UNESCO awarded city has some great land adventure options including resort golf, wine tasting, exploring the Dalt Villa and mountain biking to name a few. We try to stay late in the evening so guests can also get a taste of the nightlife.

Puerto Banus
Puerto Banus is a very upscale marina to the west of Marbella, Spain on the Costa del Sol. It was built in 1970 by Jose Banus, a local property developer, as a luxury marina and shopping complex for the jet-set. The focal point of Puerto Banus is the marina. It is also a scene for many exotic cars that are owned by international celebrities and wealthy owners that also own large mega yachts. Our local agent tells us that SeaDream is the only commercial yacht that has docked in Banus. Several club members arrange a gathering with the local Ferrari Club and line up 20 or so Italian iconic automobiles along the pier. Just sit back and watch the scenery – awesome!

Gibraltar
Gibraltar is a British Overseas Territory located at the entrance of the Mediterranean on the southern end of the Iberian Peninsula. Most visitors arriving by sea are impressed by the rock’s enormous visual impact. Only covering an area of 2.3 square miles (6.0 sq. km.) several sites are a must-see! Some of the “can’t miss” options include the Great Siege Tunnels, St. Michael’s Cave, The Moorish Castle, The Lighthouse at Europa Point and shopping – yes shopping. SeaDream docks at the passenger terminal and has the coaches for the land adventures just outside. It is an easy walk downtown to the duty-free area. Bikes are available should you want to bike up the rock.

Malaga
Malaga, together with adjacent towns and municipalities such as Rincon de la Victoria, Torremolinos, Benalmadena, Fuengirola, Alhaurin de la Torre, Mijas, and Marbella, forms the Malaga Metropolitan area. The important cultural infrastructure and the rich artistic heritage have culminated in the nomination of Malaga as a candidate for the 2016 European Capital of Culture. The internationally acclaimed painter and sculptor Pablo Picasso and actor Antonio Banderas were both born in Malaga.