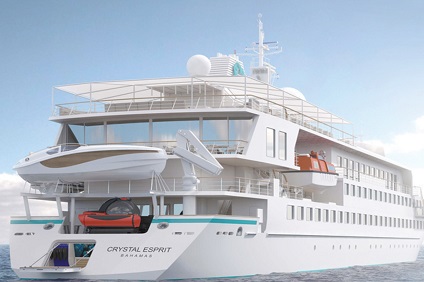 A celebratory voyage of cultural wonders and iconic marvels – spend New Year’s Eve in Dubai to witness one of most spectacular fireworks and laser displays in the world from your privileged vantage point aboard Crystal Esprit.

Khasab, Oman
Khasab, a city within the Sultanate of Oman, is an increasingly popular tourist destination. With your visit, you will know why. Dhow cruises showcase the inspiring scenery, calm waters are ideal for diving, and dolphins often are spotted frolicking in the sea. In addition to its hospitable waters, Khasab features dramatic landscapes, formed by a backdrop of mountain peaks, a picturesque coastal route and stretches of unspoiled beaches. And finally, there are the manmade wonders, including the old fort that dominates the harbor. Recently restored, the fort contains examples of traditional Omani watercraft.

Doha, Qatar
As home to over eighty percent of the emirate's population, headquarters for Al Jazeera Arabic television and capital of Qatar, Doha is a cultural and political hub of the Persian Gulf. It is also a growing metropolis, with the number of residents increasing by more than 60,000 between 2004 and 2006. This expansion is attributed at least in part to changes in property laws. Expatriates, of whom there are many in Qatar, were once not permitted to own land. Now non-citizens can purchase land, which entitles them to become a part of Qatar's thriving economy. So the rush is on, with acreage being scooped up and developed at a rate that compares to Dubai. Sheikh Hama bin Khalifa's modernization program further fuels the building boom. One of Doha's more impressive construction projects is the Pearl, an artificial island that covers 985 acres and house up to 30,000 residents.

Sir Bani Yas Island, UAE
Picture an African safari with game drives, nature walks, mountain biking, land sailing archery, horse riding, and exclusive outdoor dining experiences, only here on the Arabian Peninsula, and you have Bani Yas Island, the largest island of the UAE and home to the Arabian Wildlife Park. This wildlife reserve, established in 1977 by nature lover Sheikh Zayed, is a sanctuary for thousands of free-roaming wild animals, including the world’s largest herd of Arabian oryx, a critically endangered species of antelope. Other creatures found here are the sand gazelle, mountain gazelle, Sudan cheetah, Urial sheep, striped hyena, and even ostrich and giraffe. Another favorite, an introduction into Falconry. Water activities such as snorkeling , scuba, deep sea fishing, pearl diving, paddle boarding and kayaking offer glimpses of still more unique and indigenous animals. Decades of conservation has brought many species back from the brink of extinction, making this island an important haven for animals and a truly special spot for humans to watch and marvel.

Abu Dhabi, UAE
Abu Dhabi, United Arab Emirates, saw its first paved road in 1961, a few years after oil was discovered in the area. Since then, development has been at times cautious and later vigorous, resulting in today's wide modern boulevards lined with glistening towers. The city's banks, boutiques and highrises stand testament to a vital economy. Indeed, Abu Dhabi, the capital city of the UAE, is not only the most prosperous Emirate, but is also considered the wealthiest city in the world. With its ongoing commitment to science, education and the arts, Abu Dhabi is also seeking to be ranked as one of the world's top cultural destinations. The groundwork has recently been laid for a 200-million-dollar Guggenheim Museum, designed by none other than Frank Gehry. Scheduled for completion in 2011, the museum will showcase a prestigious collection of modernist and contemporary art. The structure promises to be a masterpiece in and of itself, as it promises to be the largest of the Guggenheim museums.