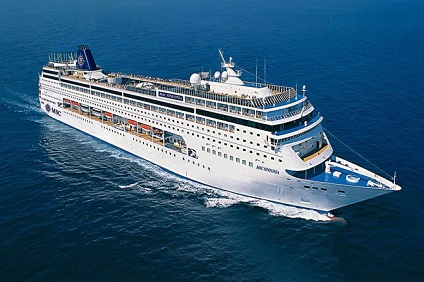 To step aboard MSC Cruises magnificient ship, MSC Sinfonia, is to embark on a voyage back in time as you travel in elegant Italian style to ancient Mediterranean cruise destinations such as Italy, Portugal and Spain or to beautiful Morocco, South Africa, Greece & France.

MSC Sinfonia is named in homage to the rousing symphonies of Europe's great classical composers: from Beethoven's romantic masterpieces to Mozart's lively works, paired with the contemporary tones of Debussy, Tchaikovsky and Brahms. We are sure your cruise holiday will be one of perfect harmony whether you are a first-time cruise passenger or seasoned ocean traveller!

And for the very first time onboard one of our MSC Cruises liners the MSC Sinfonia ship boasts a state-of-the art Virtual Golf Simulator that allows players, especially beginners, to practice their swing while sailing. Other state-of-the art amenities are found in the video games room and Teen Area. Don’t forget to recount your travels to envious friends back home from our well-equipped internet café!

But there's more. Treat yourself in the hair salon, beauty centre or gym. With an array of shows, music, discotheques, casinos, and more, MSC Sinfonia offers a ‘symphony’ of sumptuous activities to do.

Sun, sea and heaps of fun, a cruise holiday onboard MSC Sinfonia will truly be music to your ears.

Split, Croatia
Linger in a coffee shop and stare out at the blue horizon
With its seafront cafés and ancient alleyways, shouting stallholders and travellers on the move, bustling, exuberant Split is one of Croatia’s and the Mediterranean’s most compelling cities, it’s easy to see this feeling when you step aground from your MSC cruise.

It has a unique historical heritage too, having grown out of the palace built here by the Roman Emperor Diocletian in 295AD. The palace remains Split’s central ingredient, having been gradually transformed into a warren of houses, tenements, churches and chapels by the various peoples who came to live here after Diocletian’s successors had departed.

Adapted long ago to serve as Split’s town centre, Diocletian’s Palace is certainly not an archaeological “site”. Although set-piece buildings such as Diocletian’s mausoleum (now the cathedral) and the Temple of Jupiter (now a baptistery) still remain, other aspects of the palace have been tinkered with so much by successive generations that it is no longer recognizable as an ancient Roman structure. Best place to start exploring with an MSC excursion the seaward side of the palace is Split’s broad and lively Riva.

Running along the palace’s southern facade, into which shops, cafés and a warren of tiny flats have been built, the Riva is where a large part of the city’s population congregates day and night to meet friends, catch up on gossip or idle away an hour or two in a café. Nearly everything worth seeing in Split is concentrated in the compact Old Town behind the waterfront Riva, made up in part of the various remains and conversions of Diocletian’s Palace itself, and the medieval additions to the west of it. You can walk across this area in about ten minutes, although it would take a lifetime to explore all its nooks and crannies.

Dubrovnik, Croatia
Dubrovnik is located on the Adriatic Sea coast in the extreme south of Croatia, positioned at the terminal end of the Isthmus of Dubrovnik. It is one of the most prominent tourist resorts, a seaport and the center of the Dubrovnik–Neretva county.

Ancona, Italy
Ancona hits you with a tangle of commercial buildings only two steps away from the Mediterranean Sea. Nonetheless, a city centre excursion reserves some historical appeal, and the authorities are making a concerted effort to improve the cruiser and tourist experience. A stiff climb from the port area, where your MSC cruise ship awaits your return, passing Ancona’s well-signposted Roman remains along the way, will take you to the pink-and-white Duomo. Mostly built in a restrained Romanesque style, this is contrasted by an outburst of Gothic exuberance in the doorway’s cluster of slender columns, some plain, others twisted and carved.

The most memorable feature is a screen along the edge of the raised right transept. However, it may be the views from here, the cruise ships and the ferries lined up in the port and the coast fading into the haze, that remain longest in the memory.

Ancona’s large, three-storey Museo Archeologico in the old quarter is a fair place to while away an hour or two, its wacky moulded ceilings vaulting over a collection of finds ranging from red- and black-figure Greek craters to a stunning Celtic gold crown.

Tucked away at the foot of the flight of steps leading up to Ancona’s austere Dominican church, this worthwhile museum displays models, paintings, sculptures and original documents showing key events in Ancona from 2000 BC to 2000 AD. To the south of Ancona, some 32 km up the Esino valley from Jesi, with its white cliffs, blanched pebble beaches, thick protected forests and easy-going resorts, the Conero Riviera is the northern Adriatic’s most spectacular and enjoyable stretch of Mediterranean Sea coastline.