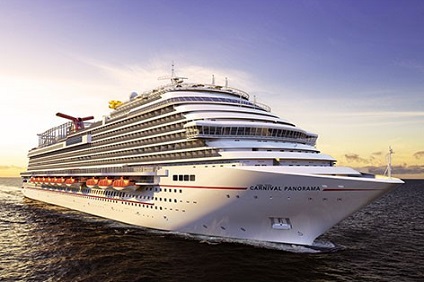 The 3,960-passenger Carnival Panorama, the third Vista-class ship in the fleet, will offer seven-day Mexican Riviera cruises from Long Beach at the end of 2019.

Like its name implies, Carnival Panorama will include onboard venues offering both indoor and al fresco experiences, including the Fahrenheit 555 steakhouse, Library Bar, and Bonsai Sushi, along with open-air attractions like the groundbreaking bike-ride-in-the-sky attraction SkyRide, a massive WaterWorks aqua park, and the SportSquare recreation area.

Also featured will be a vibrant Havana section with tropics-inspired staterooms and its own Cuban-themed bar and pool, Family Harbor featuring extra-roomy accommodations, the Family Harbor Lounge, and Ocean Plaza, a spacious dining and entertainment venue with indoor and outdoor seating.

Los Angeles
Los Angeles, often abbreviated to simply 'LA' is known for its golden beaches, superb surfing and numerous Los Angeles movie stars. Some of the most famous areas of Los Angeles include Hollywood, which is full of movie-related tourist attractions, and LA's Beach district, where you will find Malibu Beach amongst others.

Cruise along Los Angeles' Sunset Strip and Walk of Fame, take a walk along Rodeo Drive, drive past the enormous mansions in Beverly Hills, or explore the more cultural areas of LA, and you will realize why Los Angeles, the 'City of Angels', has become one of America's premier tourist destinations.

Other main tourist attractions in Los Angeles include First Interstate World Center - the tallest structure in the area, LA's Watts Towers - one of the most unique and creative landmarks in Los Angles; the Griffith Observatory - an impressive Art Deco observatory built in the 1930s; the Wells Fargo Center, LA's Union Station - featured in many Hollywood films in the 1940s; Crystal Cathedral a striking glass tower, and Elysian Park one of the largest parks in Los Angeles, with many scenic walking trails.

Cabo San Lucas
The hundreds of luxury hotel rooms along the corridor to the north of Cabo San Lucas have transformed the very essence of this formerly rustic and rowdy outpost. Although it still retains a boisterous nightlife that belies the pampered services that surround it, Cabo San Lucas is no longer the simple town Steinbeck wrote about and enjoyed.

Once legendary for the big-game fish that lurk beneath the deep blue sea, Cabo San Lucas now draws more people for its nearby fairways and greens - and the world-class golf being played on them. Today, it caters to a traveller getting away for a long weekend or indulgent stay of sport and relaxation. Cabo San Lucas has become Mexico's most elite resort destination.

Travellers here enjoy a growing roster of adventure-oriented activities, and playtime doesn't end when the sun goes down. The nightlife here is as hot as the desert in July, and oddly casual, having grown up away from the higher-end hotels. It's still the raucous, playful party scene that helped put Cabo on the map. A collection of popular restaurants and bars, spread along Cabo's main street, stay open and active until the morning's first fishing charters head out to sea.

Despite the growth in diversions, Cabo remains more or less a "one stoplight" town, with most everything located along the main strip, within easy walking distance.

Puerto Vallarta
By reputation the second of Mexico's beach resorts, PUERTO VALLARTA is smaller, quieter and younger than Acapulco.
Whether you just want to relax and get away from it all or you are in the mood to party all night, Puerto Vallarta is the place for natural beauty of the ocean and hills and the warmth of the people.

When most people think of Mexico, they think of the special culture of the state of Jalisco: the Mariachi music, the colorful, swirling traditional dresses, the manly horsemen, and let’s not forget Jalisco’s most popular export – tequila! Puerto Vallarta is on the coast of this most representative of all Mexican states and you can get to know Mexico by visiting Puerto Vallarta.