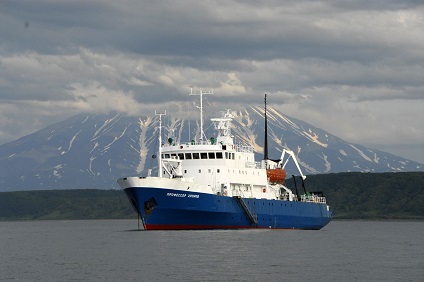 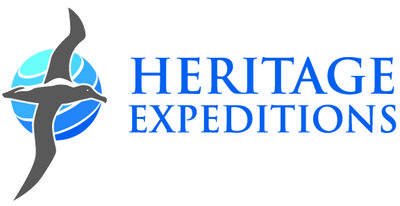 7 Night cruise departing roundtrip from Bluff aboard Spirit of Enderby.

7 Night cruise departing roundtrip from Bluff aboard Spirit of Enderby.

You won't find them mentioned in a travel brochure on your high street; you won't find them in most guidebooks, you probably don't know anyone that has ever been there and they don't even appear on some maps of the South Pacific - these are the ‘forgotten islands'. Despite their low profile, they are among the most remarkable wildlife reserves in the Southern Ocean, designated UNESCO World Heritage sites and afforded the highest protection of any nature reserves in New Zealand. Remote, uninhabited and on no regular shipping route, access is further restricted by a strict Management Plan which limits the number of people allowed ashore each year.

Departing the Port of Bluff (Invercargill) the first of these islands we visit are The Snares. No landings are permitted because the islands are honey-combed with seabird burrows. Of particular interest are the Snares Crested Penguin, a Fernbird and Tomtit all of which are endemic. We should see them all as we enjoy the dramatic coastline and tree daisy forest from our Zodiac cruise.

In the Auckland Islands, the largest of the island groups, we will have the chance to spend the day ashore on Enderby Island, arguably the most amazing Subantarctic Island. Here you can hike through the windswept Rata forests, and along the exposed coastal cliffs. The wildlife is never far away and its lack of fear means close encounters, great for photography and observations. In Carnley Harbour in the south of the Auckland Islands there are a number of fascinating sites, including a Shy Albatross colony, abandoned Coastwatcher's huts, a shipwreck and castaway depots that we can visit. The weather will dictate what we do.

Campbell Island, the southernmost island of this expedition, is an example of what can be achieved in restoring islands. In recent years sheep, cattle, cats and rats have all been eliminated and the island is rapidly recovering. The great English botanist Sir Joseph Hooker, a friend of Charles Darwin, visited Campbell Island in the 1840s and described the flowering fields of ‘megaherbs' to be "second to none outside of the tropics". We can say the same now, because of the removal of these introduced animals. This island is also the home of the majestic Southern Royal Albatross, the endemic Campbell Island Flightless Teal and Snipe.

These islands represent a priceless ecosystem. Joining this expedition redefines natural history travel and will leave you wishing you could have spent more time there.

Day 1: Invercargill
Meet at an Invercargill central city hotel and be transferred to the Port of Bluff for embarkation. The captain and expedition team will be waiting for your arrival on the Spirit of Enderby. Familiarise yourself on board and then join the captain on the bridge or fellow travellers on deck as we set sail and our adventure begins.

Day 2: The Snares – North East Island
The largest of this group of islands is North East Island, a nature reserve of international importance and home to more nesting seabirds than all of the British Isles put together. A group of islands that have had no introduced mammals, they are a pristine haven for wildlife. Snagged with hidden reefs we learn how the islands got their name. We will cruise the jagged coastline by Zodiac allowing us to see some of the features of the island. From the water we can view the unique large tree daisies Olearia lyallii and Brachyglottis stewartiae which dominate much of the island, creating a forest canopy and draping the hills. Our cruise should also allow us to encounter some of the birdlife that inhabits these islands, including the endemic Snares Crested Penguin. We may also catch glimpses of the Snares Island Tomtit and Fernbird which are unique to these islands. On the cliffs we will likely see Buller’s Albatross whose Maori name translates as ‘flying wind’ which could be an apt description of The Snares. This species only nests here and at the Solander Islands.

Day 3: Auckland Islands – Enderby Island
Enderby Island is a wildlife rich island that has no equal in the Southern Ocean. Offering a varying landscape where the Rata forests are regenerating and there is a resurgence of herbaceous plants, it is one of the most beautiful islands in this group. The island is home to the Hooker’s or New Zealand Sea Lion which breeds on Sandy Bay beach where we plan to land. This animal is the rarest sea lion in the world. We will walk to enjoy close encounters with the Royal Albatross nested amongst a hummocked sward of Oreobolus pectinatus and regenerating tussock. There is a good chance that we will see the endemic snipe, shag and Auckland Island Flightless Teal as we walk around the island. We plan to spend some time with the Yellow-eyed Penguin, the world’s rarest penguin and the fourth largest of the world’s penguins. Unique fields of megaherbs, whose languorous names promise the exotic: the Bulbinella rossii, the regenerating patches of Anisotome latifolia and the vivid red and white gentians, make an unforgettable sight. Native birds such as the Tui, Bellbird and parakeets benefit from the presence of Rata trees and can be heard in the forest.

Day 4: Auckland Islands – Carnley Harbour
Auckland Island is the largest of the islands in the group. The western coastline has been sculpted into formidable cliffs by the prevailing westerly winds, and to the east, the coast has been carved by glaciers into some of the most picturesque fiords in the world. Our anchorage in Carnley Harbour in the south of the group offers a range of activities, depending on weather and sea conditions. We could go in search of a Shy Mollymawk Albatross colony and perhaps spot the beautiful Wandering Albatross spreading its huge wingspan above the cliffs. Other possibilities include visiting the abandoned World War II coastwatcher’s station or the remains of a ship wrecked in 1864 and made famous by two books written by the survivors.

Days 5 to 6: Campbell Island
Explore the island by foot and take in the panorama of rocky islets and sea stacks, once the lonely preserve of settlers and seal hunters and now returned to nature. Campbell Island is known for its megaherbs – herbaceous, perennial wild flowers characterised by their great size, with huge leaves and very colourful flowers, which have developed as an adaptation to the harsh weather conditions on the islands. Our visit should coincide with the flowering of the Pleurophyllum speciosum, an endemic daisy carpeting the hills and startling in size with leaves sometimes half a metre wide. Adapting unusually to survive the harsh climate, its nearest relatives can be found in the Canary Islands. There will be a range of walks offered. You can explore an abandoned Meteorological Station at the head of the harbour or take the Col Lyall Saddle walk which offers an opportunity to view and photograph the Southern Royal Albatross nesting amongst the flowers and tussocks. Alternatively, walk to remote Northwest Bay across the tussock tops and megaherb fields to an isolated coastline that Southern Elephant Seals haul out on and New Zealand Sea Lions and Yellow-eyed Penguins call home. Or we could climb the beautifully-named Mt Honey which offers dramatic views from its summit.

Day 7: At Sea
A day at sea provides a great opportunity to reflect on the voyage and the Subantarctic Islands that we have visited. Today spend time on deck and view pelagic bird species that come close. We may also see cetaceans such as the Dusky Dolphins which sometimes surf the bow waves of the ship, and if sea conditions are good, a number of different whale species are a possibility. The day is interspersed with illustrated lectures of the biology and history of the area we have visited and the Southern Ocean.

Day 8: Invercargill
On arrival at the Port of Bluff this morning, we have our final breakfast and say our farewells before disembarking and taking a complimentary coach transfer to either a central city point in historic Invercargill or to the airport. 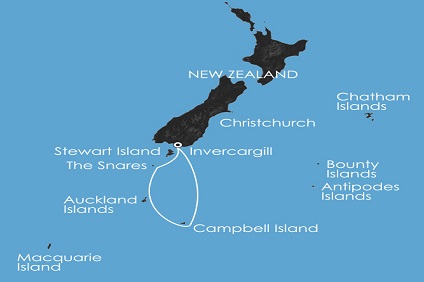