Royal, Voyage of the Glaciers ex Whittier to Vancouver 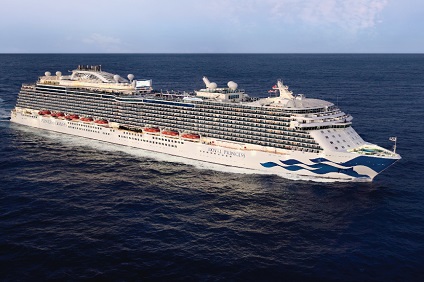 7 Night Cruise sailing from Whittier to Vancouver aboard Royal Princess.

7 Night Cruise sailing from Whittier to Vancouver aboard Royal Princess.

Whittier (Anchorage), Alaska
The City of Whittier, Alaska, is known as the gateway to Prince William Sound, a fjord at the head of Passage Canal, 65 miles southeast of Anchorage. Established as a strategic military facility during the Second World War, Whittier's ice-free port remains a focal point for marine activity and freight transfer from sea train barges serving Southcentral Alaska. Passage Canal is one of the most westerly of several long fjords comprising Prince William Sound. Despite the presence of several glaciers in the surrounding valleys, ice does not form in Passage Canal during the winter. Thin layers of ice form, however, on structures and facilities exposed to ocean spray. Migratory birds such as geese, ducks and cranes use Portage Pass in crossing the Coast Range between Prince William Sound and Western Alaska. Some waterfowl, however, remain in the Whittier area year-round. A large rookery on the north side of Passage Canal contains numerous birds including gulls and kittiwakes.

Hubbard Glacier, Alaska (Scenic Cruising)
Nicknamed the "Galloping Glacier," this east Alaskan glacier is rapidly advancing toward the Gulf of Alaska into a pristine area known as Disenchantment Bay. In fact, its movement temporarily formed a natural dam that twice closed off nearby Russell Fjord from the bay, but the intense water pressure building within the fjord-turned-lake has thus far been enough to explode through the wall of ice.

The largest tidewater glacier in North America, Hubbard Glacier measures 76 miles long and plunges 1,200 feet into the depths of the bay. Its immense beauty and phenomenal blue hues are enchanting, even from afar. But it's when your cruise ship draws closer that its towering surface really impresses, dwarfing even the uppermost deck on your ship at a whopping 40 stories high. There, with the snowcapped mountains serving as a glorious backdrop, you'll have a prime viewing spot from which to witness the glacier calving, as it often expels icebergs the size of 10-story buildings-imagine the splash!

The area around Hubbard Glacier is also renowned for its wildlife, where whales, harbor seals and otters swim, brown bears, moose and black-tailed deer roam ashore, and a wide variety of seabirds soar gracefully across the sky.

Glacier Bay National Park, Alaska (Scenic Cruising)
Princess is one of a select few cruise lines permitted to cruise the pristine waters of Glacier Bay, the highlight of our 7-day Voyage of the Glaciers cruise. Just west of Juneau, this breathtaking national park and preserve boasts some of the world's most spectacular tidewater glaciers, such as Margerie Glacier, which often drops colossal chunks of ice into the sea. Not surprisingly, Glacier Bay National Park and its epic ice giants are part of a UNESCO World Heritage Site comprising Alaska's magnificent park system.

During your scenic cruise, friendly Park Rangers will join the ship to share their knowledge of this amazing place and host a fun Junior Ranger program for kids. They may even be able to help you identify Glacier Bay's abundant wildlife, including humpback whales, sea otters, porpoises, harbor seals, black bears, mountain goats, bald eagles and large colonies of seabirds.

Take in the awe-inspiring scenery as you enjoy an unforgettable day of sailing through this dazzling park, where you'll glide along emerald waters and past calving icebergs, and can breathe in the crisp, fresh air to your heart's content.

Skagway, Alaska
This "Gateway to the Klondike" watched as countless fortune-seekers passed on its streets as they headed to the Chilkoot and White Pass Trails during the heyday of Alaska's Gold Rush. Today, you can still feel like a prospector in Skagway, as you walk along its rustic boardwalks and frontier-style storefronts.

Juneau, Alaska
Perched on a thin strip of land at the mouth of Gold Creek, Juneau is arguably one of America's most beautiful state capitals, with the looming summits of Mt. Juneau and Mt. Roberts providing a gorgeous backdrop.

Ketchikan, Alaska
This southern-most Alaskan port of call is known as "Alaska's First City" because it's the first major community travelers come to as they travel nortth. Founded as a fishing camp, Ketchikan is built on steep hillsides and is billed as the salmon capital of the world.

Vancouver, British Columbia
Often thought of as Canada's most beautiful city, Vancouver is a thriving metropolis that's fortunate enough to be surrounded by so much natural beauty. With its numerous parks, beaches, gardens, museums, art galleries - even the second-largest Chinatown in North America - Vancouver is one of those rare places that actually lives up to its promise of offering something for everyone. 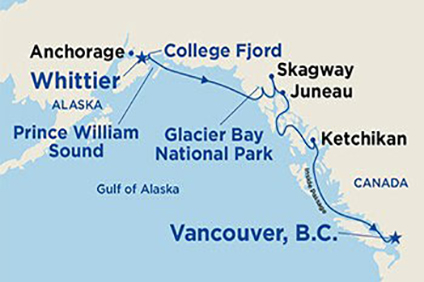