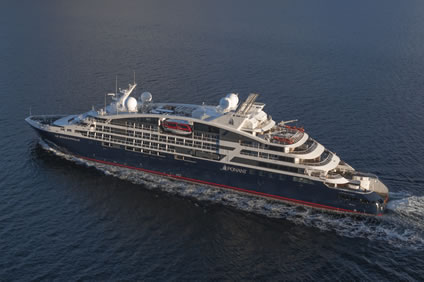 7 Night Ancient Treasures of the Mediterranean departing from Athens to Istanbul onboard Le Bougainville.

7 Night Ancient Treasures of the Mediterranean departing from Athens to Istanbul onboard Le Bougainville.

Fall under the spell of the Mediterranean’s key sites during an 8-day cruise offered by PONANT. With Athens as the departure point, board Le Bougainville for an unforgettable sailing experience discovering exceptional islands and cities.

Your cruise will begin with the exploration of two of Greece’s major sites, from Napflio: the Mycenae ruins and the Epidaurus theatre, both UNESCO World Heritage Sites.
Le Bougainville will then head towards Paros. Nestling in the heart of the Cyclades archipelago, this island reputed for its sublime white marble offers a real concentration of Greek beauty, from whitewashed houses to olive groves to ancient monuments.

A little further north, you will arrive on Mykonos, with its iconic windmills, beaches, countless churches and whitewashed houses.

Following this port of call, Le Bougainville will leave Greece to reach Kusadasi, in Turkey. An old fishing village with history going back 5,000 years, not far from the Ephesus site, the town is now one of the country’s most famous seaside resorts.

Your trip continues with a stop at the small and picturesque port of Dikili, a gateway to the archaeological site of Pergamum renowned for its ancient ruins.

ATHENS
The Greek capital city is located on the edge of the Saronic gulf, in the east of the country. It bears a plural name in reference to the first villages that surround the Acropolis. You will be enchanted by the rocky plateau presided by its monuments listed as UNESCO World Heritage. In the city below, you can visit some of the liveliest districts in Athens: Plaka, with its maze of colourful streets, and where, in the evenings the drifting aroma of moussaka and garlic prawns will tickle your taste buds. Don’t miss anything of the city’s cultural past. Pay a visit to the National Archaeological museum, or the Cycladic Art Museum.

NAFPLION
The engaging town of Nafplio is staggered up green hillsides of the Argolic Gulf, to the east of the Peloponnese. Don’t be surprised by its extremely varied cultural heritage. For instance, you’ll see the ancient agora on the plateau of Akronafplia, Italianate arcades in Syntagma square as well as the baroque fortress of Palamidi on a hillside of the same name. At the top of the hill, views of the gulf and the surrounding mountains are simply awesome. If you want to chill out by the water’s edge, walk along the Arvanitia promenade to a beautiful creek in the shade of cedars and cypresses.

PAROS
Famous for its white marble, the island of Paros is located in the Cyclades. Along the quays of Parikia, its main town, you’ll see Byzantine churches and neoclassical buildings. To make the most of the turquoise waters, you can stop over in Naoussa. This little fishing port is bounded by a very beautiful cove and offers more than one café to sit and unwind.

DELOS
This legendary Cyclades island of Delos stands just a few miles southwest of Mykonos. The ceremonial solemnity of this ancient holy sanctuary will not leave you indifferent. The sheer size and importance of this UNESCO World Heritage site which covers over half of the island is thrilling in itself. From the Stoa of Antigonos, the Terrace of the Lions, to the carved marble animal statues, you will make discovery after discovery, against a backdrop of the Aegean stretching to the horizon. The theatre steps on the hillside are a particularly good place from which to enjoy the expansive view.

MYKONOS
Nicknamed “little Venice”, Mykonos is famous for its Alefkandra district where houses are built right on the water’s edge. Their multi-coloured loggias are emblematic of this Cyclades island, as are the pelicans and windmills. You can get close up to the birds on the quaysides of the old port. Up on the hillside, you can see the windmill sails turning. In the cobbled streets of the pedestrian centre, bougainvillea bedeck immaculate facades. As you weave in and out of the little streets, snatches of coastline will undoubtedly call you to the island’s beaches, the quietest of which can be found on the northern coast.

PATMOS
Patmos is one of the legendary must-see islands in the Dodecanese. This is where Saint John resided, presumed author of the last book in the Bible. The cave of the Apocalypse and the Saint-John-the-Theologian Monastery are dedicated to him. These sites, which are listed by UNESCO as World Heritage, are located at the top of a hillside planted with vines and orchards. On the shore, the crystalline coves of Kambos and Lampi offer absolutely gorgeous swimming areas. You’ll be drawn to the bustle in Skala harbour and its taverns, famous for their fish soup and tiropita, which is a type of pasty filled with fresh Patmos cheese.

KUSADASI
The attractive seaside resort of Kusadasi is located in a gulf on the western coast of Turkey. You can bathe there in clear waters or stroll along the coastal walk, in the shade of palms. In the historical district, you can take a mosey down the narrow streets and explore the colourful shops in the bazaar. Close by, the Ephesus archaeological site in the hillsides provides an opportunity to discover the ruins of one of the most famous cities of Antiquity.

DIKILI
The charming harbour city of Dikili is located on the west coast in the province of Izmir. It’s shoreline of turquoise waters is an invitation to come. In the shade of maritime pines, the streets in the town centre will win your favour with their fresh fruit juice stands and honey cakes. You can also go on a wander inland and visit the Pergamon acropolis.

ISTANBUL
Located on the Bosphorus, Istanbul is one of the most beautiful of all Turkish cities. Named Byzantium when founded by the Greeks, and then Constantinople under the Roman Empire, this city is steeped in history and, for this reason, is a listed UNESCO World Heritage site. On Sultanahmet hill, you’ll see the great Blue Mosque, the mysterious Hagia Sophia and the vast Topkapi palace and its countless mosaics. In the Beyazit district, you can admire the elegant covered passages of the Grand Bazaar. A little further away, the delicate aroma of loukoum and spices will draw your attention at the Egyptian Bazaar.