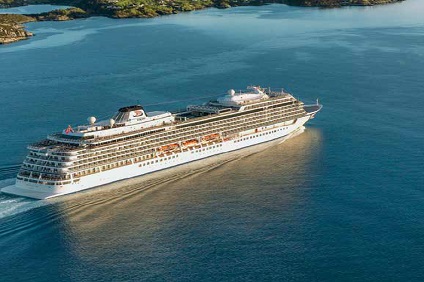 14 Night Cruise sailing from Bergen to Barcelona aboard Viking Sun.

14 Night Cruise sailing from Bergen to Barcelona aboard Viking Sun.

Trace medieval routes of commerce during a fascinating 15-day cruise, bookended by enriching overnight stays in Bergen and Barcelona. Explore three of Europe’s most picturesque cities: Amsterdam, Bruges and Paris. Call on England from Portsmouth and Falmouth. Admire the neoclassical gems of the wine-making city of Porto. Explore Málaga, gateway to the Alhambra palace. And view the splendid Roman ruins of Cartagena.

Day 1 Bergen, Norway
When you arrive in Bergen, encircled by majestic mountains, fjords and glaciers, you’ll quickly understand how its setting inspired the Viking sagas. With your ship berthed next to Bryggen wharf, a UNESCO World Heritage Site, you can easily stroll along its waterfront once you’ve settled in to your veranda stateroom. This evening mingle with the locals and dine ashore, as we will be spending the night in port.

Day 2 Bergen, Norway
Take in more of Bergen’s Norwegian charms this morning. You’ll see the beautiful 18th-century wooden houses and visit the Hanseatic Museum on your included tour. Or, take an excursion to Troldhaugen, the home of Norway’s famous composer Edvard Grieg, or a trip to the peak of Mt. Ulriken to savor an Ulriken bun, a cinnamon pastry, at the mountaintop restaurant.

Day 3 Cruise the North Sea
Cruise the North Sea today. Vikings sailed these waters to establish colonies on Scottish islands, coastal France and beyond. In medieval days, the North Sea became a busy thoroughfare for trade as goods were exchanged between Scandinavia and the Mediterranean, with the powerful Hanseatic League controlling much of the traffic. As you sail, you might find your inner calm with yoga on the Sports Deck. Lounge by the Main Pool with its retractable roof and enjoy a cocktail at the Aquavit Bar.

Day 4 Amsterdam, The Netherlands
Explore Amsterdam, the celebrated city of canals. This elegant city was born from the Dutch Golden Age, when merchants fed their coffers from the Indonesian spice trade and commissioned great works of art. You can see many of them, including Rembrandt’s The Night Watch, in the excellent Rijksmuseum. Embark on a canal cruise to get acquainted with the city’s charms and experience its laid-back rhythm. Don’t forget to stop for a sweet or savory classic Dutch pancake, a favorite local treat.

Day 5 Bruges, Belgium
Call on Zeebrugge, Belgium’s most important fishing port and your doorway to canal-laced Bruges, one of Europe’s most remarkably preserved medieval cities. Bruges’s early textile trade made it one of the wealthiest trading towns in the world, and the world’s most important port. You can explore its cobblestone streets, ascend its towering belfry in the Market Square for sweeping views of restored guild houses and tree-shaded squares, and shop for lace and chocolate.

Day 6 Paris (Le Havre), France
Arrive in historic Le Havre today, a UNESCO World Heritage Site on a Seine River estuary. This historic port city is the gateway to Parisian pleasure, so you’ll take a scenic drive through Normandy’s countryside to the heart of Paris. You’ll have time on your own to ascend the Eiffel Tower for sweeping city views, or marvel at the Gothic glory of Notre Dame Cathedral. Alternately, you might choose to pay homage at D-Day beaches or stroll the pretty quay of the artists’ town of Honfleur.

Day 7 Portsmouth, England
You’ll enjoy a picturesque arrival into Portsmouth, sailing between Napoleonic forts in the Solent Strait and passing stunning citadels at the harbor’s entrance. Then discover the city’s prestigious maritime past. This historic naval port houses such historic vessels as Henry VIII’s Tudor battleship Mary Rose and Lord Nelson’s HMS Victory. Stroll the docklands of the rejuvenated waterfront and visit the D-Day Museum, commemorating the preparations for the Allied landings of the massive fleet that departed here on June 6, 1944.

Day 8 Falmouth, England
Call on Falmouth today, gateway to the dramatic county of Cornwall in the most southwestern corner of England. Admire the gray granite architecture and hilltop college of this picturesque port city overlooking the deep, scenic harbor, famous as a backdrop of countless film and television series. Henry VIII built his Pendennis Castle here to defend his country from France and the Holy Roman Empire.

Day 9 Cruise the Atlantic Ocean
Head south in the Atlantic today, skirting the waters of the Bay of Biscay. This region of the Atlantic long served as a trade route for ships bearing goods from Asia, including vessels from the British East India Company, the Dutch East India Company and many others. During your passage, you can melt into a Swedish massage at The Spa or find your inner calm with yoga on the Sports Deck. This evening, watch a film al fresco at our Main Pool.

Day 10 Porto, Portugal
Leixões, the coastal city where we dock for the day, boasts a history that spans 1,600 years. It’s a port of call that is sure to inspire you to raise a glass to port wine and to the town for which it was named, Porto. On an included tour, you can soak in the charm and atmosphere of the celebrated wine town. You’ll see its Clérigos Tower, the historic quarter surrounding Santa Catarina Street, the neoclassical wonders along Avenida dos Aliados and the São Bento Railway Station, adorned with magnificent tile work. Naturally, you will pause along the way for a taste of the port wine for which this city is famous. As an option, you can delve more deeply with a Porto walking tour.

Day 11 Cruise the Atlantic Ocean
Sail through the famed Strait of Gibraltar today into the Alboran Sea, the westernmost portion of the Mediterranean. On a clear day, you will spot the giant Rock of Gibraltar on the port side. In legend, this enormous geological wonder is one of the Pillars of Hercules, the other being Monte Hacho, a low mountain in Ceuta, a Spanish province in North Africa. As you cruise, perhaps you’ll soothe your body with a hot sauna and a few minutes amid the gently falling snow of the Snow Grotto. This evening, enjoy cocktails in the Explorers’ Lounge and an authentic Italian meal at Manfredi’s Italian Restaurant.

Day 12 Granada (Málaga), Spain
Today you can experience firsthand the stuff of Andalucian dreams. Birthplace of Pablo Picasso, Málaga is the gateway to Andalucia, the seductive province of rolling hills and endless olive groves. An included tour features the 11th-century Alcazaba Palace, residence of Arabian caliphs, the ancient Moorish Gibralfaro Castle, the Renaissance Cathedral and Picasso’s birthplace. Or, choose to explore the mighty Alhambra Palace in Granada, one of Spain’s most treasured sites.

Day 13 Murcia (Cartagena), Spain
Uncover the rich history of Cartagena today, brimming with remarkable architecture spanning the ages—from the days of Rome to art nouveau. Outside the city, marvel at the beauty of the sanctuary of the Virgin of Fuensanta, Murcia’s patron saint, and the baroque- and Gothic-style cathedral. Alternately, explore Cartagena’s impressive Roman Theater and Roman Forum.

Day 14 Barcelona, Spain
Soak up the charm of sunny Barcelona, the Catalonian capital of culture. Stroll along Las Ramblas, take in the architectural masterpieces of Antoni Gaudí or explore the myriad side streets of the ancient Gothic Quarter. Take an included tour today, or opt for one of the many optional shore excursions we offer.

Day 15 Barcelona, Spain
Awake in Barcelona, where you will be finishing your journey. From here, you can easily spend a few extra days to further explore this city and its world-class culinary delights, or discover other areas of Spain.