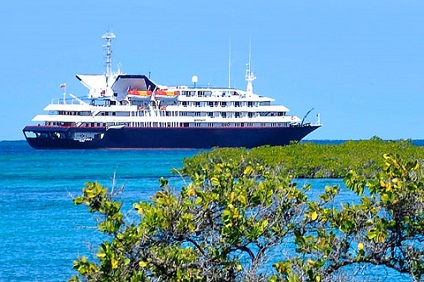 With no other place like it, the Galapagos are the earth’s living laboratory. Home to some of the highest levels of endemic species, these islands are reputed not only for their ancient and diverse wildlife but for their stunning natural beauty. Whether you are a birder, botanist or simply just curious, expect to be conquered by this trip.

Isla Daphne Grande
Daphne Major is a volcanic tuff crater island, located to the north of Santa Cruz Island not far from Baltra International Airport. Circumnavigating the island by ship will reveal the rocky outcropping from all angles as it rises approximately 120 meters (390 feet) above sea level. Usually only scientists are allowed to land on Daphne, so it will be a special event to come in close with the ship and watch for Nazca and Blue-footed Boobies, frigatebirds, Red-billed Tropicbirds, Brown Noddies, Brown Pelicans, and Swallow-tailed Gulls riding the sea breezes swirling around this rugged landmass.

Bahia Darwin, Genovesa
At Genovesa Island the ship tucks into Darwin Bay, an ancient volcanic crater now flooded by the sea. Zodiacs land on a picturesque sandy beach where Galapagos sea lions often rest on the fine, white sand. Explorations along the shore may reveal marine iguanas looking like prehistoric dinosaurs in miniature. By heading inland a short distance visitors could encounter seabirds of all shapes and sizes nesting in the vegetation. Scores of immature Red-footed Boobies perch on branches within an arm’s reach of the path. In addition, watch for Great Frigatebirds and Yellow-crowned Night Herons along the walk.

El Barranco, Genovesa
From Darwin Bay on Genovesa Island explorers can access an area known as El Barranco or the “Prince Philip’s Steps”. A brief scramble up the stone steps brings you to the plateau of the island. From here, on flat ground, a small trail wanders past Red-footed Boobies, perching frigate birds, Galapagos Mockingbirds, Nazca Boobies, and Galapagos finches. The highlight however, is arriving on the windward side of the island to see hundreds of Wedge-Rumped Storm Petrels flying around in a frenzy of activity above the lava field where they nest. In addition to the petrels, their predator, the Short-eared Owl can also be spotted here, perhaps even actively hunting its prey.

Seymour Norte
The landing at North Seymour Island is onto black lava rock. After a short climb, visitors arrive on the island’s flat plateau where a number of sea lions nurse pups and frigatebirds nest. The island is dry, and so the predominant tree is the prickly pear cactus favored by the yellow Conolophus land iguanas that live here in number. The undulating terrain is littered with red-brown volcanic boulders and large male Magnificent Frigatebirds can be seen inflating their vivid red gular sacs in hopes of impressing females flying overhead. At certain times of the year, pairs of Blue-footed Boobies dance here in a ritualized mating dance that reinforces their pair bond and shows off their vivid blue feet.

Bahia Sullivan, Santiago
The lava fields of Sullivan Bay on Santiago Island will inevitably remind visitors of the surface of the moon. As brilliant red Sally Lightfoot crabs scuttle along the black volcanic shores, learn about the formation of the islands through geological forces from your guides. The lava flows here are just over one hundred years old and date back to 1897. The lava took on a rope-like appearance and geologists have adopted a Hawaiian word, pahoehoe, as the technical name for this kind of volcanic rock. After walking the exposed rocky terrain, it is a welcoming sensation to return to the sandy beach and get ready for a swim or a snorkel.

Rabida
Rabida Island has received accolades for being one of the most exotic spots on earth and while it is small in size, the island is dramatic in scale. Rugged red cliffs rise from the sea and Zodiacs land onto a beach of dark red sand colored by iron ore. Ghost crabs and Galapagos sea lion pups often rest on the russet sands. Further inland, the rusty sand gives way to shrubby coastal vegetation dominated by prickly-pear cactus. Common Cactus Finches feed on the yellow flowers while Darwin finches and lava lizards skitter across the path in search of food.

El Eden, Santa Cruz
Just off Santa Cruz, Eden Islet offers up a thick coastal mangrove forest growing on black volcanic boulders peppered with tall prickly pear cactus. Eden is a small, eroded tuff cone from an ancient volcano, and is an excellent example of the unique geology of the Galápagos. The shallow waters around the island are ideal for spotting Pacific green sea turtles, reef sharks, eagle rays, sea lions, marine iguanas and Sally Lightfoot crabs. Explore by Zodiac or kayak, and watch for Brown Pelicans flying and diving to scoop up their prey, while Blue-footed Boobies enter the water like torpedoes to spear small fish.

Galapaguera Cerro Colorado, San Cristobal
Giant tortoises are emblematic of the Galapagos Islands. To experience these ancient animals firsthand, the Silver Galapagos anchors off San Cristobal Island and Zodiacs take all ashore to the pretty little town of Puerto Baquerizo Moreno. From here we set out by bus for the Galapaguera Cerro Colorado Tortoise Reserve in the highlands of the island. The trails of the reserve lead to encounters with large, lumbering adult tortoises as well as small juveniles that could fit in the palm of a person’s hand. Back in town take time to wander the shops or photograph the Galapagos sea lions resting on local boats, lazing about under park benches, or lounging on rocks surrounding the working waterfront.

Punta Pitt, San Cristobal
On the northern shore of San Cristobal Island is a peninsula known as Punta Pitt. The point is made up of two coalesced volcanoes and is much younger than the rest of the island. Some of the lava flows are only a few centuries old. From a sandy beach Zodiac landing leads a long walk following a twisting red gravel path that runs through black basalt lava rocks, and between craggy peaks. The vegetation along the way is low and scrubby, and attractive blue-gray lichen grows on the rocks. Gaining elevation along the narrow trail will open up views of the Silver Galapagos sitting in a sapphire blue sea far below.

Gardner Bay, Espanola
Isla Champion is a small islet off Floreana Island’s northeast coast. To cruise by it reveals a bare, rocky island without much allure, but to enter the infinitely blue waters around this small landmass is to discover a spectacular underwater realm. The visibility is generally impressive and thanks to this water clarity snorkelers often spot reef sharks patrolling the reef wall, cruising Pacific green turtles, and playful Galapagos sea lions. Encounters in the blue with thousands of small silver minnows, large tuna fish, or oceanic sunfish are not unheard of either.

Punta Suarez, Espanloa
Punta Suárez lies at the western point of Española, the oldest island in the Galápagos. Sheer cliffs provide superb thermals for seabirds and you may spot Swallow-tailed Gulls, Nazca Boobies and Blue-footed Boobies on the breeze. The largest seabird to nest in the Galapagos Islands is the Waved Albatross. These ocean wanderers can be seen seasonally here from April through December, when pairs reunite on Española, going through an elaborate pair-bonding display. Mockingbirds, doves, and occasional Galápagos Hawks can also be seen on the point, along with sea lions and colorful marine iguanas.

Estacion Darwin & Puerto Ayora, Santa Cruz
Silver Galapagos will anchor in front of Puerto Ayora, Santa Cruz, where the prestigious Charles Darwin Research Station is located. The station also houses the Fausto Llerena Breeding Center for giant tortoises and land iguanas where guides interpret the center’s captive breeding and reintroduction programs. In addition to these star species, throughout the station there are huge prickly pear cactus trees being fed upon by the pretty Galapagos Cactus Finch. To round out the stay in Puerto Ayora, enjoy free time in town where local artists have created charming art galleries and corner cafés.

Plazas Sur
South Plaza is a serene island located close to the eastern coast of Santa Cruz. This small island is sprinkled with giant prickly pear cactus, carpeted with a reddish mat of ground-cover succulents, and is home to a large nesting colony of Swallow-tailed Gulls, along with marine iguanas and Galápagos sea lions. Seabirds crowd the island’s shores including Blue-footed Boobies, Nazca Boobies, Brown Pelicans, and frigatebirds. However, the birds, seals and marine iguanas share the spotlight with brilliant yellow land iguanas of the island. These plump terrestrial reptiles live well eating the plentiful prickly pear cactus fruits and pads found here.