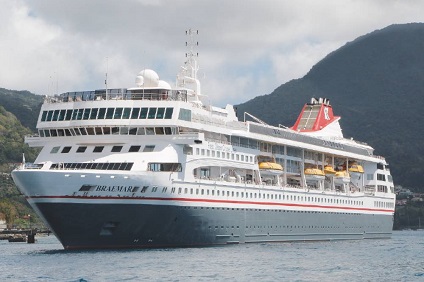 Revel in the drama and sheer, unrivalled beauty of the Norwegian Fjords, as smaller-scaled Braemar brings you closer to awe-inspiring sights galore on this eight-night journey of discovery. Ever changing scenes of dramatic peaks and orchard-laden valleys will be revealed as you divert into the heart of the fjordland; while four enchanting destinations will provide highlights aplenty.

Stavanger, a former ‘European Capital of Culture’, is rich in diverse attractions. Stopping here affords you an opportunity to explore the historic Gamla Stavanger district, with its distinctive wooden architecture, and visit the interesting Canning Museum. Alternatively, for your first taste of the fjords’ serenity and scenic beauty, you could opt for a boat trip to the idyllic Lysefjord. In Bergen, you’ll revel in this Hanseatic city’s plethora of authentic experiences. You could take in its mix of galleries and museums, including the Troldhaugen – the former home of legendary composer Edvard Grieg, and famous, centuries-old sites such as the UNESCO-listed Bryggen Wharf and bustling fish market. Don’t miss the chance to ride the funicular railway up Mount Fløyen for stunning views of the city and its surrounding scenery too. Show less
Situated deep within Nordfjord, Olden is your gateway to a plethora of natural wonders. The astonishing Briksdal Glacier and Europe’s largest inland glacier, Jostedalsbreen; and Lovatnet Lake are particularly impressive and just a short trip away. These fjordland treasures also feature in the panoramic views on offer from atop nearby Mount Hoven, reached via the spectacular Loen Skylift. After Olden, scenic cruising of Nordfjord and by Hornelen – Europe’s highest sea cliff – aboard Braemar will provide unmissable photo opportunities. Your final stop is at Eidfjord, for chances to see Vøringsfossen – one of Norway’s most famous waterfalls – in all its tumbling glory; or even visit the Hardanger Juice and Cider Factory to sample locally produced delights. To witness the impressive landscapes of Hardangerfjord from a unique perspective, perhaps opt for a kayaking adventure before returning to Braemar for a memorable scenic cruising of the ‘Queen of the Fjords’. Scenic cruising of Lysefjord, your last chance to capture the fjordland’s wondrous scenery, makes for a memorable finale to your holiday.

Stavanger, Norway
Behind the bustle of the prosperous and cosmopolitan Stavanger of today lie 1,000 years of ancient seafaring tradition and history. This vibrant, exciting Norwegian city oozes charm and was awarded the prestigious title of ‘European Capital of Culture’ in 2008.

The city’s wealth has prompted its tag as Norway’s ‘Oil Capital’, but Stavanger has remained as charming as ever. The old town, Gamle Stavanger, has narrow winding streets and ancient wooden houses gathered round an historic fresh fish and vegetable market. Stavanger is also a university city, which is reflected in the city’s lively, urban atmosphere, and in the varied assortment of shopping and dining experiences.

The Norwegian Petroleum Museum exhibits drilling equipment, a model oil platform, submersibles and audio-visual shows, while the city’s Herring Canning Museum celebrates one of Stavanger’s earlier sources of wealth. Beyond the town, the Three Swords monument commemorates the 9th century battle of Hafrsfjord – the moment Harald Hårfagre became the first King of Norway.

Bergen, Norway
Seven hills and seven fjords frame Hanseatic Bergen, a city steeped in maritime heritage. Of Bergen’s many attractions, the 900-year-old UNESCO-listed Bryggen Wharf. A delight to explore, the Bryggen's cobbled stairways are lined with traditional half-timbered buildings and climb away from the waterfront, leading to curious open spaces that are often overflowing with colourful flowers that perfume the air.

Bergen has a vibrant fish market and hosts one of Norway's biggest cultural events of the year, the Bergen International Festival. The city was once the home of Norway's most famous composer, Edvard Grieg, and the Troldhaugen Museum is devoted to his life’s work.

Not to be missed is a chance to ride the Funicular Railway to the top of Mount Fløyen, offering spectacular panoramic views of Bergen and its scenic surroundings.

Olden, Norway
At its eastern end, the magnificent Nordfjord divides into three arms beneath the glaciers of the Jostedalsbreen, and Olden sits at the beginning of the southernmost of these arms. A charming village, Olden is among green meadows which are ablaze with colourful flowers throughout the summer, and through which babbling brooks meander between pretty houses.

In the centre of the village is the Old Church, built in 1759 on the site of a 14th century stave church: the timber was used for the pew doors and doorposts. Near the church is the Singerheimen, the former home of William Singer the millionaire founder of the sewing-machine company. He was a gifted amateur artist, and some of his paintings of the Olden area can be seen in his workshop.

The beautiful Oldedalen Valley extends for 12 miles behind Olden and is an absolute joy to explore. On an adventure into the valley you can marvel at huge, near-vertical cliffs, a string of spectacular waterfalls, and sparkling glaciers, such as the astonishing Briksdal.

Eidfjord, Norway
The picturesque village of Eidfjord set within the breath-taking Hardangerfjord, is a gateway to some of the region's most spectacular natural features. Eidfjord is possibly the most beautiful place in the Norwegian fjords. Located beneath a back-drop of soaring, snow-peaked mountains, engraved with rivers and waterfalls, Eidfjord simply cries out to be photographed. The village’s tranquil feel extends to the lush fields that run for miles, meandering through clusters of wood-slat homes in ice-cream hues.

Two quaint churches, one dated back to 1309, are both worth exploring, while the cute Troll Train offers a 50-minute guided tour of this stunning region. From the train you can experience Eidfjord’s exquisite scenery and Hæreid, the largest Viking burial site from the Iron Age.

Hiking is very popular in the area, and for those keen sports enthusiasts, kayaking down the dramatic, mountain-flanked fjords is a must-do. Alternatively, visitors can head for the amazing Hardangervidda Nature Centre or the infamous Voringfossen Waterfall, a tumbling natural beauty set deep in the mountains of Måbødalen Valley. 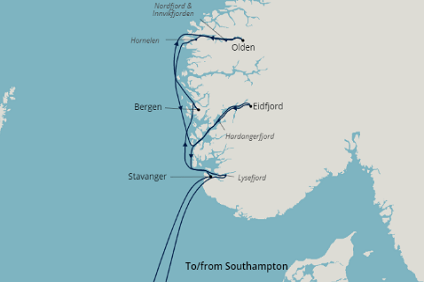