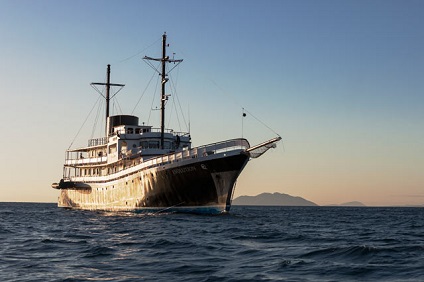 Today we fly to San Cristobal Island in the Galapagos in the morning. Flight time is just under two hours from the mainland. Upon arrival we board M/V Evolution where you will have lunch and a quick briefing en route to our first visitor sites: Isla Lobos.

PM: Lobos, lives up to its name of -Sea Lion Island- with its noisy population of frolicking and barking beasts. It lies just a short navigation north, up the west coast of San Cristobal, separated by a channel that forms an inviting lagoon. This is where you'll have your first chance to share the water with a playful colony of the "wolves of the sea". From lobos we should have views of Kicker Rock, a spectacular formation that rises 152 meters (500 feet) out of the Pacific. It takes the form of a sleeping lion, but from another angle you can see that the rock is split, forming a colossal tablet and, piercing the sea, a great chisel ready for etching.

After this visit you have time for a shower as we get ready for our welcome cocktail and our first formal briefing before dinner. (lunch, dinner)

AM: In the morning we visit South Plaza Island, one of the smallest yet most colorful islands in the Galapagos. Yellow land iguanas wander through bright red carpet weed, waiting from prickly pears to drop from green cactus. Orange sally lightfoot crabs dot the blackened lava above the landing site, all surrounded by turquoise waters. We'll see swallow tailed gulls nesting along the up-tilted end of the tiny island, while red-billed tropicbirds, frigatebirds and shearwaters fly in dancing displays. You''ll also have the chance to see blue footed boobies along the cliff's edge.

PM: Early afternoon snorkeling at Punta Carrion followed by a visit to Mosquera. While Mosquera is little more than a large sandbar, it is home to a playful colony of sea lions. (breakfast, lunch, dinner)

AM: Morning visit to Chinese Hat Islet, a fairly recent volcanic cone; it has the shape of a down-facing Chinese hat. On the rocky shoreline of nearby Santiago, Galapagos penguins are often seen. There is a small sea lion cove on the north shore, where boats anchor and land at the visitor site. Late morning snorkeling with sea lions and penguins and swimming opportunities in the cove.

PM: Afternoon visit to James Bay, where we land on a black beach with intriguing eroded rock formations. A trail leads to a series of crystal-clear grottos with a natural bridge formed of broken lava tubes. This is the best place in the Galapagos to see fur seals and equally best place to see samurai like marine iguanas feeding in tidal pools nearby. You will find a colony of sea lions here and Galapagos hawk frequent the area. Snorkeling offers encounters with Green Sea Turtles and tropical fish. (breakfast, lunch, dinner)

AM: Tower Island could serve as a film set for a secret submarine base! The southern part of the island is an ocean-filled caldera ringed by the throat of a sizeable and mostly submerged volcano. The island sits to the northwest, slightly removed from the Galapagos archipelago. It is also known as "Bird Island," and Darwin Bay, where we land first, lives up to that name in a spectacular way! A gorgeous tidal grotto forms the backdrop to the gaggle of nesting and soaring seabirds birds and path leads up to the rookery cliffs for views of the bay and colonies of gulls, tropic birds and frigates.

PM: Take time to kayak beside the walls of the sunken caldera before our afternoon visit to Prince Philips Steps. This is the best Galapagos landing site to see red footed boobies, comically perched by wrapping big red feet around tiny branches. We walk a short distance to seek out short eared owls preying on swarms of storm petrels. The snorkeling at the foot of thesteps is amazing with large, brightly colored tropical fish taking on a neon quality against the black lava background. (breakfast, lunch, dinner)

AM: Morning visit to North Seymour Island which is teaming with wildlife! Cliffs only a few meters high form the shoreline are home to swallow-tailed gulls. A tiny forest of silver-grey Palo Santo trees stands just above the landing, where a trail will take us to see sea lions, marine iguanas, blue footed boobies, pelicans, magnificent frigatebirds and land iguanas.

PM: Afternoon visit to Santa Fe Island, home to one of the most beautiful and sheltered bays of the archipelago, and to some of the best snorkeling - with its crystal clear waters. Certainly one of the best locations to see sea turtles, swim with sea lions and glimpse of the Galapagos White-tipped Shark. After a wet landing you will walk up to a nearby cliff to see the land iguanas through an area of Opuntia Cactus. (breakfast, lunch, dinner)

AM: Floreana has had a colorful history: Pirates, whalers, convicts, and a small band of somewhat peculiar colonists—a Baroness among them—who chose a Robinson Crusoe existence that ended in mystery and death. We visit Post Office Bay, where in 1793 British whalers set up a barrel as the island's Post Office, to send letters home on passing ships. A stairway leads down into a natural lava cave where you can literally swim in a grotto under the ocean!

PM: Afternoon visit to Punta Cormorant which offers two highly contrasting beaches; a green-olivine beach and an iron-red beach. Between the two beaches is a salt lagoon frequented by flamingoes, pintails, stilts and other wading birds. Late afternoon snorkeling at Devil's Crown, which is home to a myriad of marine species including a variety of corals, pencil sea urchin, wrasses, angelfish and amberjacks - making for some of the best snorkeling in the Galapagos. (breakfast, lunch, dinner)

AM: Santa Cruz is the second largest island in the Galapagos and its capital, Puerto Ayora, is the economic center of the Islands. In the afternoon we visit the Charles Darwin Research Station to visit the Giant Tortoise and Land Iguana Breeding and Rearing Program. Here we used to find Lonesome George (now deceased), the last of his particular race of tortoise.

PM: Afternoon visit to the Highlands, where the dry coastal vegetation transitions to lush wet fields and forests overgrown with moss and lichens. Our destination is the Tortoise Reserve, where we will have chances see these animals in the wild and explore a lava tube. (breakfast, lunch, dinner)

AM: Today our Galapagos cruise comes to an end, but before we bid farewell to the Evolution and her crew we pay a visit to Black Turtle Cove, a beautiful mangrove estuary where we quietly drift in our panga to see spotted eagle rays, diamond shaped mustard rays, white-tipped reef sharks, pacific green sea turtles and a large variety of shore birds. Next we head to Baltra Island airport for the flight back to the Ecuadorian mainland. (breakfast) 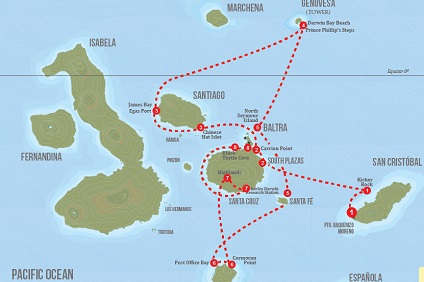