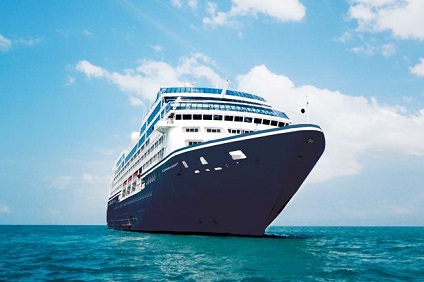 17 Night Cruise sailing from Southampton to Copenhagen onboard Azamara Quest.

17 Night Cruise sailing from Southampton to Copenhagen onboard Azamara Quest.

With its centuries-old seafaring history, Southampton is a fitting place to begin your voyage. Then, board the Azamara Quest® for a day at sea indulging in world-class amenities.

Cruise to Stavanger, where Viking-era history meets the modern world. In Eidfjord, be awed by steep fjord walls and glittering glaciers. Speaking of glaciers, your next stop, Olden, sits at the edge of the Jostedal Glacier, Europe’s largest ice floe. Next, admire the architecture of Alesund.

Indulge in fine dining and Broadway-caliber entertainment during another day at sea before docking in Svolvaer, with its impressive Lofoten Islands scenery. Cruise through the 2-kilometer Trollfjord, then to Tromso to admire snowy mountain peaks and Honningsvag, the last village before the North Cape. Sail through the North Cape to Alta, one of the world’s most northern cities. Harstad’s brightly colored homes and Bodo’s mountain peaks will glow around the clock in the midnight sun. After another day at sea, enjoy an overnight stay in Bergen, where you can hike Mount Floein or peruse the fish market. Wrap up your voyage with a final day onboard the Azamara Quest® before disembarking in Copenhagen, a medieval city with a modern twist.

Southampton, England
Muse on voyages past as you sail in or out of Southampton, long a maritime center, its yards turning out warships for king and country from the Hundred Years War in the 14-15th centuries, to two world wars in the 20th. It was the departure point for the Mayflower in 1620, and for the ill-fated Titanic in 1912. The charms of London are not far away, but pray tarry in the south to explore other wonders, including Bath, with its natural hot springs and stunning architecture and the mysterious megaliths of Stonehenge, or venture all the way west to Lands End, and the wild moorlands and pirate haunts of Cornwall.

Stavanger, Norway
Stavanger is a fascinating blend of old and new: from the Middle Ages when Vikings ruled the seas to today’s North Sea drilling platforms that have made Norway one of the world’s leading oil producers.

Eidfjord, Norway
This quiet little hamlet is dwarfed by the outsized scenery that surrounds it: steep fjord walls, sparkling crystalline glaciers, foaming waterfalls, and an endless expanse of mountain tundra traversed by herds of reindeer.

Olden, Norway
Travel to a world of towering glaciers, cascading waterfalls, and deep mountain valleys when you arrive in Olden. The most adventurous will want to tackle the Briksdal, a million-year-old glacier that takes you across a wooden bridge for a breathtaking view. Not feeling up to the hiking challenge? Relax in a boat upon an enchanting lake with ancient mountains providing an unforgettable backdrop.

Alesund, Norway
Just a stone’s throw away from the spectacle of Geirangerfjord, Alesund is renowned for its architecture, where turrets, spires and other whimsical Art Nouveau touches give the town its distinctive character. Tackle the 418 steps to the look out point on Mount Aksla and be rewarded with sweeping views of the charming town, majestic fjords, and rugged Sunmore mountains.

Svolvaer, Lofoten Islands, Norway
Experience everything nature has to offer when you travel to Svolvaer in the Lofoten Islands of Norway. Marvel at the glacial rock formations of the Lofoten archipelago set against beautiful beaches and sprawling green fields. Visit picturesque fishing hamlets, partake in incredible bird watching opportunities, and catch a glimpse of enormous whales feeding in nearby waters.

Tromso, Norway
They say there’s no view like the one you get from the top of the world, and you can experience it for yourself in Tromso. Take a cable car up Storsteinen Mountain to take in snow-capped peaks and fjords. Afterward, venture into town and visit the Arctic Cathedral, an architectural marvel that resembles an iceberg rising high above the surrounding buildings.

Honningsvag, Norway
Honningsvag, population 4,000, is the last village before the North Cape. No one lives permanently at the North Cape itself, but many come to visit this majestic cliff, rising over 1,000 feet above the sea, providing a lookout over a limitless panorama stretching silently to the North Pole. Ingeniously concealed inside the cliff is North Cape Hall, where you can ponder the vastness in comfort.

Alta, Norway
Tucked deep in the majestic Altafjord, this city above the Arctic Circle shines in the light of the midnight sun. The local Sami people are warm and welcoming, and outdoor adventure abounds. Visit a cathedral inspired by the enchanting Northern Lights, play archaeologist and discover ancient rock carvings, and explore Europe’s equivalent to the Grand Canyon.

Bodø, Norway
Live it up in the land of the midnight sun. Bodø offers a breathtaking escape to a world of natural wonder just north of the Arctic Circle. Rich in natural beauty but with a fun mix of urban activity, there's plenty of adventure to be had, no matter your travel style. Head out of the city to Kerringjoy and experience life at the edge of the Earth.

Bergen, Norway
Head to the old town neighborhood of Bryggen, a UNESCO world heritage site, and wander along quaint street lined with colorful wooden buildings that house unique shops and restaurants. And don't forget about fjords! Take a ride up the funicular to Mt. Floyen, for views of these impressive natural wonders and the city below—or set out on an excursion to see them up-close.

Copenhagen, Denmark
Fairy-tale architecture and avant-garde modern designs create an enchanting atmosphere in Scandinavia's largest city. Copenhagen's quality of life is exceptional, with countless green spaces and bicycle paths—offering you every opportunity to take in the culture and cuisine of the City of Spires. 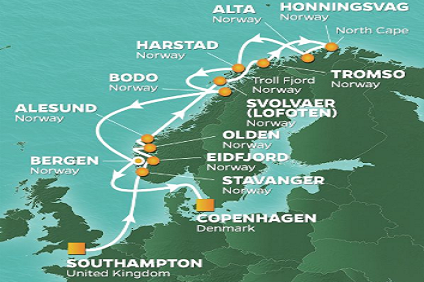