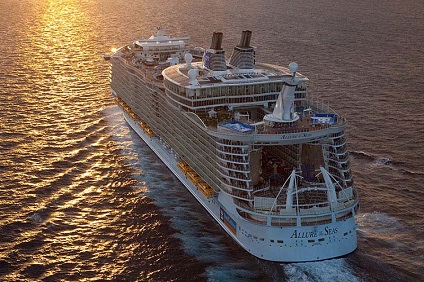 7 Night Cruise sailing from Barcelona roundtrip aboard Allure of the Seas.

7 Night Cruise sailing from Barcelona roundtrip aboard Allure of the Seas.

Allure of the Seas has just been named Best Cruise Ship by Travel Weekly readers for the second year in a row. But this isn't just a cruise ship. It's an adventure that sails way ahead of the curve. Explore seven singular neighbourhoods, from the winding paths of Central Park to the ultimate rush of the Pool and Sports Zone. Surfing. Ziplining. Ice-skating. 3D movies. Come and seek all this and more on Allure of the Seas – your biggest holiday yet.

Barcelona, Spain
Barcelona is located in the northeastern part of the country, 90 miles south of the French border. People from all around the world enjoy visiting this city for its individuality, cultural interest and physical beauty. When Hans Christian Andersen visited in 1862, he remarked that Barcelona was the 'Paris of Spain'. You're likely to agree. The city is a major cultural centre with a fascinating history. Everywhere are archives, libraries, museums and buildings of interest - plus superb examples of modernist and Art Nouveau décor and architecture.

Palma De Mallorca, Spain
Palma de Mallorca is the largest of the Spanish Balearic Islands in the Mediterranean and is located just off the east coast of Spain. The island's coastline is marked by a series of small caves and beautiful beaches. Palma de Mallorca is the capital city of the Balearic Islands and nearly two-thirds of the total population live in Palma. The number of people greatly increases in spring, as the island is a favourite European resort.

Provence (Marseilles), France
Located on the southeastern coast of France on the Mediterranean, Marseilles is the oldest city in the country and second largest after Paris. Thanks to its long and unique past – Greek sailors originally settled the city back in 600 B.C. – this bustling port is filled with history and amazing architecture. It's also one of the most picturesque ports in the country, with fantastic views and scenic backdrops.

La Spezia (Florence/Pisa), Italy
The port city of La Spezia is surrounded by spectacular Tuscan scenery. Set off from here to explore Florence - the birthplace of the Italian Renaissance and home to world-class art galleries, museums and dining. Take in the architectural wonder of The Duomo (Santa Maria del Fiori), discover Galileo's first telescopes at the Science Museum, or sneak in some shopping at the San Lorenzo Market Stalls. If you've already visited Florence, head to nearby Pisa to see its famous bell tower, or enjoy a hike through the lovely villages of Cinque Terre.

Civitavecchia (Rome), Italy
Civitavecchia is the gateway to all the magnificence of the ancient city of Rome. Whether it's the Forum, the Sistine Chapel, the Pantheon or St Peter's Basilica that sparks your interest and intellect, Rome is home to a lifetime's worth of historical, architectural and spiritual sites. Depending on traffic, the drive from Civitavecchia to Rome takes approximately an hour and a half.

Naples (Capri), Italy
Naples is not only picturesque, it's also one of the world's greatest cultural centres, filled with extraordinary works of art and architecture in the classical Greek and Roman style. Several interesting tours are available of the city itself and the fascinating places that lie just outside of Naples.