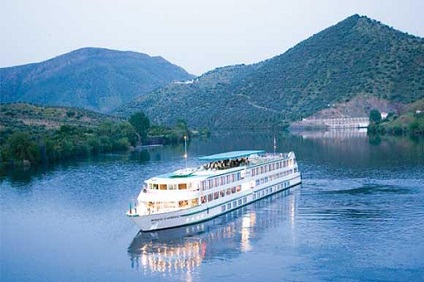 Embark on a cruise through the heart of authentic Portugal and explore beautiful and unspoilt areas such as the Alvao or Douro Nature Parks and the Portuguese vineyards. Our hiking and walking programs offer you the opportunity to contemplate the natural beauty of these magical places. Far from the hustle and bustle of city life, this cruise is ideal for the nature and scenic enthusiasts.

Oporto
Oporto (Porto) is a city in northern Portugal and is the second largest city in Portugal. One of the most beautiful towns on the Iberian peninsula, Oporto is enchantingly situated on the great gorge of the Douro River in northern Portugal. It is famous for its world-renowned wine "Port," made in the upper Douro valley by a process practiced nowhere else in the world.

Porto’s historical centre was awarded World Heritage status by UNESCO in 1996. The city is extremely hilly, with many buildings built into a cliff face that overlooks the river. Stairs cut into the stone run up and down the cliff face and offer a laborious but rewarding walking tour. Across the river from Porto proper, in the suburb of Gaia, are located the warehouses of notable companies dealing with Port Wine, such as Cálem, Fonseca, Sandemans, Kopke, and others.

Regua
Regua commonly known as Régua, is a city and a municipality in Portugal. The municipality is composed of 12 parishes, and is located in the district of Vila Real. Backed by the Serra do Marão mountains and overlooking the wide valley of the River Douro, Regua is a peaceful town and wine growing region.

Régua is the official centre of the Port wine growing region. From here, barrels of wine were traditionally transported to Vila Nova de Gaia in the past using wooden sailing ships called rabelos. Today, the journey is made by road using specially-adapted tankers.

Vega De Terron
Vega de Terron is located along the Douro River in Spain. It is a launching point for the ancient city of Salamanca, a UNESCO world heritage site.

Attractions in Salamanca include the twelfth century San Martin Church, which was built in the Romanesque style. Other attractions include the Augustinian Monastery, Monterrey Palace, and the Art Noveau and Art Deco Museum Casa Lis.

Pinhao
Pinhao is one of 19 parishes located in the Alijo municipality in the Norte Region of Portugal. It is situated at the confluence of the Douro and Pinhao rivers, 22km upstream from Peso da Regua.

Marking the end of the “port wine trail,” Pinhao is a typical rustic Douro town. Of interest is the Azulejos [glazed tile] decorated railway station. From here, one can see the dramatic landscaped vine-clad terraces, dotted with white quintas where the wine is produced and bottled.