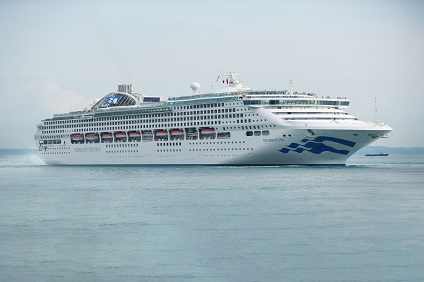 Not long ago, Sea Princess was updated to include The Sanctuary®, a secluded oasis just for adults, rendering this ship a relaxed, rejuvenating retreat at sea. Whether you’re cutting into a juicy steak cooked to order in the dining room, or enjoying the luxury of a special breakfast just for booking a suite, you’ll be taken care of onboard as you sail to fascinating destinations all over the world with Sea Princess.

Fremantle, Australia
Lying at the mouth of the Swan River, historic Fremantle - founded in 1829 - is your gateway to Perth, the capital of Western Australia. Situated on the banks of the Swan River some 15 miles upriver from Fremantle, Perth is a bustling city where soaring high-rises co-exist with elegant sandstone buildings from the colonial era. Life here moves at a slower pace, so during your visit, relax and savor the bounties of Western Australia, from the wonders of the bush to the wineries of the Swan Valley, from excellent shopping to a leisurely cruise on the Swan River.

Lombok, Indonesia
The crystalline waters of the Lombok Strait separate the island of Lombok from its neighbor Bali. For experienced travelers, Lombok will seem a throwback to Bali''s halcyon days - reminiscent, indeed, of that island some 30 years ago, before globalization brought a steady stream of development to its shores. Like its neighbor, Lombok is renowned for its traditional craft villages. Artisans produce the exquisite brocaded cloth called songket, elegant woodcarvings, and superb pottery made from local hillside clays. The island also possesses great natural beauty, from the dramatic rice terraces and plantations of the south to the tropical rain and cloud forests of the north. Lombok is home to Mt. Rinjani, Indonesia''s second highest peak, a magnificent volcano soaring over 12,000 feet above sea level.

The Lombok Strait is part of the Wallace Line - a major eco-geographical boundary separating the flora and fauna of East Indonesia and Australia from West Indonesia. Many species found on Lombok, for example, are not found on neighboring Bali, just 20 miles away across the strait.

Komodo Island, Indonesia
Komodo lizards quietly thrived in the harsh climate of Indonesia's Lesser Sunda Islands for millions of years until their existence was discovered about 100 years ago…when Dutch sailors encountered the creatures for the first time, they returned with reports of fire-breathing dragons. Reaching 10 feet in length and weighing over 300 pounds, Komodo dragons are the world's largest and heaviest lizards. The best place to view these magnificent and endangered creatures is on Komodo Island, the largest island in Komodo National Park, a UNESCO World Heritage Site and Man and Biosphere Reserve.

Note: Komodo Island is a tender port. Due to National Park restrictions, passengers will only be allowed onto Komodo Island if they are part of an organized tour. Please make sure you take bottled water, hat, sun screen and wear comfortable walking shoes.

Ujung Pandang, Indonesia
Once the dominant trade center of eastern Indonesia in the 16th century, Makasar enjoyed its status as one of the largest cities in Southeast Asia. As the island's spice trade flourished so did the infringing reach of foreigners. Finally, early in the 17th century, the Dutch successfully invaded. Today, it's a bustling city once again thriving on an endless supply of exciting attractions, fun activities and lots of charm. While change has brought many hotels, villas, markets and shops, you can still watch local fisherman unloading their catch from charming boats called pinisiq or stroll the serene grounds of Fort Rotterdam, a living testament to the Dutch colonial period.

Semarang, Indonesia
Across the Kedu Plain from the port of Semarang on Java stands one of the great manmade wonders of the world: the temple at Borobudur. The largest Buddhist temple in the world, Borobudur lay covered in volcanic ash for nearly a millennium until it was rediscovered in 1814. For nearly a century afterward, treasure hunters and souvenir seekers pillaged the ruins. In 1973, UNESCO supervised a 10-year restoration of this, one of the most awe-inspiring sights on the planet.

When the King of Siam visited Borobudur in 1896, he was presented with eight cartloads of relics taken from the temple complex, including 30 relief panels and five statues of the Buddha.

Note - Due to large tidal changes that take place in Semarang, there will be times during the day when a portion of the dock is submerged. An elevated platform will be in place from the ship gangway to the bus parking area.

Bali (Benoa)
For over a century, Bali has fascinated the Western imagination. The island embodies the very essence of the exotic and mysterious East. Steep hillsides of tropical green reveal terraced rice paddies while plantations of coffee, banana, cacao and fragrant spices line the roads. Monkeys haunt the grounds of a sacred temple in a forest, while traditional villages produce intricately stylized batik, superb jewelry and beautiful paintings. And Balinese dance, with its angular movements and rhythms, remains somehow stirring and shocking. Bali may be accessible, but it remains forever exotic.

For all Bali's scenic beauty, the island has weathered great natural disasters, from the 1963 eruption of Mt. Agung to a massive earthquake in 1976. The island emerged relatively unscathed from the great tsunami of 2004.

Geraldton, Australia
The capital of the Batavia Coast was founded in 1850 as a commercial port serving the Northampton lead mine some 30 miles to the north. While Geraldton remains one of Western Australia's major ports, the city has become a magnet for vacationing Australians. Located between the Chapman and Greenough Rivers, Geraldton boasts a superb Mediterranean climate, scenic beauty and pristine beaches. Coronation Beach has become an international destination for windsurfers.

In 1692 the Dutch East India Company Batavia was shipwrecked on the offshore Abrolhos Islands. Calamity was followed by mutiny and murder. The lurid tale ensured this portion of Western Australia would be named the Batavia Coast.

Note: Geraldton is an anchorage port. Passengers transfer to shore via ship's tender. 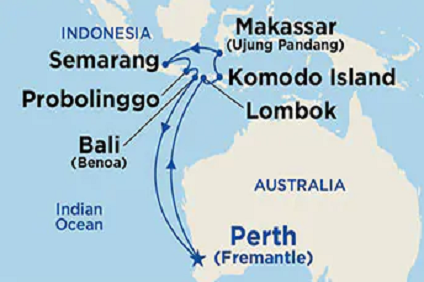