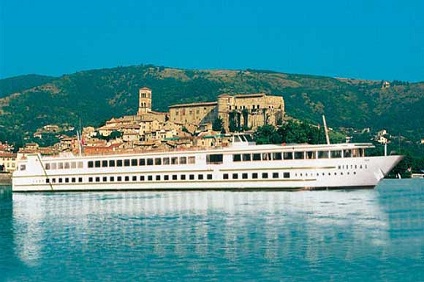 From Martigues to Lyon via Arles, the Camargue, Avignon and Tain l'Hermitage, go on an unforgettable cruise. Visit The Chauvet-Pont-d'Arc Cave which contains some of the best-preserved figurative cave paintings in the world, as well as other evidence of Upper Paleolithic life. In the coolness and the humidity it offers, you can be fully immersed through sound and olfactory worlds. Discover Lyon, a UNESCO World Heritage city, which retales 2,000 years of history through its old cobbled streets.

Martigues
Martigues is a commune northwest of Marseille. It is part of the Bouches-du-Rhône department in the Provence-Alpes-Côte d'Azur region on the eastern end of the Canal de Caronte. The charm of its canals, its docks and bridges has given it the nickname "The Venice of Provence".

Martigues is a mixture of narrow streets, pedestrian walkways and shopping areas. It features an eclectic collection of shops and markets accented by a drawbridge, beach area and some excellent cafés. There are three parts to Martigues: L'Isle, Jonquières and Ferrières. L'Isle is more picturesque than Ferrières, and Jonquières has the best collection of shops and markets. Each of the three parts is accented by its own steeple.

Arles
Arles is a city and commune in the south of France, in the Bouches-du-Rhône department, of which it is a subprefecture, in the former province of Provence. The city has a long history, and was of considerable importance in the Roman province of Gallia Narbonensis. The Roman and Romanesque Monuments of Arles were listed as UNESCO World Heritage Sites in 1981. The Dutch post-Impressionist painter Vincent van Gogh lived in Arles in 1888-1889 and produced over 300 paintings and drawings during his time there.

Arles has important remains of Roman times, which have been listed as World Heritage Sites since 1981. They include the Roman theatre, The arena or amphitheatre, The Alyscamps (Roman necropolis), The Thermes of Constantine, The cryptoporticus, The obelisk and the Barbegal aqueduct and mill.

Lyon
Lyon is the third largest city in France and centre of the second largest metropolitan area in the country. It is the capital of the Rhone-Alpes region and the Rhône département. The city is known for its historical and architectural landmarks and is a UNESCO World Heritage Site. Lyon was historically known as an important area for the production and weaving of silk and in modern times has developed a reputation as the capital of gastronomy in France.

Lyon is shaped by its two rivers, the Rhône (to the East) and the Saône (to the West), which both run North-South. The main areas of interest are Fourvière hill, Vieux Lyon (Old Lyon), Presqu'île, Croix-Rousse, Confluence, Part-Dieu, Brotteaux, Guillotière, Etats-Unis and Vaise.

There are many sights of interest in Lyon including the Roman ruins on the hillside near the Fourviere Basilica with the Ancient Theatre of Fourvière, the Odeon of Lyon and the accompanying Gallo-Roman Museum, the Amphitheatre of the Three Gaul and the roman ruins of an amphiteatre. There are many churches dating back to the Middle Ages and Renaissance and buildings built in the 17th and 18th century.

Chalon-sur-Saone
Chalon-sur-Saône is a commune in the Saône-et-Loire department in the region of Bourgogne in eastern France. It is situated on the banks of the Saone in the heart of the 'route de vin' from Beaune to Cluny. You can visit some of the outstanding wine-making villages of the Cote de Beaune including Santenay, Remigny and Puligny-Montrachet.

Chalon's port and riverside quarter is particularly pleasant and well worth investigating. There are four museums worth visiting including Musee Niepce, covering the work of Chalon's famous son Niepce, who invented photography. 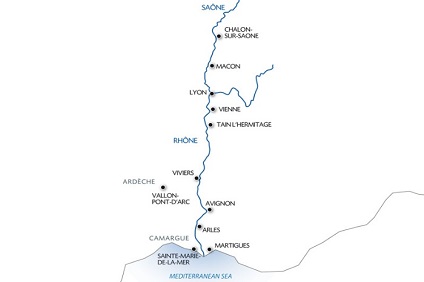