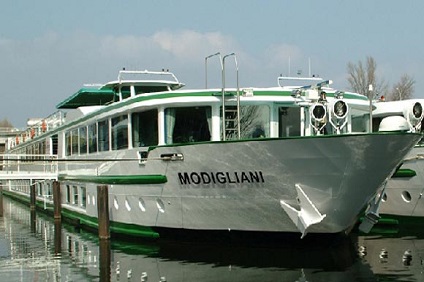 6 Night Cruise sailing from Amsterdam to Strasbourg aboard Modigliani.

6 Night Cruise sailing from Amsterdam to Strasbourg aboard Modigliani.

From Amsterdam to Strasbourg, we'll sail along the Rhine and discover the world's largest flower garden at the Hoge Veluwe Nature Park(4), not forgetting the Kröller Müller Museum(4), home to Van Gogh's second largest collection. Enjoy a perfectly combined cruise between nature and culture.

Amsterdam
Amsterdam, the capital of The Netherlands is built around a concentric network of canals spanned by over 1000 bridges making canal cruises one of the most attractive ways of viewing the city. Many of the houses date back to the 17th century. These narrow-fronted merchants' houses are characterised by the traditionally Dutch ornamented gables.

Cologne
Cologne is situated on the river Rhein in North Rhine-Westphalia and is the fourth largest city in Germany. It is one of the nation's media, tourism and business hotspots.

Cologne Cathedral (German: Kölner Dom) is the city's most famous monument and the Cologne residents' most respected landmark. It is a Gothic church, started in 1248, and completed in 1880. In 1996, it was designated a World Heritage site; it houses the Shrine of the Three Kings that supposedly contains the relics of the Three Magi. Also worth seeing are the city’s twelve Romanesque churches. These buildings are outstanding examples of medieval church architecture. The origins of some of the churches go back as far as Roman times.

Cologne has several museums. The famous Roman-Germanic Museum features art and architecture from the city's distant past; the Museum Ludwig houses one of the most important collections of modern art in Europe, including a Picasso collection matched only by the museums in Barcelona and Paris. The Schnütgen Museum of religious art is housed in St. Cecilia, one of Cologne's Twelve Romanesque churches.

Rudesheim
Rudesheim is a town in the Rheingau-Taunus-Kreis, Hesse, Germany. It is located on the right (east) bank of the Rhine, at the southern entrance to the Loreley valley.

Rudesheim has been famous for its Drosselgasse since the end of the 19th century. Its wine bars and cafes offer non-stop music and dancing. The Castle Broemserburg houses the famous Wine Museum.

Other attractions include the Museum of Medieval Torture, and Siegfried Wendel's Mechanical Music Cabinet, which has an extensive variety of mechanical musical instruments, distributed throughout a 15th century castle.